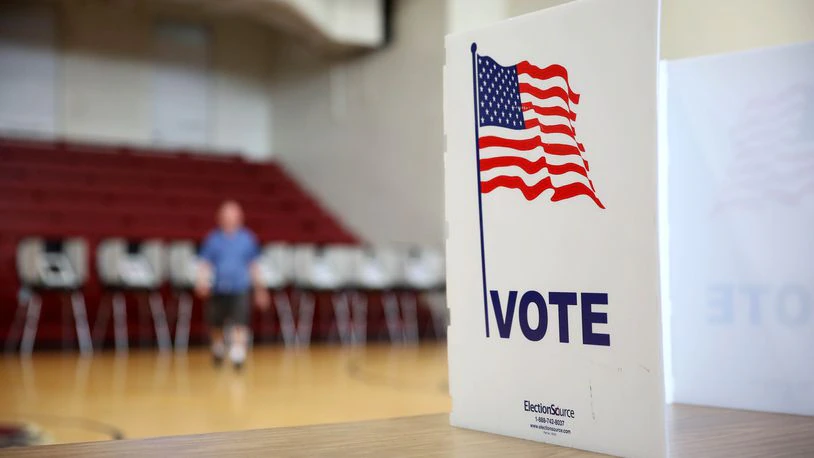 July 24, 2018 – Atlanta, Ga: A voter walks away from the voting booths during the Georgia runoff election voting at Henry W. Grady High School Tuesday, July 24, 2018, in Atlanta. Voters across Georgia are deciding some of the most important races in the state in Tuesday’s runoffs, including runoffs for governor, congress and other elected offices. (JASON GETZ/SPECIAL TO THE AJC)

A candidate running for the top office in Stone Mountain just can’t win, according to state law.

The DeKalb County Voter Registration & Elections Board told The Atlanta Journal-Constitution that Darryl Gresham does not meet the legal requirements to serve as mayor of Stone Mountain even if he receives the most votes. He’s currently running a write-in campaign.

“He did not file a notice of candidacy during the municipal qualifying period or submit documentation to be included on the ballot as a certified write-in candidate,” the board said in a statement.

Gresham did not respond to the AJC’s requests for comment Tuesday.

While it may seem like write-in candidates can get elected by just receiving the most votes, Georgia law lists several requirements to be eligible to hold office. A written notice of candidacy must be filed within seven days of the qualification period for local elections.

In local city races, the candidate must file the paperwork with the county’s election director and have it published in the legal organ for the municipality holding the election. The candidate must also acquire an affidavit stating the notice has been published.

The qualification period for write-in candidates ended Aug. 20 — a week after qualifications ended for candidates to appear on local ballots. Gresham also missed that deadline. He cited a battle with COVID-19 as the reason the deadline was missed on his campaign’s Facebook page.

His campaign website is still collecting campaign donations. It’s unclear how much he raised, but he posted on Facebook that his goal was $20,000. The elections board said campaign finance reporting is overseen by local municipalities. Stone Mountain City Manager ChaQuias Miller-Thornton told the AJC, “The city will look into this matter and has no further comment at this time.”

Patricia Wheeler, the longtime mayor of Stone Mountain, is not running for reelection. Three candidates — Beverly Jones, Andrea Redmond and Eileen Smith — qualified to run for mayor in Stone Mountain and will appear on local ballots.

DeKalb County Voter Registration and Elections Board to Meet October 14