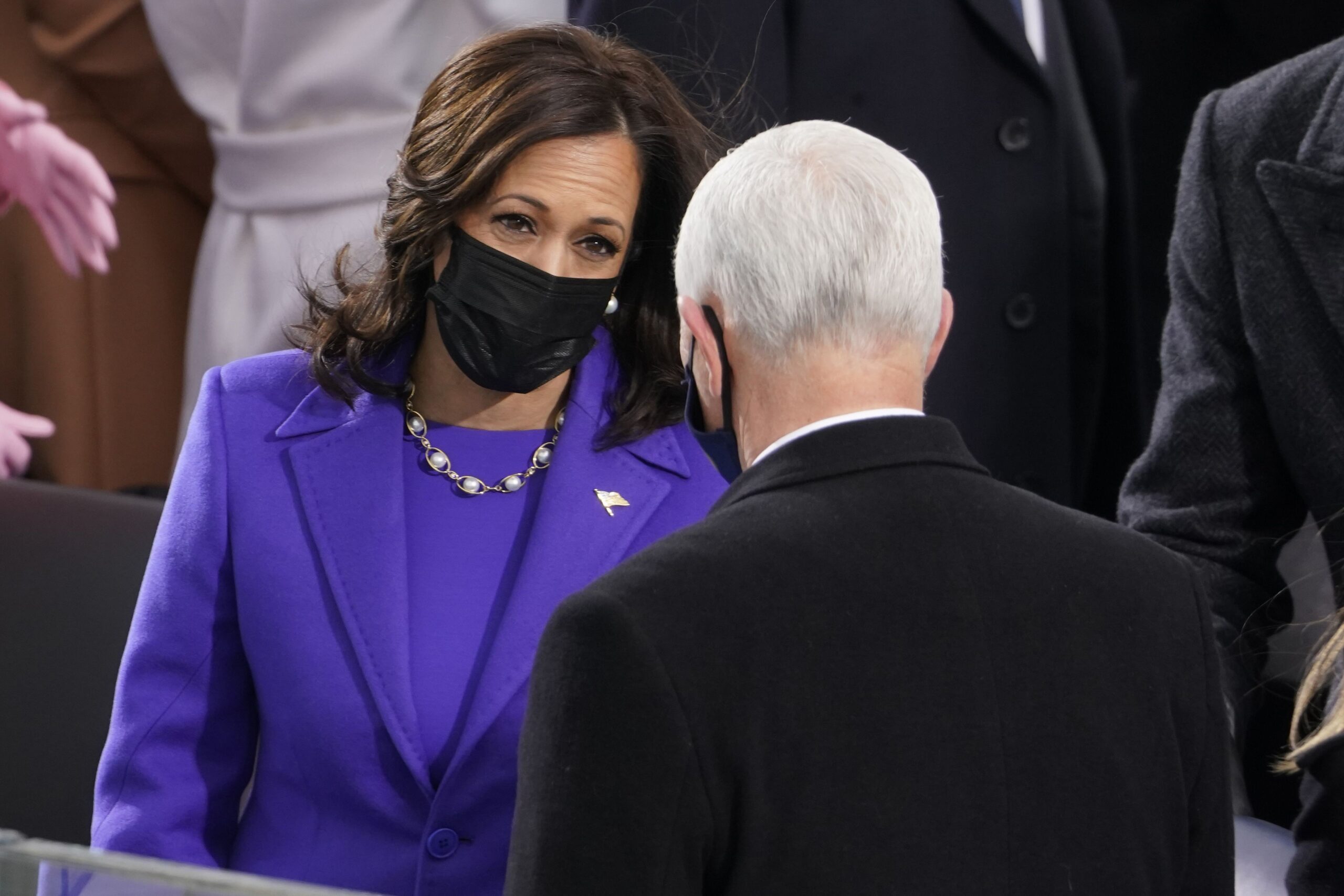 Watch a replay of the Inauguration Day events from the nation’s capital:

With Harris presiding in the Senate, Avril Haines was confirmed as the director of national intelligence, according to reporter John M. Donnelly.

Biden moved swiftly to dismantle Donald Trump’s legacy on his first day in office, signing a series of executive actions that reverse course on immigration, climate change, racial equity and the handling of the coronavirus pandemic. 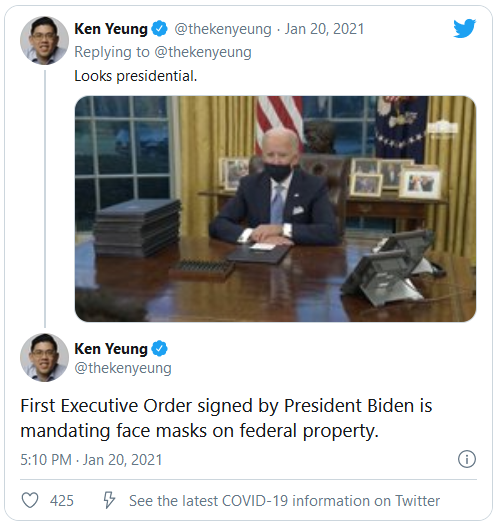 The new president pivoted quickly from his pared-down inauguration ceremony to enacting his agenda. Biden intends to halt construction on Trump’s U.S.-Mexico border wall, end the ban on travel from some Muslim-majority countries, rejoin the Paris Climate Accord and the World Health Organization and revoke the approval of the Keystone XL oil pipeline, according to aides.

The 15 executive actions amount to an attempt to rewind the last four years of federal policies with striking speed.

A photo of the president’s late son, Beau, was seen behind Biden in the Oval Office. 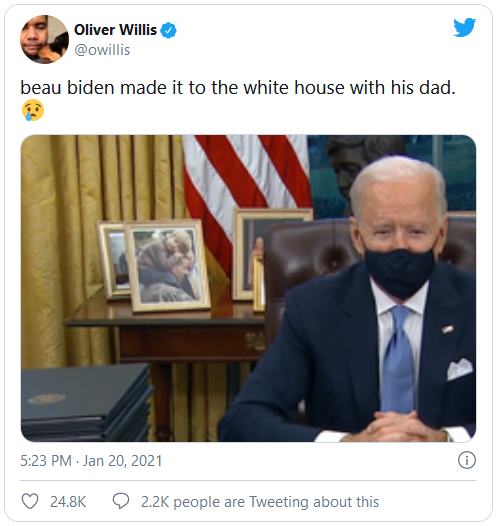 Harris arrived about 4:50 p.m. to preside over the Senate session.

Biden made his first official arrival at the White House as president about 3:55 p.m. after a short walk down Pennsylvania Avenue.

The new president shared a memo with lawmakers detailing additional executive actions on Jan. 29, including restoring asylum protections and setting up a task force to reunify families separated at the border, according to reporter Ted Hesson. 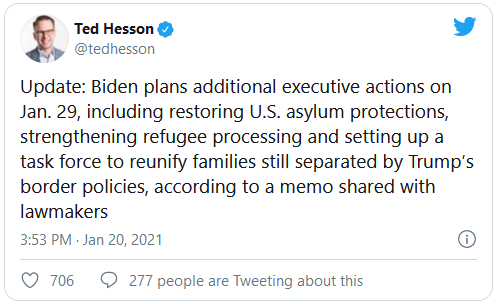 The day included musical performances from Lady Gaga, Jennifer Lopez and Garth Brooks. Celebrated poet Amanda Gorman read a piece noting that, “while democracy can be permanently delayed, it can never be permanently denied.”

Biden was expected to sign paperwork in the President’s Room within the Capitol. Afterward, he reviewed troops outside the Capitol before departing and traveling to Arlington National Cemetery for a ceremony with former presidents in attendance.

Biden’s inauguration ceremony began at 11:15 a.m. Former Presidents George W. Bush, Barack Obama and Bill Clinton attended. The other living former president, 96-year-old Jimmy Carter, previously announced he would not attend. Trump also did not attend, leaving the White House about 8:15 a.m. and returning to his Florida home, shortly before Biden was inaugurated. 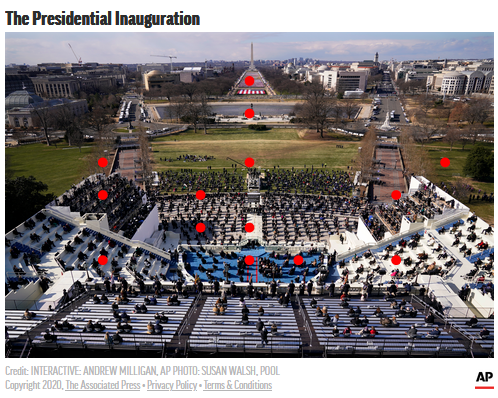 Harris, a former California senator, was sworn in before Biden, becoming the first female and person of color to become vice president.

Biden, who, at 78, is the oldest ever elected president, declared “democracy has prevailed” in his inaugural address. He swore the oath of office to take the helm of a deeply divided nation and inherited a confluence of crises arguably greater than any faced by his predecessors.

Biden called on Americans to overcome their divisions, declaring “without unity, there is no peace.” He also pledged he would be honest with the country as it continues to confront difficulties, saying that leaders have an obligation “to defend the truth and defeat the lies.”

He asked even those who did not vote for him to give him a chance. He said, “Hear me out as we move forward.”

He added, “We must end this uncivil war that pits red against blue.”

Immediately after the inauguration, Biden tweeted that he was headed to the Oval Office to get to work.

Biden and his wife arrived at the Capitol on Wednesday morning about 90 minutes before his noon swearing-in ceremony. They were accompanied by Harris and her husband, Douglas Emhoff, and were greeted by U.S. Sen. Amy Klobuchar of Minnesota.

The president-elect’s motorcade wound its way through a mostly deserted Washington following a morning church service at the Cathedral of St. Matthew the Apostle. Streets that would typically be lined with thousands of inaugural onlookers were ringed instead with a massive security presence to include military vehicles and armed troops.

About 25,000 National Guard members have been dispatched to Washington following the violent melee at the U.S. Capitol two weeks ago.

At Biden’s invitation, the first couple was joined by a bipartisan group of members of Congress, including all four top-ranking members of congressional leadership: Senate leaders, Republican Mitch McConnell and Democrat Chuck Schumer, as well as House Speaker Nancy Pelosi and House Republican Leader Kevin McCarthy.

Many presidents have chosen St. John’s Episcopal Church, sometimes called the “Church of the Presidents,” for the inaugural day service. Biden is the second Catholic U.S. president, and St. Matthew’s is the seat of the Catholic archbishop of Washington. Biden spent Tuesday night at Blair House, a traditional move ahead of a president’s inauguration.

Biden and the rest of the officials left the church about 10 a.m.

“It’s been a great honor, the honor of a lifetime. The greatest people in the world, the greatest home in the world,” Trump told reporters before heading to Marine One, rotors whirring, on the South Lawn.

“We love the American people, and again, it has been something very special. And I just want to say goodbye but hopefully it’s not a long-term goodbye. We’ll see each other again.”

Later in the morning, before boarding Air Force One for a flight to his Florida home, Trump said he thinks Biden’s administration will have “great success” and has the “foundation to do something really spectacular.” He made brief farewell remarks at Maryland’s Joint Base Andrews.

Trump told cheering, chanting supporters he will watch and listen from a distance. He promised he will be back “in some form” and wished the crowd a “good life” before he and his wife boarded the plane.

On Tuesday night, Biden arrived in Washington with a speech at the Lincoln Memorial, calling for a national mourning for those lives lost to the coronavirus pandemic.

“To heal we must remember,” the incoming president told the nation, as 400 lights representing the pandemic’s victims were illuminated behind him around the monument’s Reflecting Pool. “Between sundown and dusk, let us shine the lights into the darkness … and remember all who we lost.” Biden was joined by Harris.

Biden flew into Joint Base Andrews just outside the capital and then motorcaded into Washington, a city that’s been flooded by some 25,000 National Guard troops guarding a Capitol, White House and National Mall that are wrapped in a maze of barricades and tall fencing.

Inaugural organizers this week finished installing some 200,000 U.S., state and territorial flags on the National Mall, a display representing the American people who couldn’t come to the inauguration, which is tightly limited under security and COVID restrictions.

Rich Barak of The Atlanta Journal-Constitution contributed to this report.