White House warns of ‘deterioration’ in Georgia as virus rages in U.S.

Workers walked up and down a line of cars to gather individuals personal information before they proceeded to take a COVID19 test at a DeKalb County Department of Health COVID-19 drive-thru testing site in Doraville, Tuesday, Nov. 17, 2020. (Alyssa Pointer / Alyssa.Pointer@ajc.com)

Nearly every state in the nation is now in the red zone for new coronavirus cases, as COVID-19 surges from coast-to-coast, according to the latest report from President Donald Trump’s coronavirus task force.

Georgia is faring better than all but three states, but public health experts warn that cooler weather and social gatherings tied to next week’s Thanksgiving holiday could be accelerants that turn a smoldering epidemic in the Peach State into an inferno.

“We are not in good shape, and many parts of the country are doing so much worse,” said Dr. Harry J. Heiman, a clinical associate professor at the Georgia State University School of Public Health. “But that’s the direction that we, too, are headed if we don’t get more aggressive and make efforts to take charge.”

For the second week in a row, Georgia remained in the red zone for the rate of new cases and now is in the orange zone, or the second most severe category, for test positivity. Cases continue to climb in Georgia, but the state improved its new case ranking, dropping from 40th to 48th — or third best — overall because conditions have deteriorated faster in other states.

As it has in recent weeks, the task force report, dated Sunday, warned of asymptomatic and pre-symptomatic spread, particularly in social gatherings, as cool weather pushes people indoors and friends and families plan holiday events.

“The silent community spread that precedes and continues to drive these surges can only be identified and interrupted through proactive, focused testing for the identification of both asymptomatic and pre-symptomatic individuals and significant behavior change of all Americans,” the White House report warned. “Ensure masks at all times in public, increase physical distancing through significant reduction in capacity in public and private indoor spaces, and ensure every American understands the clear risks of ANY indoor interactions outside of their immediate household without masks.”

Forty-eight states now sit in the COVID-19 red zone for cases as the coronavirus surges to new daily case highs and hospitalizations and deaths climb across the nation.

Georgia’s summer surge, which peaked in July, strained the state’s health care infrastructure and led to thousands of deaths. But cases fell for more than two months before starting to climb again.

Georgia has since reported an increase in cases in five out of the past six weeks.

The seven-day rolling average of new confirmed cases in Georgia has nearly doubled since bottoming out Oct. 2. The rolling average of people currently hospitalized for the disease has risen by a third since Oct. 12, an Atlanta Journal-Constitution analysis of state data shows. 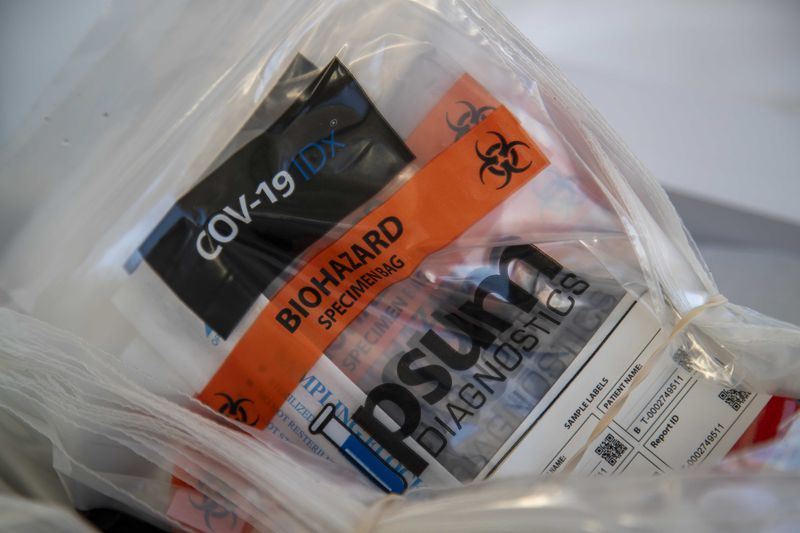 While metro Atlanta counties reported the highest raw number of new coronavirus cases, according to the White House report, some in north Georgia and a few in far south Georgia have among the highest case rates on a per capita basis.

On Tuesday, Georgia reported 3,603 net new cases, the highest daily total since Aug. 8, and 924 new probable cases as determined by rapid antigen tests. The state’s Tuesday report was inflated, in part, by a computer issue that prevented the Georgia Department of Public Health (DPH) from reporting the full new case figures on Monday.

To date, the state has reported 391,466 confirmed cases, 39,105 probable cases as determined by rapid antigen tests and 8,496 confirmed deaths.

Though the current rolling average of confirmed new infections is about 40% below the summer peak, it’s about three times greater than it was on Memorial Day, the first major holiday after Gov. Brian Kemp reopened the state.

The current rolling average also does not include antigen tests, so actual infection rates are likely higher.

Two vaccine candidates — one by Pfizer and another by Moderna — show promising signs and could soon receive emergency use authorization by the U.S. Food and Drug Administration. But widespread availability of those vaccines is likely months away, experts say, and people need to act to protect themselves now while the threat of infection grows.

The U.S. has repeatedly shattered daily records of new cases, hospitalizations have hit new highs in nationally and in many states and deaths also are climbing.

Health experts have said the cooler months ahead could be bleak in Georgia if residents do not heed warnings to wear masks, practice social distancing, wash hands, get a flu shot and avoid gatherings, particularly in poorly ventilated spaces.

Public health experts have urged residents to limit the size of Thanksgiving gatherings and to minimize travel.

“Our case numbers are increasing in Georgia, as they are throughout the country, so people need to look for ways to celebrate safely by modifying their plans,” said DPH spokeswoman Nancy Nydam. “That may mean getting together virtually or limiting gatherings to only a few people, however even small gatherings are now contributing to the increase of cases.”

Georgians should consider the risk of COVID-19 on the elderly and people with pre-existing conditions in their holiday plans, she said.

Georgia also will be the center of national politics in the run up to two U.S. Senate runoff elections on Jan. 5. Heiman said candidates and political groups should heed public health guidelines for social distancing, and not hold events indoors and without masks.