‘We are headed for a crisis’: hospital beds dwindle as virus cases soar 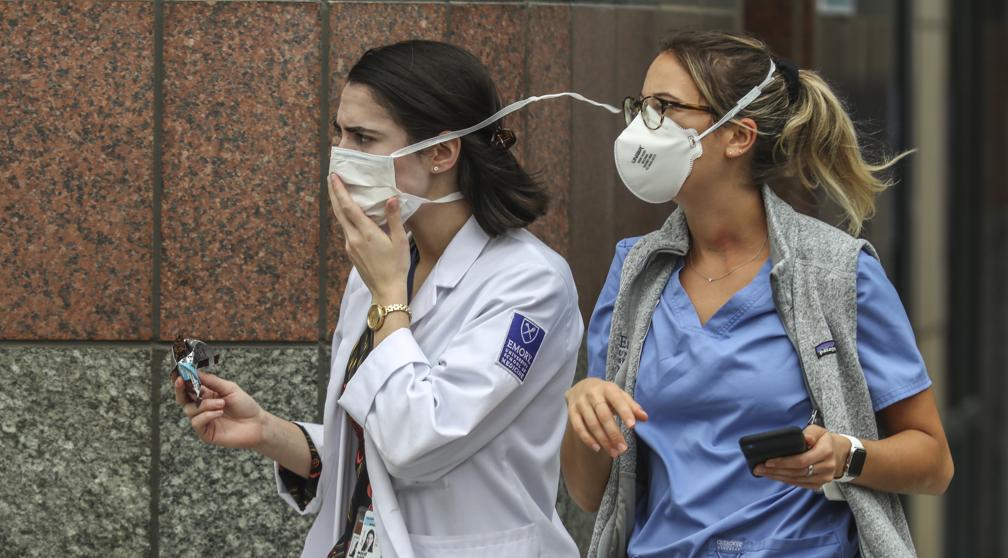 The number of hospital beds available to treat critically ill patients is dropping across Georgia as COVID-19 hospitalizations soar past previous highs, raising alarms that time is running out to slow the spread of the virus before medical facilities reach crisis levels.

Meanwhile, the share of open critical care beds is down to the single digits around Athens, Columbus, Tifton, and a three-county region including Cobb, Douglas and Paulding, data from the Georgia Emergency Management and Homeland Security Agency shows.

Wellstar Atlanta Medical Center’s ICU reached capacity Tuesday. Emory Health Care’s number COVID-19 patients tripled in two weeks. Grady Medical Center broke its prior record for COVID-19 patients Wednesday, all while it copes with the highest number of trauma cases in its history, its administrators said. The escalating demand on hospital beds is also showing up in a sharp spike in requests for protective gear.

The drop in available beds for the critically ill took place quickly. Just before the Fourth of July weekend, none of the regions that make up the state’s hospital emergency response network had critical care bed availability of less than 15%.

“We are headed for a crisis as hospitalizations now have passed the prior peak,” said del Rio.

“It isn’t a matter of individual rights, constitutional rights or the law,” said Jansen. “It’s about what to do as a responsible citizen to protect yourself and protect other people.” Dr. Jansen said.

Nearly 510 ICU beds are open across the state, or about 18% of the total, according to GEMA data. About 17% of general inpatient beds are free.

While the number of new COVID-19 cases has reached record levels, there are some reasons to be optimistic that they won’t overwhelm Georgia hospitals. Industry-wide changes mean hospitals are more accustomed to running with fewer beds than they did a generation ago, experts said. The early months of the pandemic gave them practice at re-purposing beds, staff and equipment to devote to COVID-19 patients.

Since then, certain drugs have been shown to reduce the chances of critical symptoms or death, although these medicines are in short supply, noted Dr. Stephen Thacker, associate chief medical officer for Memorial Health in Savannah. The coastal hospital reached an all-time high for COVID-19 patients on Wednesday with 57. Savannah’s mayor mandated wearing masks late last month, but many of Memorial’s patients come from outside the city, Dr. Thacker said.

This new wave of patients is younger, which means they’re less likely to have severe diabetes, cardiovascular disease, obesity and other conditions that make them more likely to need critical care or die, experts said. From April to June, hospitalizations in Georgia for patients with the virus between the ages of 18 and 29 rose 34% while plummeting 61% for people over 50, according to Georgia Department of Pubic Health data.

“It’s part of the story of why hospitalizations are increasing, but the death rate is not,” Dr. Thacker said.

Younger people are also recording the state’s fastest increase in new cases, mirroring other Southern states such as Texas and Florida which, like Georgia, took the lead in reopening their economies. 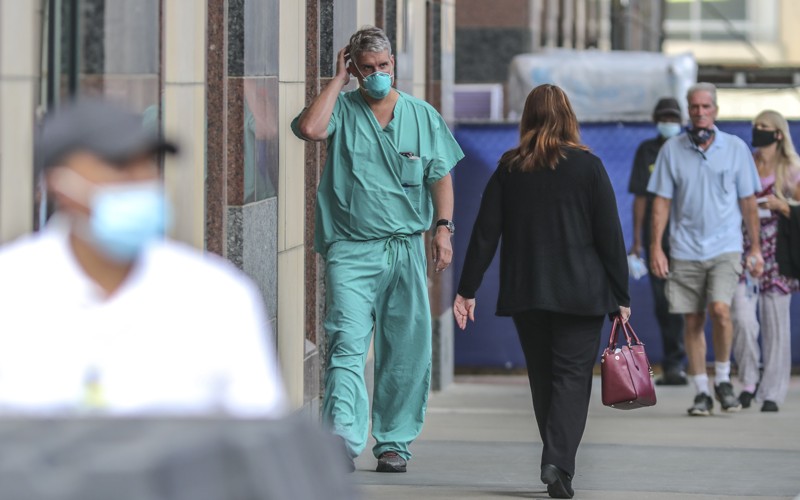 Dr. Chris Sadlack (center) walks outside Grady Hospital in downtown Atlanta on Thursday, July 9, 2020. Grady who along with other local hospitals are seeing a surge in new patients as cases reach record highs in Georgia. Grady is also experiencing a spike in trauma care patients. Photo: The Atlanta Journal-Constitution, JOHN SPINK/JSPINK@AJC.COM
Still, some of these young people are so sick they need ventilators to stay alive, said Dr. Bruce Ribner, medical director of Emory University Hospital’s Serious Communicable Diseases Unit and professor of infectious diseases at the Emory University School of Medicine. A few are dying.

“If they think that just because they’re in their 30s or 40s that they are immune from severe disease, I would like to show them around our ICU,” Dr. Ribner said.

When hospitalizations hit a lull in June, Ribner’s hospital had returned specialized intensive care units that it had converted to treat COVID-19 patients to their original uses. Now it’s beginning to convert them back again.

“We’re hoping that reason will take over and the numbers (of COVID-19 cases) will stabilize, but we’re planning that this outbreak is about as bad — if not worse — than what saw in April or May,” Dr. Ribner said.

COVID-19 patients need more sedatives than others on ventilators, Dr. Ribner said, so they’re keeping close tabs on their availability. They also tend to be sicker than typical ICU patients, so they’re ready to provide additional staffing per shift.

Treating these patients also requires far more personal protective equipment, Ribner and others noted, so Emory is stocking up. There are signs that other medical providers are joining them.

Requests for personal protective equipment through national grassroots supply network #GetUsPPE have climbed 310% in Georgia in recent weeks, mostly from hospitals, said Edward Aguilar, CEO of Project Paralink, an Alpharetta-based group that uses the network to provide free face shields across the U.S.

Some of the increase is because of better outreach, #GetUsPPE officials said. But initially, Aguilar and business partner Shourya Seth thought the increase was the result of panic buying. Then they talked to the people ordering them, Aguilar said.

Facilities are working to gear up statewide. GEMA did not make its officials available for an interview, but said it is creating an additional 80 non-critical COVID-19 beds at the Youth Challenge Academy in Milledgeville. The surrounding hospital emergency response region has 13% availability of critical care beds.

GEMA said it also helped stand up three temporary medical units at various hospitals, but its spokespeople did not provide specifics.

Wellstar runs Atlanta Medical Center, which is at full ICU capacity; and Kennestone Hospital, the regional coordinating hospital for Cobb, Douglas and Paulding counties, which is at 6% availability of critical care beds. The company said in a written statement that it is working on capacity issues and still has “a limited number of staffed ICU beds available within our hospitals at this time.” It did not provide specifics.

In Macon, Navicent Health’s patients who need hospitalization are are primarily over 60, its CEO and Dr. Ninfa M. Saunders said in a press release, but the majority of those testing positive at its facilities are younger. Its temporary 24-patient unit to treat COVID-19 patients remains open at The Medical Center, the region’s coordinating hospital. Critical care bed availability has dipped to as low as 9% in recent days.

Piedmont Healthcare runs the regional coordinating hospitals in the Columbus and Athens areas, where available critical care beds dipped to 9% and 4%, respectively. It declined to release its current COVID patient numbers saying it is against company policy to release such figures for any disease, but urged patients to continue to seek heath care.

“It’s alarming that we continue to see people in our communities unnecessarily avoiding needed health care — even emergency care — when it’s a life-threatening situation like stroke or heart attack where every minute counts,” Piedmont’s administrators said in a written statement.

These patients with diabetes, lung disease and heart failure who put off treatment in March and April are among the patients who are filling up Grady beds, Dr. Jansen said. They’re sicker and cannot wait any longer.

Usually, hospitals like to run with 15% critical care bed availability so they have leeway to manage a surge, he said. Now Grady is running at 95% to 98% capacity.