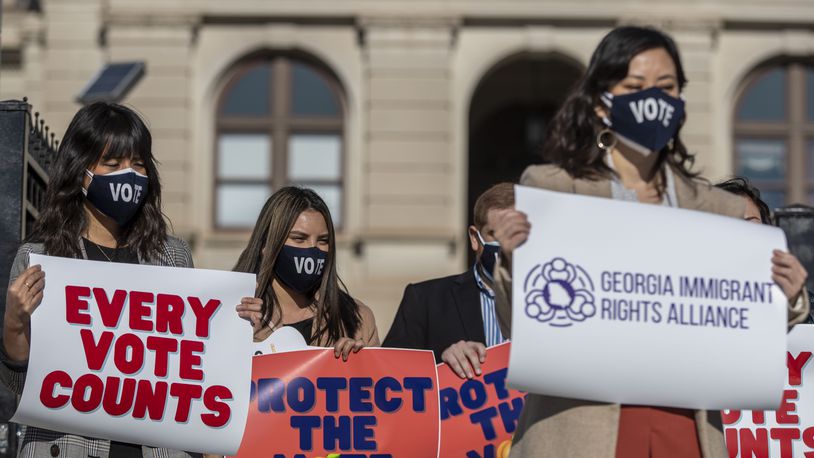 WASHINGTON — Democrats in the U.S. Senate have revised a proposal to create national standards for elections and voting, a final bid to come up with a plan that they hope could gain enough support from Republicans to pass.

But the new measure includes many of the same provisions that are in a sweeping election bill known as S. 1 or the For the People Act, which Republicans blocked from proceeding earlier this year. And some of the language in the latest proposal targets election laws passed in Republican-led states, which could make it harder for conservative senators to lend their support.

The bill reflects input from a group of eight Democrats, including West Virginia’s Joe Manchin, who is one of two lawmakers who have resisted calls to revise the filibuster rule that requires 60 votes to move forward on a bill. Some Democrats and voting rights groups have cited the need for stronger voting rights protections as a reason to do away with the rule.

Georgia Sen. Raphael Warnock, one of the architects of the legislation, said the bill is intended to blunt the impact of laws passed in Georgia and other states by creating national standards for voting and new protections that make it harder to kick voters off the rolls or disregard their ballots.

“We are providing a federal standard that ensures that voters have access to the ballot regardless of where they live,” he said.

Without at least 10 Republicans willing to vote with Democrats to allow the measure to proceed, the new bill will fall short of the 60-vote filibuster threshold.

U.S. Senate Leader Chuck Schumer of New York said he will bring the measure up for a vote as early as next week.

First, he wants to give Manchin time to try to persuade Republicans to support the bill, a tall order given Republican resistance to previous versions. Some of Manchin’s Democratic colleagues hope that eventual rejection of the compromise by Republicans will help change Manchin’s mind about ending or limiting the filibuster.

“The fact of the matter is that this legislation is critical for stopping some of the most egregious assaults against voting rights happening at the state level,” the New York Democrat said.

McConnell said he and other Republicans continue to oppose efforts to create national voting and election standards, which they say would infringe on the rights of states.

“There is no reason for the federal government to take over how we conduct elections,” he said. “It is a solution in search of a problem, and we will not be supporting it.”

Schumer cited several examples of why he believes the law is needed, including a provision in Georgia’s law that prohibits passing out food and water to people standing in line to vote. Georgia Republicans passed that law partially in response to baseless claims by supporters of former President Donald Trump that the 2020 general election was riddled with fraud.

The new bill, called the Freedom to Vote Act, includes much of the language found in S. 1 when it comes to limiting voter purges and allowing people to register to vote and cast a ballot the same day, and creating national standards for early voting, voting by mail and the use of drop boxes.

There are some changes. The latest proposal no longer requires states to conduct redistricting through independent commissions, although it creates national standards in hopes of preventing partisan gerrymandering. In Georgia and many other states, partisan legislatures redraw voting district lines every 10 years.

The new measure also adds language that would make it harder for election officials in Georgia and other states to take over local election boards. It bans the removal of an local election administrator except for “gross negligence, neglect of duty, or malfeasance in office.”

It also says that only state or local election officials would be able to challenge a voter’s eligibility. This counters Georgia’s SB 202, which allows any Georgia voter to challenge the eligibility of an unlimited number of voters. And it requires states to count absentee ballots received up to seven days after an election.

The proposal would create national standards for ballot and voting machine security before and after elections and requires post-election audits. In theory, that could address some of the concerns raised by Republicans after the 2020 election.

Warnock has been reluctant to back a change to the filibuster rule, but he has said that Senate policies should not get in the way of passing voting legislation.

“There is plenty here to like on both sides of the aisle, and so we welcome our Republican counterparts in the places where they want to make suggestions — I’d like to hear them,” he said. “I think the American people deserve better from them than simply, ‘no.’”