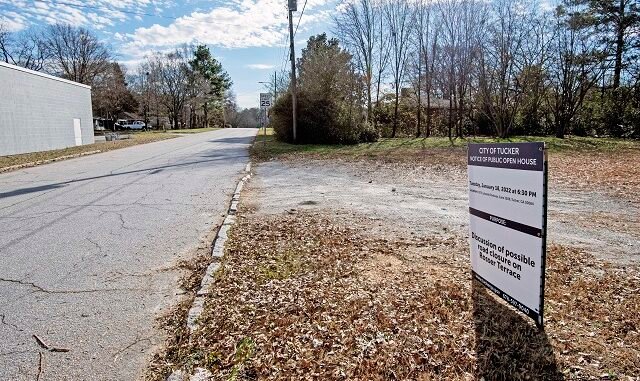 A plan by Chick-fil-A to build a new three-lane drive-thru restaurant in Tucker at 4435 Hugh Howell Road, the former site of Greater Good BBQ, has met resistance from residents of Rosser Terrace. Photo by Dean Hesse.

After a heated meeting at Tucker City Hall on Jan. 18, there may be no way to satisfy residents of Rosser Terrace – short of eliminating the plan for Chick-fil-A to build a three-lane drive-thru restaurant at 4435 Hugh Howell Road.

Residents peppered the city with questions about a proposal to close off Rosser Terrace with a gate just south of the potential entrance to Chick-fil-A. Held by Tucker Planning and Zoning Director Courtney Smith and City Engineer Ken Hildebrandt, the city was asking for feedback from residents and nearby business owners.

“How much opposition do we have to have in order to stop Chick-fil-A altogether?” Mandy Finch asked.

Rosser Terrace residents have long complained about poor road conditions, speeding vehicles and cut through traffic from Tucker Industrial Road to Hugh Howell. But when Chick-fil-A applied to the city of Tucker to raze the former Greater Good BBQ building and create a bigger drive-thru model, residents became more vocal.

Adding a fast-food restaurant to the entrance of the street will only make the problems worse, said residents. Rosser Terrace has no sidewalks, and some complain it is dangerous for kids to ride their bikes or play on the street.

Several residents demanded Chick-fil-A pay for traffic-calming and sidewalks, but Smith explained that an applicant cannot be asked to improve off-site conditions.

At the May 25 public participation meeting, residents of Rosser Terrace detailed a 2019 traffic study showing the street has 50% more traffic than its intended capacity, and sees speeds up to 51 mph in a 25 mph zone. Others report fleet vehicles using Rosser Terrace as a shortcut between High Howell and Tucker Industrial Road. The street lacks sidewalks, forcing kids, dogs and pedestrians to use the street.

The application for a Special Land Use Permit and variances were heard at Tucker Planning Committee in September 2021, then stalled at City Council after a first read in October 2021.

At the Nov. 8 City Council meeting, Smith asked for a deferral, stating that Chick-fil-A had been “listening to feedback from the community, the boards and commissions. They would like more time to study the site plan and the access to the property.”

Feedback at the Jan. 18 meeting included a proposal that the gate should be accessible to residents with a key pass or code, and a resident who said any solution would be better than the volume of traffic the road experiences now.

“If the street is not [gated] it’s going to be unlivable, not unbearable,” said another neighbor.

Andy Wood, a resident who has been pushing DeKalb County for speed humps, said he’s been trying to engage his neighbors for a while.

“My biggest beef is, how can the city of Tucker allow dumping all that traffic onto a residential street? This is the first time it’s happening Tucker,” Wood told District 1 City Council member Roger Orlando after the meeting.

The city will hold a first read of the Chick-fil-A application on Jan. 24 at City Council.

Read the original story on TuckerOserver.com.