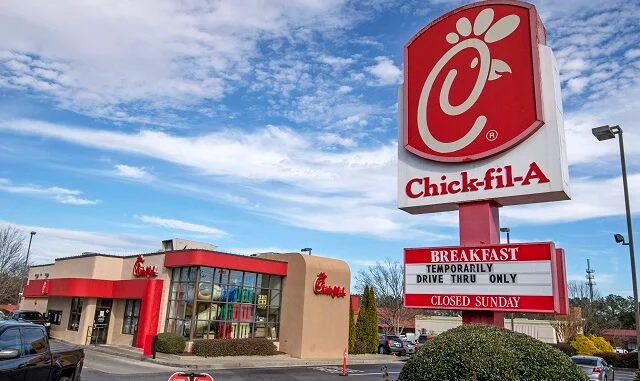 The Chick-fil-A restaurant at 4340 Hugh Howell Road in Tucker on Jan. 19, 2022. A plan to build a new three-lane drive-thru restaurant nearby at 4435 Hugh Howell Road, the former site of Greater Good BBQ, has met resistance from residents of Rosser Terrace. Photo by Dean Hesse.

Will Chick-fil-A revitalize a stretch of commercial property on Hugh Howell Road, or will it make a mess of traffic?

After 13 months of meetings, delays and negotiations, Tucker City Council voted 5-1 to approve Chick-fil-A’s application to move a quarter of a mile down Hugh Howell Road. At the June 13 meeting, councilmember Virginia Rece voted against the Special Land Use Permits and variances, and councilmember Noelle Monferdini recused herself due to a conflict of interest.

The fast food giant will relocate from the hectic intersection of Lawrenceville Highway and Hugh Howell.

The source of an ongoing battle between Chick-fil-A and nearby residents was the access to the property via residential roads Rosser Terrace and Dillard Street, which flank the property.

Rosser Terrance residents said their street, often used as a cut through from Tucker Industrial to Hugh Howell, has long been ignored by DeKalb County. Andy Wood, who lives on Rosser Terrace, has been working for years to get traffic-calming measures to combat excessive speeds and traffic.

“The street is in horrible shape. I’m sure you’ve seen the potholes. The county came out to mark all the things they saw wrong with it, but that’s the last they did,” said Wood, one of the consistent voices fighting Chick-fil-A’s plan.

Wood said District 1 city council members Rece and Roger Orlando did not meet with Rosser Terrace residents about the proposal.

Planning Commission denied recommendation of the plan on May 19. Before the City Council vote, city staff recommended denial of the application.

“Because we haven’t been able to agree on all of the elements of the submitted plan, staff has pulled back and recommended the conditions based on the proposal. Ultimately, you’re going to vote on the application before you, so these conditions are based on what the applicant has submitted,” said Tucker Planning and Zoning Director Courtney Smith. “But because of these changes, staff can no longer recommend approval and recommends denial of the application.”

Smith reported the Georgia Department of Transportation (GDOT) said the intersection of Hugh Howell and Cowan Road is optimized and functioning at its full capacity.

“[GDOT] stated that traffic generated by Chick-fil-A would have a detrimental effect on the operation of the signal as a whole,” said Smith.

Brad Spratte, owner operator of Chick-fil-A in both Tucker locations, spoke at the meeting for the first time. He said 12 years ago, when he bought an abandoned Taco Bell building in the Northlake commercial district, the area was becoming less desirable and in considerable decline.

“When the Northlake Chick-fil-A was built, things began to change. Businesses began to invest, and the area’s thriving today. Chick-fil-A was a catalyst for change then. It can do the same for this area of people today,” said Spratte.

Spratte added, “This is the first step toward a walkable, connected and safer community.” He is also  chair of the Tucker Nortlake CID. Tucker Northlake CID Executive Director Matthew Lee previously said that if he was a resident of Dillard Street or Rosser Terrace, he’d be supporting Chick-fil-A.

From the first public participation meeting, residents have said that Chick-fil-A is a company known for intolerance of the LGBTQ community.

“Chick-fil-A is a corporation with a long history of supporting groups that at best have sought to deny equal rights under the law to our LGBT citizens and at worst has supported groups that advocate violence against them,” said Robert Jenkins, resident of Rosser Terrace.

The property at 4435 Hugh Howell was home to Stage Door, a gay bar that closed in 2009, and more recently Greater Good BBQ.

“The lot in question used to be home to one of the few gay bars on the east side of metro Atlanta. To demolish that building and replace it with a Chick-fil-A would be a slap in the face to the LGBT community,” said Jenkins.