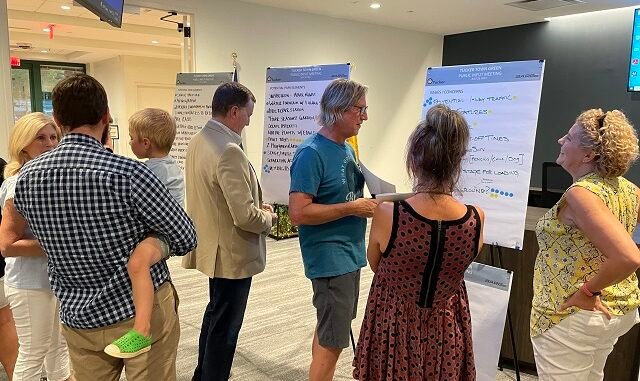 Tucker Parks and Recreation held a public meeting on July 28 at City Hall, kick-starting the design of the city’s newest greenspace.

Located near Second Ave and Railroad Avenue behind The Local 7 restaurant, the land was purchased by the city in September 2021 for $1.2 million. It is about two acres.

The lot is being referred to as Tucker town green, although the name has not been formalized.

About 40 people gathered at City Hall on July 28 to hear from Barge Design Solutions, a company Tucker used to create the city’s parks master plan. Steve Provost, vice president, said the town green will be used for daily activities and special events.

The Tucker PATH will connect on the north side of the park to receive bicyclists and pedestrians.

“The purpose of [the town green] is to be your community’s backyard, where the community comes together,” said Provost.

It was the fourth meeting this summer in a series about the city’s parks, which have included Lord Park, Fitzgerald Field and Johns Homestead Park. Church Street greenspace, also downtown, is being used as a concert venue and festival destination now, but will eventually become City Hall.

After a presentation of nearby city parks demonstrating features like playgrounds, moveable furniture, memorials and water fountains, Provost asked for feedback – even “pie in the sky” ideas.

“As a design team, we are going to show you how these ideas fit on site,” said Provost.

Four-year-old Nate Fisher, who loves to attend city meetings, said he wants slides at the park and drew a map for the planners. Other attendees prioritized lighting, shade trees, restrooms, parking and an entertainment stage. Concerns centered on traffic flow and parking, safety, railroad train noise and drainage.

“I know people are traveling before school begins, but I look forward to hearing ideas and feedback about plans for the town green,” she said.

Lerner said it’s been a long process, but she’s excited about the town green.

“I’m excited that we’re going to have this gathering space right off of Main Street. I was excited to hear the fabulous ideas tonight from the public. I can’t wait to see what we do,” said Lerner.

As early as August Barge will present design concepts at City Council meetings, which are open to the public.