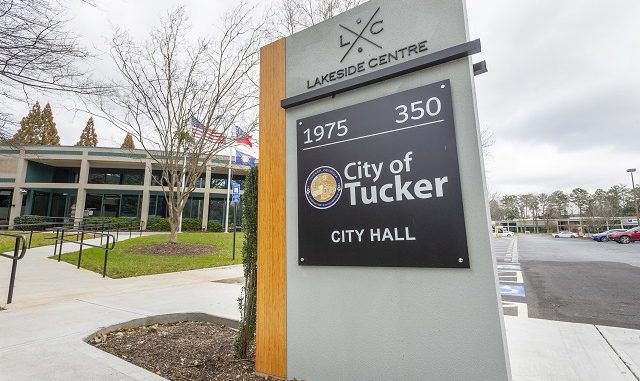 Tucker City Council meetings are still being streamed online, but the June 14 meeting was the first with all council members together in person since March 2020.

Council members unanimously approved an ordinance to allow zoning for an 80-unit rental townhome development on Northlake Parkway at the June 14 meeting.

Developer Steve R. Martin, owner of SDM Partners, agreed to all changes presented by city staff, including an on-site management office and six-foot privacy fence along the property line. The developer is required to install a Marta bus shelter on Northlake Parkway.

Despite feedback from Tucker residents about affordability, the applicant has no plan to allow any Section 8 vouchers. Units being leased for six months are expected to come in at $1.70 per sq. ft., or $2,500 per month.

Recent development in Northlake includes a new Emory Healthcare facility, CDC Federal Credit Union and Fairfield Inn Residential, which is nearing its finish of The Reid at 2190 Northlake Parkway in Tucker. There, a one-bedroom, one-bathroom apartment is listed starting at $1,520 per month. Last month, Tucker City Council heard about potential development in Northlake to include a performing arts center, convention center, hotel, upscale grocer, 800 residential units and 127,000-sq. ft. of commercial space – all surrounding the WSB radio tower.

The city approved hiring a capital projects manager in the Parks and Recreation department, and a planner and plan reviewer in Community Development. The city’s contract with Jacobs Engineering, a company that provides contract employees, will increase from $2,401,263 to $2,586,264 and expire in 2026.

Finance director Robert Porche presented a first read on 2021 tax changes. Tucker is proposing to maintain the same 0.9 millage rate since the city instituted a millage on Parks and Recreation in 2019.  Adopting this rate creates an increase in property taxes by 6.38 percent over the rollback millage rate, due to DeKalb County’s increase in projected revenues.

Mayor Frank Auman said, “It’s a big step for us in the development of the city. Up to now, the city’s had no property tax, no ad valorem tax, no taxes of its own. That was true and that was part of the plan. This step takes us into a place where we’re collecting our own taxes to, in this case, fund our park operations.”

– Thirty-nine new businesses applied for business license in Tucker. Councilmember Pat Soltys said every dollar of property taxes requires approximately six commercial dollars to support one household. “A lot of people don’t realize how important business dollars are to the development and wellbeing of the city,” said Soltys. “Without business support and tax dollars, we couldn’t do half the things we are doing.”