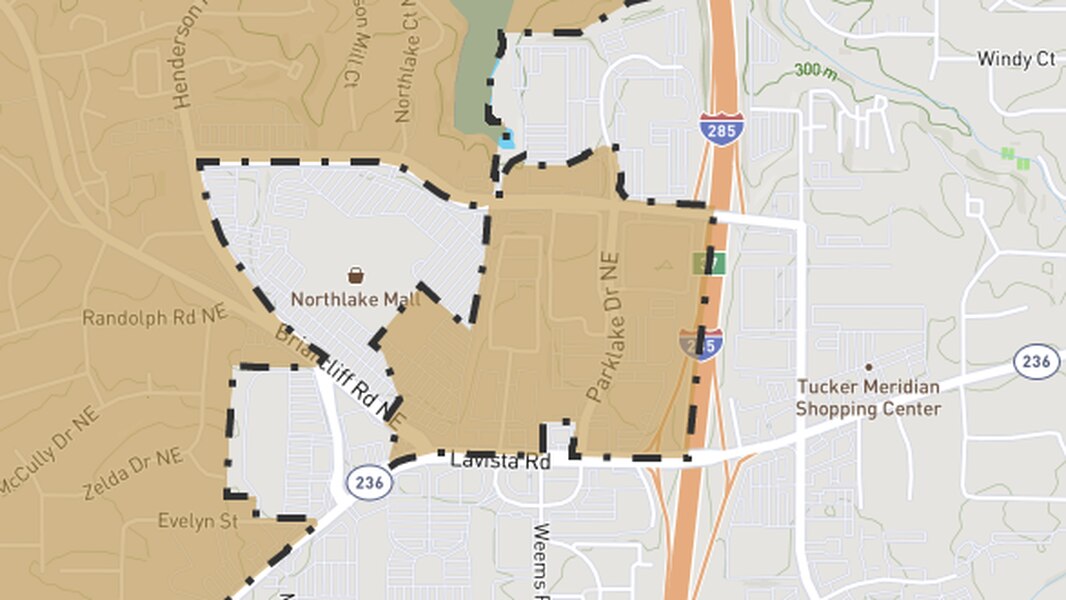 Tucker is asking state leaders to allow the city to annex the area of unincorporated DeKalb that is colored orange on this map. The area is nearly surrounded by Tucker’s current city limits.

Tucker is trying a new tactic to annex more than 67 acres of unincorporated county land that would circumvent owner consent.

The property, which is a mix of multi-family housing and commercial businesses near Northlake Mall, is nearly surrounded by Tucker’s current city limits. The mayor and City Council said those boundaries have led to difficulties with land planning and roadway maintenance.

“We’re building a lot of sidewalks and building a lot of roads,” Mayor Frank Auman said during a Monday meeting. “They (construction crews) have to stop at the city limits, even if it’s in a strange place like the middle of a block or the end of a street.”

City leaders unanimously passed a resolution that asks the state Legislature to approve the annexation, which doesn’t require individual property owners’ approval. Since Tucker was chartered in 2015, it has annexed properties based on public participation — not legislative approval. Northlake Mall was among those annexations.

However, Auman said the city has not been able to get the owners of the 22 unincorporated DeKalb County parcels to pursue annexation on their own.

“We sort of have exhausted ourselves on contacting all of them (property owners), explaining to them why they’d be better off in the city and motivating them to work with us on joining,” he said.

Tucker spokesman Matt Holmes told The Atlanta Journal-Constitution an estimated 2,000 people live in the area. Approximately 20 businesses are also located on that land.

Steve Haden, a resident, questioned why the City Council would want to increase its population, which he said would reduce the level of public service each current resident receives. The city currently has more than 35,000 residents.

“These parcels in Northlake, some of them in the eastern boundary are apartments and whatnot,” Haden said during the meeting. “You’re adding population … does that outweigh that you’re diluting in level of service?”

Councilwoman Anne Lerner said the people who live on that property already likely use city services, including roads, sidewalks and parks.

“Those people are part of our community, whether they are in the city limits or not,” she said. “They use our city services anyway.”

Annexations have been a contentious topic among DeKalb cities over the past few years and have led to a few lawsuits, including one by Tucker against its neighbor Clarkston.

Tucker claims that part of a 14-acre property that Clarkston annexed in 2018 is within Tucker’s city limits. The pending lawsuit has halted Clarkston’s plans for the property — a multi-family apartment development.

“DeKalb particularly has a reputation over the past few years about fighting over annexations,” Auman said Monday. “But this (Northlake) case seems to be a case of why state law is the way it is to rectify an issue and get people the services that they should get.”