Swimming, singing and … social distancing? Summer camps are (sort of) back

With many parents back in offices or returning to job sites soon and their children possibly drained by a year of school on a screen, in masks and in isolation, summer camp has never looked more inviting.

Camps start next month and demand is surging after it plummeted last summer. Supply is tighter than normal, though, as safety protocols limit numbers and as providers that survived the loss of revenue last year scramble to find counselors amid a labor shortage.

“The race is on. Parents are eager to find camp experiences for their kids. Our data has really demonstrated there are more new families looking for camp than ever before,” said Tom Rosenberg an Atlanta resident and president and CEO of the American Camp Association.

Parents are being pulled in different directions, though. On one hand, schools plan to use ample federal stimulus funding to target students for summer “learning loss.” On the other hand, experts say kids need a mental and social break before school resumes in the fall.

Julia McNeal, who spent the past year online, just wants that sleepaway camp experience that she was finally old enough to have last summer. The 11-year-old who lives near Buford had been waiting for over a year to go to Camp Misty Mountain in Armuchee. But COVID-19 forced the Girl Scouts to cancel camp at the northwest Georgia facility.

“She cried. She was heartbroken,” said her mom, Bridgette McNeal, the leader of Troop 16537. “As a parent, there was nothing you could even replace it with. It was like, well, sorry, but we all have to hunker down in this house,” she said.

Julia starts sixth grade in the fall and will attend a summer academic “enrichment” program in June at Twin Rivers Middle School, for students who may have suffered “learning loss” and could use a “head start” on next year, says their emailed invitation from Gwinnett County Public Schools.

It will end just in time for sleepaway camp in July.

“It means I get an experience alone away from home, which I’ve never really had,” Julia said. 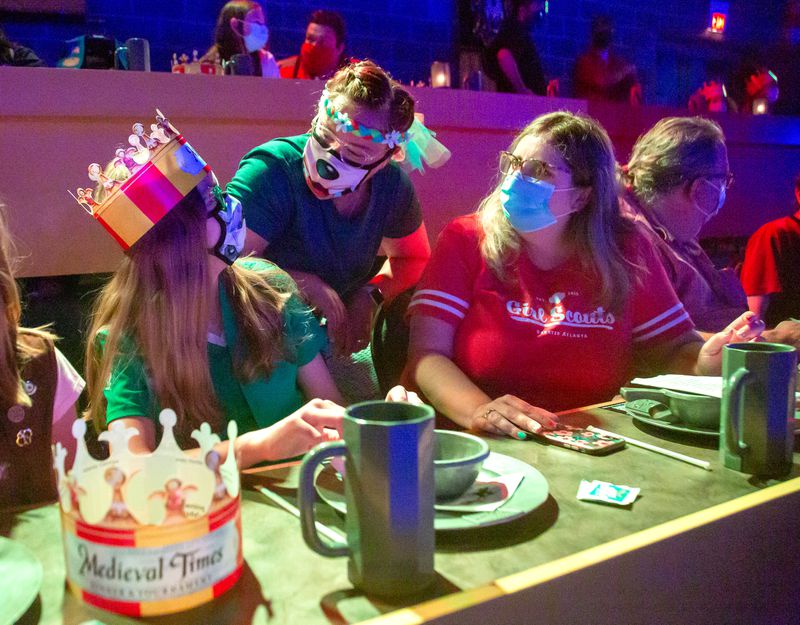 Girl Scouts Troop Leader Bridgette McNeal (right) and her daughter Julia, 11, (left), talk with people while waiting for the Medieval Times show to start at Sugarloaf Mills Mall in Lawrenceville Saturday. McNeal escorted her daughter and other girls there for a troop outing. Julia is looking forward to summer camp. May 22, 2021. STEVE SCHAEFER FOR THE ATLANTA JOURNAL-CONSTITUTION

Like Gwinnett County, other major metro Atlanta school districts are offering classes this summer, in some cases trying to make the experience at least a little fun. Fulton County Schools is updating middle school summer learning to make it “feel like camp,” a spokeswoman said. The Cobb County School District is offering elementary school students reading, writing and math, but also activities such as photography, art and robotics.

At least one Georgia school superintendent hopes to use the federal stimulus money to give kids a break from academics.

“We’re going to take kids to the beach,” said Brownyn Ragan-Martin, the superintendent in Early County in southwest Georgia and president of the Georgia School Superintendents Association.

There will also be field trips to the aquarium in Atlanta and to a swamp, she said. All-expenses-paid trips are typically offered only to gifted and honors students, but Ragan-Martin thinks all of her students need to travel.

“This year has just been terrible for kids,” she said.

Some research shows that children need unstructured playtime for mental and emotional growth. The National Academies of Sciences, Engineering, and Medicine concluded that kids need a balance between structure and free time.

“This may be particularly important as schools increasingly focus on structured academic learning, even in the early grades and as other societal changes, such as increased parental employment and greater digital engagement decrease opportunities for unstructured play,” says the organization’s September 2019 report, which was published six months before the pandemic shuttered schools and forced students online for an unprecedented amount of time.

Parents who just want fun for their kids have a mix of public and private options.

Last summer, the Douglas County Parks and Recreation Department on metro Atlanta’s west side used pickup trucks to deliver giant versions of games such as Connect Four, checkers and chess to neighborhoods and parks where kids were gathering. Playgrounds had to be closed because they couldn’t be sanitized like those games, said Christopher Bass, the assistant department director.

His agency will continue with the giant game deliveries this summer but is also resuming the normal weeklong specialty camps offering activities such as basketball and volleyball. Parents have been signing up far earlier than is normal, so demand may be up, he said.

Most cities and counties are resuming such summer services, said Steve Card, executive director of the Georgia Parks and Recreation Association. “As parents are reentering the workforce they’re needing someplace for their kids to go.”

Operated by a foundation housed at Berry College in Rome, WinShape offers camps in more than a dozen states and some other countries.

The organization normally finds seasonal workers at colleges, but that was difficult this year as some campuses barred visitors or discouraged the kind of gatherings that recruiters organize. The lack of labor has suppressed supply, Witt said. So has the collapse of camp operators who didn’t have a bankroll or donor base to survive the loss of as much as 70% of their revenue last summer, he said. “Some of the smaller camps have definitely been eaten up by this.”

Last year, about 6.5 million kids attended a summer camp in the United States, way down from the 26 million typically served, said Rosenberg of the American Camp Association. Although supply and demand appear to be reaching normal levels, parents who land a spot at camp should expect anything but normal.

Camp operators are planning to continue with masks, social distancing, contained groups and other safety protocols as they await revised guidance from the Centers for Disease Control and Prevention, especially about whether it will be necessary to quarantine vaccinated 12- to 15-year olds exposed to the virus, he said.

The Girl Scouts of Greater Atlanta will be hosting 2,100 girls at one of its three campgrounds this summer. The group is allowing full capacity at day camps where there is ample space to spread out under the sun while canoeing, swimming, horseback riding, geocaching, zip lining and eating popsicles.

But the group notes in a 4-page list of safety protocols published in April that sleepaway camps are limited to 70% capacity. Girls will be sleeping without masks in the cabins, so the bunks must be spread out to keep their heads 6 feet apart.

Other changes include packaged meals and a requirement that masks be worn indoors. Parents must stay in their vehicles during dropoff and pickup, and are being encouraged to vaccinate eligible children. They are asked to upload a copy of the vaccination card.

Amy Dosik, the organization’s CEO, said the information will be useful if an infected child exposes others who may need to be quarantined and sent home.

Heading to the lake? Know the laws to have safe fun in the sun