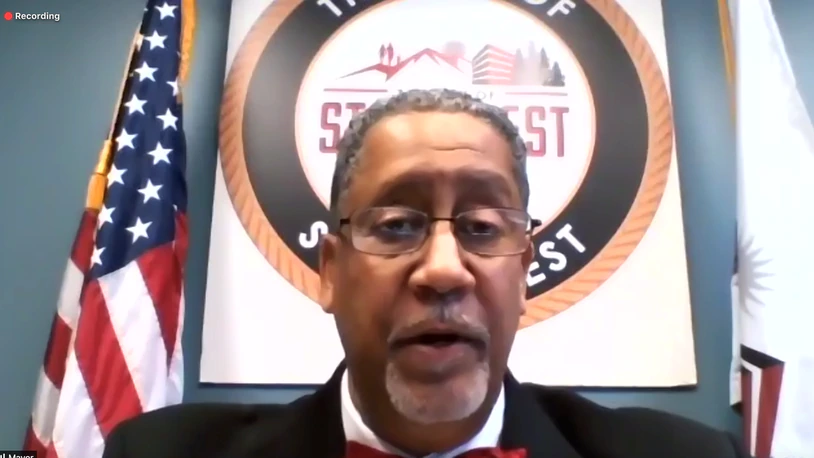 Jason Lary appeared on video Tuesday morning to announce his resignation as the mayor of Stonecrest.

The founding mayor of one of metro Atlanta’s youngest cities announced he would resign Wednesday — just an hour before he’s set to appear in court on federal fraud charges.

Jason Lary, the 59-year-old mayor of Stonecrest, said he would step down effective 10 a.m. Wednesday. An hour after that, he’s scheduled to appear in court to change his not guilty plea.

On Tuesday morning, he held a virtual news conference to announce his resignation and reflect on his years of leadership.

“It’s time for me to retire from politics and really get focused on my health,” Lary said, referencing his multiple bouts with cancer. “… In closing, I ask that you all measure me by the whole story. I did the best that I could do with what we had in place.”

The 45-minute Zoom call, which was hacked during its middle portion, primarily featured Lary reflecting on his role in the founding of Stonecrest in 2016.

In November, federal prosecutors took Lary to court over allegedly defrauding the Coronavirus Aid, Relief and Economic Security (CARES) Act through the use of a kickback scheme. Lary is accused of requiring small businesses and churches that received grants to give 25% of their award to companies connected to himself and co-conspirators.

Prosecutors said Lary helped decided where the relief funds were directed, including an unsolicited $150,000 grant award to his church. In return, the church was asked to give $50,000 to one of the companies, which Lary allegedly used to pay off various personal tax liabilities. Prosecutors also found that $108,000 of relief funds were used to pay off the mortgage on a lakefront home owned by Lary.

Lania Boone, a 60-year-old bookkeeper for the company hired by Stonecrest to distribute its federal relief funds, was also arraigned on a conspiracy charge in the case. She’s the wife of Clarence Boone, the city’s former economic development director who was fired as a result of investigations into the city’s relief program. Her next court hearing has not been scheduled.

Lary previously pleaded not guilty to the charges, but the change of plea hearing signals a likely plea deal. His attorney, Dwight Thomas, teased that result during Lary’s initial Nov. 10 appearance in court by saying, “He accepts full responsibility, and there won’t be a jury trial.”

According to the city’s charter, a special election will take place because Lary’s term was supposed to last through the end of 2023. (He won reelection in 2019 with 55% of the vote.)

Section of Walker Drive to be Closed Jan. 5