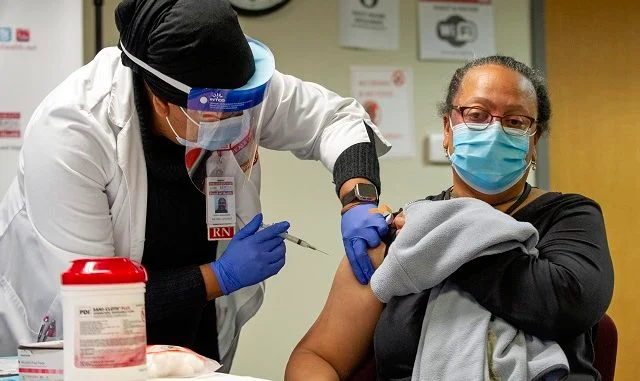 Stone Mountain, GA — The Stone Mountain City Council on Oct. 5 unanimously voted to extend the city’s COVID-19 emergency declaration and will now consider requiring city employees to be vaccinated against the virus.

Less than one-third of the city’s 32 employees are known to be vaccinated against COVID-19, according to City Manager ChaQuias Miller-Thornton. That figure hasn’t changed since last month’s regular council meeting. The city and Oasis Healthcare hosted a virtual COVID-19 vaccine education session for staff on Sept. 28.

“I can’t quite understand … what the reason for this reluctance is,” he said.

The vote to extend the emergency declaration means that council meetings will continue to be held virtually. The vote also directs Miller-Thornton to revise the ordinance in the future to include possible testing and vaccine mandates for city employees. She recommended surveying city staff about the issue.

“This affects them, so we need to hear from them as well,” she said.

Mayor Pro Tem Chakira Johnson said that if the council mandates the vaccine for city employees, it should do the same for council members.

Miller-Thornton will present a revised ordinance to council for discussion at its work session on Oct. 19. The earliest the council would vote on it would be at the November regular meeting.

In other news from Tuesday’s meeting, Mayor Patricia Wheeler was the tiebreaking vote to approve a contract between the city and Southern Sky Fireworks for the Christmas parade on Dec. 4.

Councilmembers Monroe, Gina Cox and Shawnette Bryant voted against it, saying the show — which will last five to seven minutes — is not worth the $4,300 price tag.

The council also unanimously voted to increase its contribution to a project extending the East Mountain Street sidewalk. The city entered into an agreement with the Stone Mountain Memorial Association for the project in 2019, with the city’s half of the payment expected to be $40,000.

The project has now been completed and SMMA said the city’s half ended up being $53,000.

Johnson said the previous city attorney drew up that 2019 contract and that they’ll have better safeguards in contracts for future projects.

“This language did not protect us in this regard,” she said.

The city council also voted to approve an annual $3,000 software license and maintenance agreement for a fingerprint scanning device.

“It’s a mechanism for capturing fingerprints in a digitized format and transporting them to a depository like GBI,” Johnson said. “It’s going to help our officers save time, so they don’t have to go to other agencies to digitize fingerprints.”

The city council also unanimously voted to put 16 wooden picnic tables up for sale. The tables were removed from the city’s parks and replaced with new ones.

The council also voted to move its Nov. 2 regular meeting to Nov. 4 because it conflicts with Election Day.

“Our charter states that we are not to hold a council meeting on the same day as an election, so we have to move the meeting date,” Johnson said.