Stacey Abrams is running for Georgia governor in 2022.

Stacey Abrams launched a campaign for Georgia governor Wednesday with a pledge to fight for economic equality and expand health care access, setting up a potential rematch against Republican Gov. Brian Kemp in one of the nation’s most competitive political battlegrounds.

The Democrat announced her campaign with a video that highlighted her work in the state since her narrow 2018 defeat to Kemp, along with a message that “opportunity and success in Georgia shouldn’t be determined by your ZIP code, background or access to power.”

Her decision, long expected by local Democrats, clears the way for what could be a titanic showdown between two longtime political rivals. That is, if Kemp survives a fight for the GOP nomination first.

Abrams lost to Kemp by less than 1.4 percentage points in 2018, the closest Georgia gubernatorial election in decades, and her refusal to concede defeat because of what she called an “erosion” of voting rights made her an icon to many Democrats and a villain to conservatives.

If Abrams prevails, she would become the first Black governor in Georgia and the first Black woman elected governor in U.S. history. She would also end a string of Republican victories in gubernatorial contests dating to Sonny Perdue’s upset win in 2002 over Democratic Gov. Roy Barnes.

She’s running in a tough political environment. Despite statewide victories in the last election cycle, Georgia Democrats will be on the defensive during the 2022 midterms, when U.S. Sen. Raphael Warnock is also on the ballot. Abrams’ campaign countered by noting Democratic gains in this year’s mayoral elections, including flips of several Republican-held seats this week.

Kemp might as well have ripped a page from his 2018 playbook with his reaction to her announcement, which repeated a stark warning that Abrams’ “far-left agenda” doesn’t reflect Georgia’s values.

“Next November’s election for governor is a battle for the soul of our state,” he said. “I’m in the fight against Stacey Abrams, the failed Biden agenda and their woke allies to keep Georgia the best place to live, work and raise a family.”

Abrams’ announcement ends a guessing game among some Georgians about what she would do next. A former Democratic leader in the Georgia House, Abrams is now a nationally known politician who has been talked about as a future White House contender.

She gave the response to then-President Donald Trump’s State of the Union in 2019, was considered as Joe Biden’s running mate and started a constellation of influential advocacy groups. And she’s grown her media platform with lucrative book and movie projects and a national tour that just wrapped up. 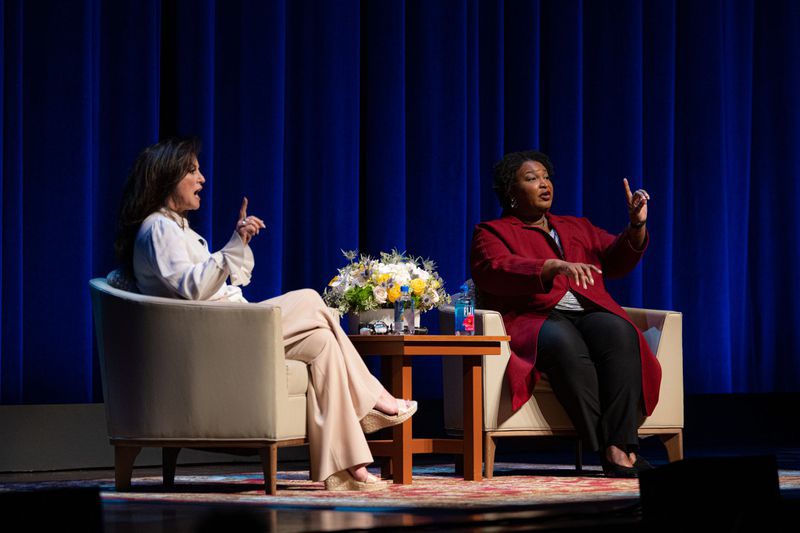 Stacey Abrams, with moderator Ursula Pari, raises a hand to quiet the crowd while talking about voting rights during a stop in San Antonio on her national tour earlier this year. Credit: John David Scarcliff

But she’s also maintained a foothold in state politics, pummeling Kemp for his approach to combating the coronavirus pandemic, his support for an overhaul of the state’s voting laws and his refusal to expand Medicaid. Her campaign launch video emphasized her Georgia focus.

“Regardless of the pandemic or the storms, the obstacles in our way or the forces determined to divide us, my job has been to just put my head down and keep working toward one Georgia,” she said. “Because in the end, we are one Georgia.”

The campaign, which filed paperwork Wednesday, will be led by her longtime aide Lauren Groh-Wargo. A major statewide launch is in the works for next year, but Abrams’ initial steps are expected to involve small-scale meetings with Georgians and fundraising events.

Abrams can count on a unified Democratic Party behind her candidacy. No other credible Democratic contender has entered the race, and her fundraising record and visibility allowed her to wait until December to announce. The timing gives her a full month to raise funds in 2021.

There’s no doubt that Abrams and her allies also aim to exploit ongoing feuding among Georgia Republicans, who have been engaged in a yearslong battle between various pro-Trump factions.

Trump and his loyalists have vowed to exact revenge on Kemp after he refused to overturn 2020 election results in Georgia, and the former president suggested at a September rally that he would have preferred if Abrams was governor.

Former U.S. Sen. David Perdue is seriously considering a primary challenge against Kemp with Trump’s support. He’s told donors and activists that he’s tempted to enter the race because he fears Kemp will get trounced by Abrams next year.

Several other Republicans have already launched campaigns premised on their loyalty to Trump, including former Democratic state Rep. Vernon Jones.

With her 2022 campaign, Abrams is hoping to harness a Democratic surge she helped engineer.

She and her allies spent most of the past decade mobilizing liberals with a campaign as an “unapologetic progressive” with vows to oppose abortion limits, support new gun restrictions and take other stances that many other statewide Democratic candidates avoided.

But she also embraced initiatives with more widespread public support, such as expanding the Medicaid program, a policy that Kemp and other Republican leaders have long opposed as too costly.

Her narrow 2018 defeat showed Democrats a new path to victory that relied on maximizing turnout among voters of color who often skipped midterm elections while also appealing to suburban voters alienated by Trump.

The victories were particularly sweet for Abrams, who passed on her own bid for the U.S. Senate and helped recruit Warnock to run instead. Back then, she said “Georgia will always be at the center of my plans” even as she was coy about her next step.

Still, there was little mystery among her closest friends about whether she’d mount another run for governor. She’s long been drawn toward executive office and often acknowledges that she wants to eventually run for president.

Stacey Abrams bumps elbows with Raphael Warnock during his campaign last year for the U.S. Senate. Abrams passed up her own opportunity to run for the seat and recruited Warnock as a candidate. (Drew Angerer/Getty Images/TNS)

An aide said that if she’s elected governor she will serve the full four-year term in office, adding that the buzz about a potential 2024 White House bid is “the talk of folks who don’t know her desire to lead Georgia.”

Her ambitions will also be used against her. Kemp and other Republicans have derided Abrams as a “celebrity” candidate with little long-term interest in Georgia. And Republicans have tried to blame her for Major League Baseball’s decision to yank the All-Star game from Atlanta, though she discouraged boycotts over the new voting law.

“Over the past four years, Gov. Kemp has exhibited courageous leadership for Georgians and guided his state through a turbulent time,” said Maddie Anderson of the Republican Governors Association. “Stacey Abrams spent her time touring the country in search of fame and fortune.”

She’s also been accused of hypocrisy for assailing Trump when he didn’t concede to Biden while she issued a nonconcession speech that criticized the “systemic disenfranchisement, disinvestment and incompetence” of Georgia’s election system under Kemp’s watch. Kemp has denied any wrongdoing when he was secretary of state.

Unlike Trump, Abrams never tried to reverse her election defeat and instead filed litigation seeking to expand access to the ballot. The Democrat also acknowledged that Kemp had won the election and that she was not the governor.

She settled another issue that dogged her during the 2018 campaign. Abrams paid off the roughly $54,000 she owed to the Internal Revenue Service, along with other credit card and student loan debt she reported during her first election run.

This campaign, Abrams would also be supported by the powerful Fair Fight political organization that she launched even as she ended her 2018 campaign.

The group has grown into a fundraising behemoth, collecting more than $100 million since its inception, and it has blitzed the airwaves with criticism of Kemp. It has become such a formidable force that Loeffler recently started her own group, Greater Georgia, to counteract its influence.

Gov. Brian Kemp, shown campaigning in 2018, responded to Democrat Stacey Abrams’ announcement that she will run next year for governor by saying her “far-left agenda” does not reflect the values of Georgians. “Next November’s election for governor is a battle for the soul of our state,” he said. “I’m in the fight against Stacey Abrams, the failed Biden agenda and their woke allies to keep Georgia the… Credit: Ryon Horne, The Atlanta Journal-Constitution

Many Republicans have eagerly expected Abrams’ entry, and some were running against her long before she announced. Candidates for obscure political offices have targeted her, and a group called Stop Stacey stocked with Kemp campaign strategists aims to keep her in front of a GOP battering ram.

No one, of course, mentions Abrams as often as Kemp, who essentially never stopped campaigning against her. He said Wednesday that every political step she takes is calculated “in service to her ultimate ambition of becoming president of the United States.”

Stephen Lawson, a veteran Republican strategist, is among the political foes who have long awaited her announcement. He said she offers the divided state GOP a common adversary.

“Never underestimate the unifying power Stacey Abrams can bring to Republicans in Georgia.”

I’m running for Governor because opportunity in our state shouldn’t be determined by zip code, background or access to power. #gapol