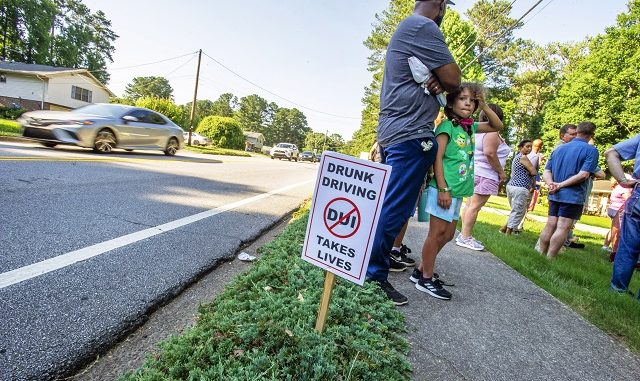 People attend a June 17 candlelight vigil in memory of Kuldip Kaur who died from her injuries after being struck by a vehicle in the 1800 block of Brockett Road on June 10. Photo by Dean Hesse.

Mayor Frank Auman said Brockett Road, the site of a fatal pedestrian crash on June 10, will soon see a list of improvements including repainting broader lines on the road, installing speed detection devices, conducting traffic-calming analysis and filling in sidewalks on the east side.

“Other items we will work into our priorities. Some of them take longer term funding, some require studies before we execute them …,” said Auman.

Auman said the data is crucial for future decisions.

“Do they slow the speed over a period of weeks or months? Do they have any effect at all? How many, how much, how big is the problem? We’re talking about spending some pretty significant money studying these roads … this will help us make the right kinds of improvements,” said Auman.

The project speaks to how well the city of Tucker has worked with many partners, said McHenry, including Georgia Department of Transportation, Branch Properties and Tucker Summit CID. City council members authorized the IGA unanimously.

City Council unanimously approved a $904,425 contract to repave Rosser Road from Hugh Howell to Spencers Point. Hildebrandt said the work requires digging up and reinstalling the road base, as well as reinstalling a granite curb as necessary between Hugh Howell Road and Rosser Place. Southeastern Engineering Inc (SEI) will provide daily inspections and oversight, costing an additional $37,000. The city expects to be finished in November.

Plans continue at Fitzgerald Field to attract major tournaments and high-level league play to bring “positive economic benefits including visitors to the city patronizing local hotels, community shops and restaurants” according to city staff. City Council approved a $64,200 contract for Keck & Wood for the development of construction documents for a field, infrastructure, lighting, video/sound board, locker room and concession stand. Money for Fitzgerald Field was included in the FY22 budget.

On Church Street, the former site of Tucker-Reid H. Cofer Library and four surrounding homes are ready for demolition. City Council approved a contract for $97,000 for demolition and asbestos removal by Tristar America, LLC. Environmental studies showed asbestos found in floor tiles and window caulking. The scope of the project includes asbestos abatement, demolition, site grading and stabilization, according to a memo from the city. The property will be a passive park.