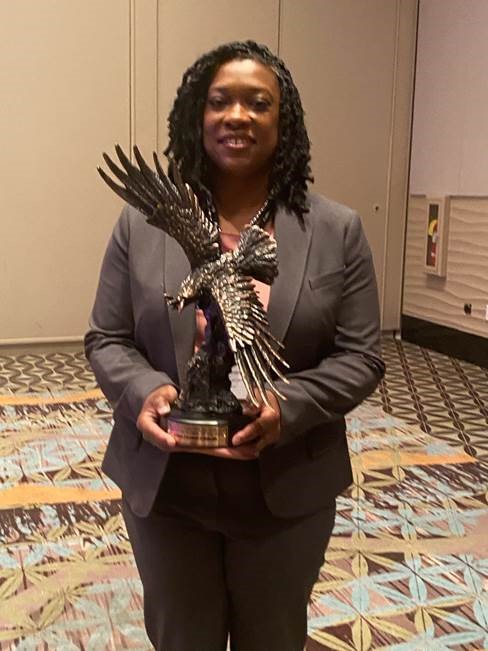 DeKalb County, GA, July 19, 2021 – DeKalb County Solicitor General Donna Coleman-Stribling was awarded the prestigious recognition of Solicitor General of the Year 2021 during the Prosecuting Attorneys’ Council Annual Conference on July 18, 2021 in Jekyll Island, GA. This peer-nominated award honors distinguished State of Georgia Solicitors General for their exceptional contributions to the prosecution profession. Solicitor General Coleman-Stribling was celebrated for her stellar service to her DeKalb County community, her demonstrated commitment to advocacy for victims, and her unyielding commitment to justice for those she serves.

Solicitor General Coleman-Stribling is known for her exemplary leadership and has gained the respect of her staff, colleagues, and professional peers because of her efforts and thoughtfulness toward building a safer community.

Solicitor General Coleman-Stribling leads one of the largest prosecutorial offices in the southeastern region of the country where, under her leadership, the office of Solicitor General advances diversion programs designed to provide second chances and improve participants’ life choices. In an effort to build coalitions with the local community, her office partners with leading anti-violence focused community-based organizations which serve women, men, and youth. With these partners she has been able to implement critical initiatives to protect the health and welfare of individuals during the global pandemic.

Among her most notable accomplishments is the Not In My DeKalb initiative. Coleman-Stribling became the first Solicitor General in the State to add victim advocates to the police precincts to provide secondary resources for victims and also be a resource for law enforcement. Since 2019 she has added an advocate in two precincts. These advocates help domestic violence victims with resources and guides them through court proceedings.

Coleman-Stribling is a pillar in the community and continually recognizes other leaders through her annual Dancing with the DeKalb Stars gala with proceeds that benefit the International Women’s House and the Women’s Resource Center to End Domestic Violence. The Solicitor General’s tireless commitment to domestic violence awareness is among her office’s many outreach campaigns to continue engagement efforts with the DeKalb community.

A career prosecutor, Solicitor General Coleman-Stribling has dedicated her life to service and zealous advocacy for those who seek justice. The distinguished 2021 Solicitor General of the Year Award honor commends her for this unshakable dedication to the citizens of DeKalb County and the state of Georgia.

For more information on the Office of the DeKalb County Solicitor-General, please visit our site at www.DeKalbSolicitorGeneral.com

About The Office of the DeKalb County Solicitor-General
The Office of the DeKalb County Solicitor-General, led by Donna Coleman-Stribling, prosecutes criminal misdemeanor offenses filed in the State Court of DeKalb County. These crimes generally include domestic violence, elder abuse, cruelty to children, vehicular homicide, drunk driving, stalking and harassment, trespassing, and animal cruelty. The Solicitor General’s Office handles more than 13,000 cases annually and consists of a staff of attorneys, investigators, victim-witness advocates, community prosecutor, legal secretaries, and a communications director. The Office prides itself on the professional and impartial prosecution of crimes while working closely with police and members of the community to develop strategies to prevent crimes before they occur. Stay informed by following us on Facebook and Twitter.