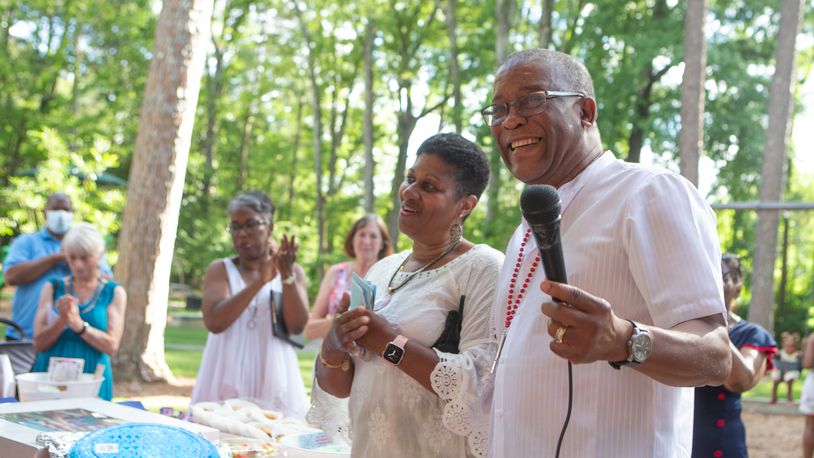 Avondale Estates postal clerk Russel Lewis (right) finishes speaking during his retirement party as his wife Cynthia Lewis (left) applauds. The Avondale community threw the gathering in honor of Lewis who served at the Avondale post office for 24 years. CHRISTINA MATACOTTA FOR THE ATLANTA JOURNAL-CONSTITUTION.

After 24 years the Trinidad transplant is retiring, and taking his beautiful accent with him.

That’s the cheerful voice that once greeted Mary Galpin when she stepped into the Avondale Estates post office.

The ”young” part is “a bit of a stretch,” she said, “since I’m 74 years old,” but she enjoyed the fiction. “I always left the post office feeling that I had met an angel.”

The jovial greeting — delivered with a lilting island accent — was the regular salutation from postal clerk Russel Lewis, who has been weighing packages and handing out sheets of stamps at the little post office since 1997. 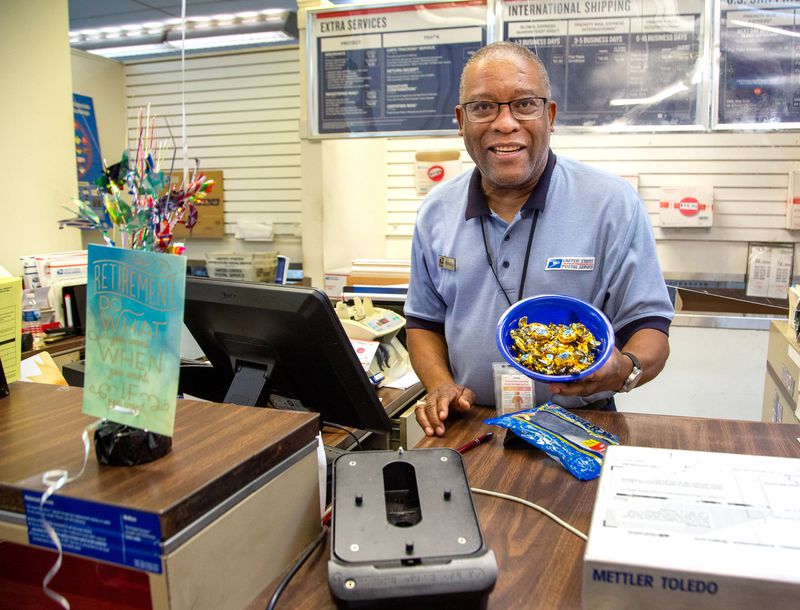 Postal clerk Russel Lewis holds a bowl full of spicy ginger candy that he kept on the counter for his customers at the Avondale Estates post office. Lewis has just retired after 24 years on the job. STEVE SCHAEFER FOR THE ATLANTA JOURNAL-CONSTITUTION

In his quarter century at the job, Lewis has attracted the kind of fan club that’s unusual for a government employee. “Most do not enjoy going to the post office — but Russel actually makes it a pleasant experience,” said customer Angie Graves. “You come out feeling better than when you went in.”

But all good things must come to an end. Lewis is retiring. On Wednesday, Lewis was toasted by a crowd of more than 100 Avondale residents as he celebrated his last day at work.

At a big outdoor party under Avondale Estates’ Willis Park pavilion, they brought an American flag cake, cookies, brownies and lemonade. They hung balloons and created a banner and an oversized “Forever in Our Hearts” stamp, with Lewis’ photo in the middle. A choir of enthusiastic non-professionals sang the Marvelettes’ “Please Mr. Postman,” with 13-year-old Ben Sears on electric guitar.

There were speeches and tears and reminiscences.

We learned that Lewis made a point of remembering the names of his customers and their children and where they were going to school.

He knew Marci Partin’s sister and mother were both postmasters back in Arkansas; that Joe Riley was a Clemson fan; that Karen Horace’s daughter was at Georgia Tech.

“Now how did he remember that?” Karen Horace asked, as she introduced Lewis to the Willis Park crowd. “Just remember,” she told the group, in a mock warning, “that Russel knows something about every one of you.”

“It has been a joyride,” said Lewis, a tall, 66-year-old Trinidad transplant, who came to the party in a crisp, band-collar, white shirt instead of the familiar blue and white USPS knit shirt. He was accompanied by his wife Cynthia, their son Kyle, infant granddaughter Aniah and Aniah’s mother Arielle Wade. “I’ve met so many wonderful people.” 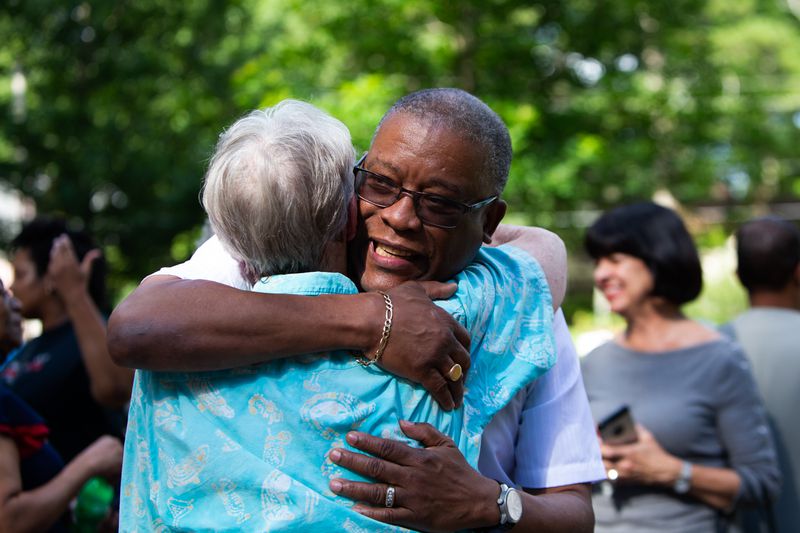 Avondale Estates postal clerk Russel Lewis (right) greets an Avondale Estates community member (left) during a retirement party for Lewis on Wednesday, June 30, 2021, at Willis Park in Avondale Estates, Georgia. The Avondale community threw the gathering in honor of Lewis who served at the Avondale post office for 25 years. CHRISTINA MATACOTTA FOR THE ATLANTA JOURNAL-CONSTITUTION.

His former postmaster Juanita Marbury, now retired, arrived to share a cupcake and some memories. “Russel has seen kids grow from their mothers’ stomachs to graduate from high school and go off to college,” she said. “He has seen a lot of their lives.”

“Russel is like the pastor,” said Jaccqueline Corzealious, Avondale’s current postmaster. “He’s seen it all. He prays for you, loves on you, cries for you, celebrates with everything that goes on in your life.”

Though Lewis became a trainer and taught other postal employees about customer service, he declined to take the test to become a postmaster.

Cynthia endorsed that decision. “For us it’s not just about the money, it’s about doing what you love to do.”

His fans had many Russel Lewis stories to share.

Horace said Lewis’ “ministry” was in being kind, and he sometimes extended that ministry beyond the walls of the post office.

On his lunch break he might help an elderly customer get something out of their attic or off a high shelf. “If they had a cabinet broken he would help them,” said Marbury. “If they needed something that required a ladder, he’d take his ladder over there.”

Avondale resident Laila Hudda mentioned that when her mother was ailing with Alzheimer’s disease she needed particular nutritional supplements that came through the mail. Hudda had ordered a resupply, but they didn’t arrive before her previous supply ran out. When the supplements came to the Avondale post office after hours, Lewis drove them to her house, and brought them inside: six dozen cans. “He didn’t have to do that,” said Hudda.

Carole Bruce Johnston (she’s been called “Bruce” since she was little) spoke of going through a difficult time when her husband of 10 years died in 2005. She was obliged to mail copies of the death certificate to various agencies, and as she stood in the post office one day, asking Lewis whether she should use registered mail or certified mail, she started crying. She couldn’t stop. 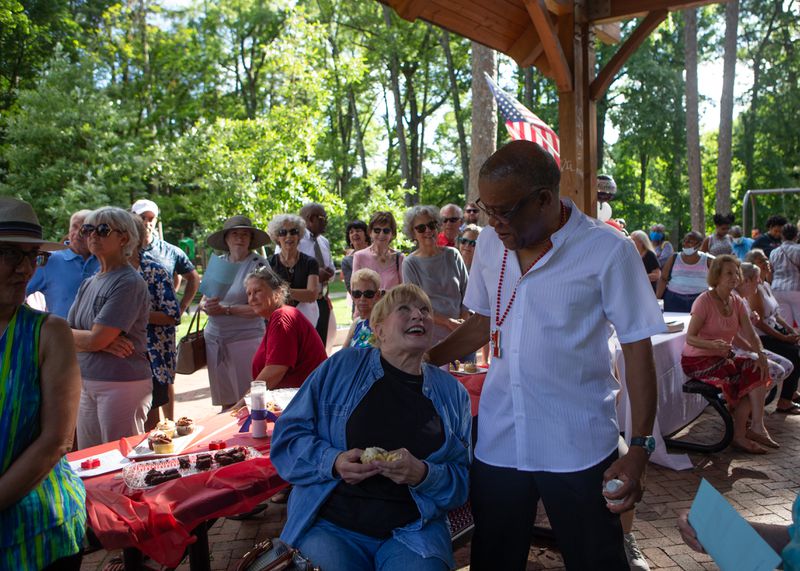 Avondale Estates postal clerk Russel Lewis (right) greets Bonnie Benedict (left) during a retirement party for Lewis on Wednesday, June 30, 2021, at Willis Park in Avondale Estates, Georgia. The Avondale community threw the gathering in honor of Lewis who served at the Avondale post office for 25 years. CHRISTINA MATACOTTA FOR THE ATLANTA JOURNAL-CONSTITUTION.

“I just stood there at the counter with my head down trying to get control of myself,” she said. Lewis spoke soft words of comfort to her and waited patiently as she wept. “I was feeling like I could have stood there for hours and he would have stayed there with me, trying to make me feel better.”

That moment made a permanent impression on Johnston.

“He has been a legend in Avondale Estates in an area where you don’t find too many legends,” said Jennifer DeWeese, who helped organize the celebration. His accent itself is refreshing, she said: “You get a little island feel, it’s like sitting on the beach with a cold drink in your hand and the sun on your face.”

In Trinidad they call this kind of get-together a “lime,” said Gerald Woolford, who also grew up in Trinidad, and has been friends with Russel since kindergarten. Woolford ended up moving to Atlanta after visiting Lewis here.

Some of these fans will probably experience “tabanka,” which Woolford said is Trinidad slang for sadness at being separated from a loved one.

“All these people being here, it’s really cool, it’s really touching,” said son Kyle Lewis, who said his father is happiest when he’s with granddaughter Aniah.

Lewis grew up in Laventille, Trinidad, and as a teenager moved with his parents and siblings to the rough Bedford-Stuyvesant neighborhood in Brooklyn.

(As a point of information, Russel’s mother spelled his first name with one “L” and he has stuck with that spelling. Everyone else generally spells it wrong. He doesn’t mind.)

His father worked as a clerk in a law firm and his mother worked in the jewelry department at Macy’s. His father “didn’t make a lot of money,” said Lewis. “There were seven of us, it was tough for them, but somehow they made it work.” 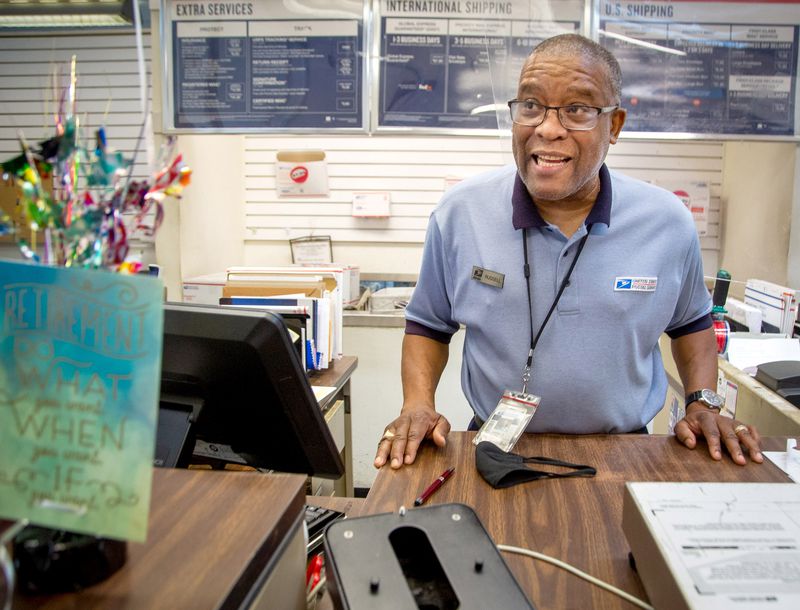 Russell lewis talks about his 25 years working at the Avondale post office Monday, June 28, 2020.STEVE SCHAEFER FOR THE ATLANTA JOURNAL-CONSTITUTION

He met Cynthia at Hunter College where he studied accounting and she studied education. After marriage, they wanted a greener place for their children to ride their bikes, and moved to Stone Mountain, where she had family.

For 13 years Lewis worked in finance, financing the big dollar premiums that corporations must pay for multimillion-dollar insurance policies, before switching to the post office.

Now he is looking forward to working in his garden, spending time with his granddaughter (Kyle and Aniah live in the house next door) and traveling. South Africa is on the itinerary.

And all those chores he did for his appreciative customers? “Now,” said his wife Cynthia, “he’ll be doing that for me!”

Despite pandemic, Georgia ends fiscal year with a record $3.2 billion jump in revenue