Proposal would split $32.6M in coronavirus aid among DeKalb cities 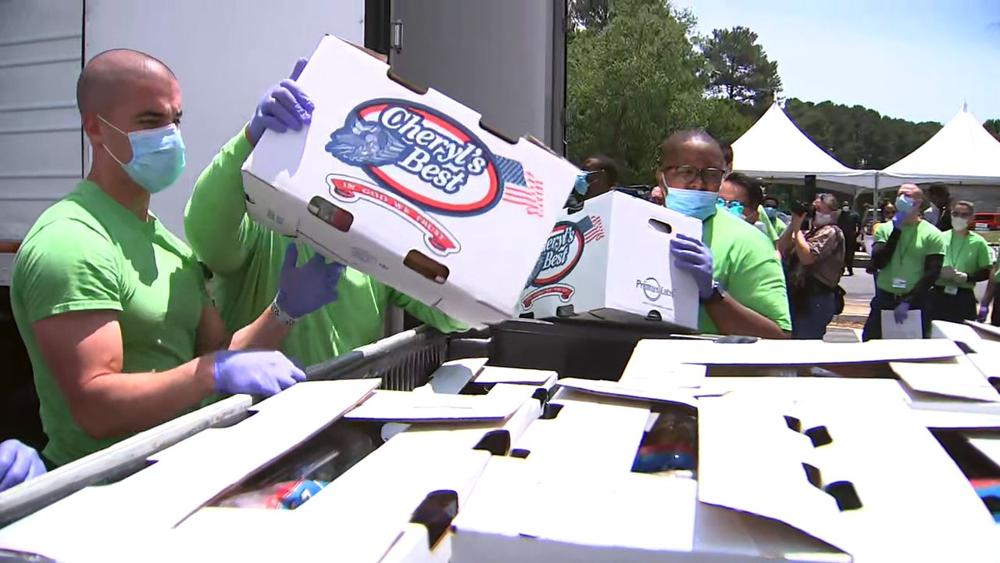 There are several food giveaways happening June 27 in metro Atlanta.

A new proposal would give DeKalb cities about $32.6 million of the federal coronavirus aid received by the county earlier this year.

The figure — which would be distributed to cities based on population — represents a little over one-fourth of the $125 million that DeKalb County received from the federal CARES Act in March.

DeKalb County CEO Michael Thurmond and the DeKalb Municipal Association reached agreement on the new proposal during a Monday afternoon meeting, their fourth in recent months. It must still be approved by the county’s Board of Commissioners.

There was some push back from members of that body when Thurmond presented the plan Tuesday morning. But the deal did not appear to be in immediate peril.

“The money should follow the virus,” Commissioner Mereda Davis Johnson said, taking issue with the idea of per capita distribution. “But I can live this if we’re shown how [cities] are going to prioritize the money.”

Under the CARES Act, five Georgia communities with populations of over 500,000 received direct allocations to help address costs associated with the coronavirus pandemic: the city of Atlanta and Cobb, DeKalb, Fulton and Gwinnett counties.

That left smaller jurisdictions — including cities within the above counties — scrambling to figure out if they’d get any help.

Georgia Gov. Brian Kemp finally issued guidance on the matter last week, laying out a formula for smaller communities to get a share of funding the state received. But the plan left out municipalities within Cobb, DeKalb, Fulton and Gwinnett, instead telling them to turn to their counties for assistance.

Discussions had already been taking place in DeKalb, but the governor’s guidance helped speed up the process in recent days.

Under the proposal agreed upon by Thurmond and local mayors, DeKalb would maintain about 40% of the money ($50.1 million) to continue countywide efforts related to the pandemic. Another 34% ($42.6 million) would stay with the county to cover costs in unincorporated areas.

The remaining $32.6 million or so would be split among the cities according to their population.

DeKalb’s largest cities, Brookhaven and Stonecrest, would both receive around $6.3 million. Tiny Pine Lake would get around $85,000.

Mayors said the funding — and simply knowing that they’re getting funding — is crucial for making important budgetary decisions on things like hazard pay for frontline workers and assistance for local small businesses.

And while negotiations have been tense at times, Monday’s meeting also brought a sense of camaraderie.

“I think it’s important that we understand that, regardless of how we split this money, we’re going to have to work together to make the best use of it over the next six months,” said DeKalb Municipal Association leader Bill Floyd.

Thurmond agreed. He said county-led efforts like new testing facilities and food distributions have helped all of DeKalb, and that won’t stop.

“We’re confronting an existential threat that’s no respecter of county or city limits,” the CEO said.

Several county commissioners, meanwhile, said they’d like to see plans for how cities would spend the money they’re allocated.

Commissioner Jeff Rader said it would help limit a duplication of efforts and make sure all needs are addressed. Commissioner Kathie Gannon said cities should be encouraged to work “with and around” county efforts.

Commissioner Larry Johnson, who represents a largely unincorporated swath of southwest DeKalb,  said his district has more uninsured people, more single-parent homes and more essential workers. When coronavirus hits there, he said, it has a far greater impact than in some other areas.

He said a per capita distribution doesn’t necessarily produce “fairness and equity.”

“I have to look at it in totality, I can’t look at it based on a formula,” Johnson said.

DeKalb health leader is president-elect of national health board