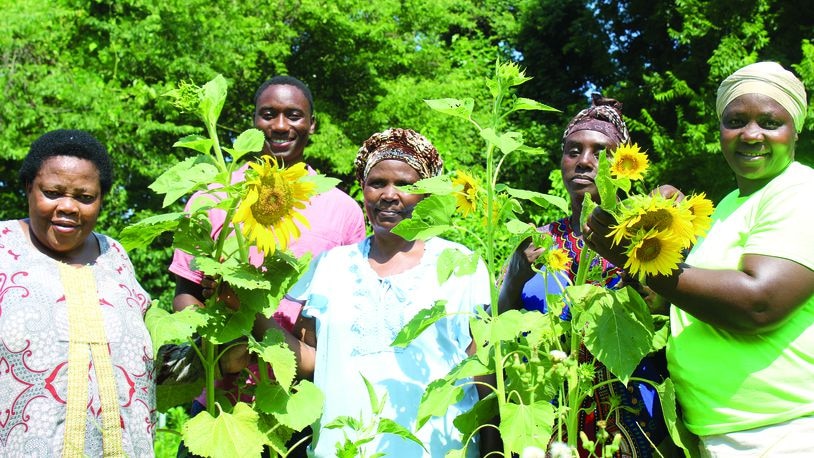 The Umurima farmers from Burundi are, from left, Halieth Hatungimana, Janne Nyibizi, Everine Nyandwi and Ana Marie Mukeshimana. Standing behind them is interpreter Joseph Minani. (Courtesy of Dyana Bagby)

The four women gathered around a tall bush in the middle of the small farm across the street from the Avondale MARTA station. Clusters of ripe blueberries were hidden beneath some leaves. They picked a few and popped the sweet fruit into their mouths.

“Oooh! Ooooh!” said one woman, chuckling, and filled her hands with as many blueberries they could hold. Her friends did the same, chatting excitedly with each other.

The women are from Burundi, a small East African country. Through an interpreter, they said they all learned as young girls how to farm. The food they grew was cooked for family meals. Farming was also a way to support their families.

“Farming in our country is the first thing we do … it is our first job,” Halieth Hatungimana, 63, said. “If we didn’t farm, we wouldn’t have food or clothes.”

“If you don’t farm, how do you put food in your belly?” said Everine Nyandwi, 57.

Ana Marie Mukeshimana, 48, said because girls couldn’t go to school in Burundi, they farmed instead.

The women moved to the U.S. in 2007 after they were forced to flee Burundi due to civil war and the genocide in neighboring Rwanda. When they resettled in Clarkston and Stone Mountain, they asked locals where they could grow their own food. That question led to the formation of the local nonprofit Global Growers Network Inc.

In late 2009, Global Growers found a piece of vacant land adjacent to the East Decatur Station commercial development near the Avondale MARTA station. The group made a deal with the property owner to pay $1 a month for the site to build a farm for the women, known as Umurima, to honor their Burundi heritage.

“The reason why that first property was so helpful for this group of farmers is they don’t drive,” said Robin Chanin, co-founder and executive director of Global Growers. “Having a farm on the MARTA line made farming possible.” 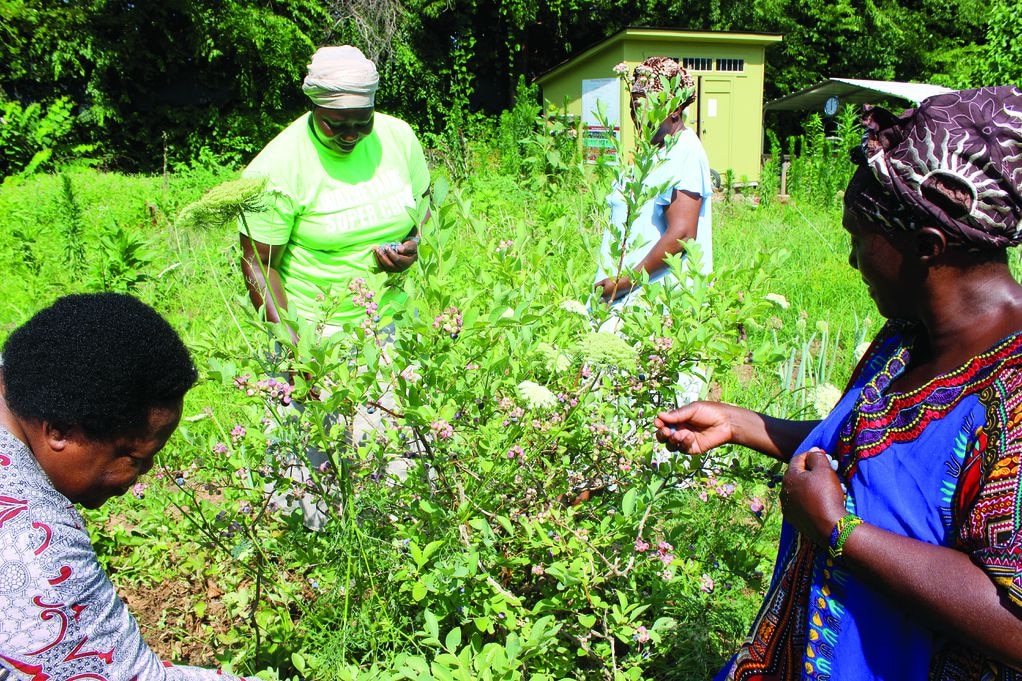 The farmers pick blueberries at the small farm where they’ve grown food for 12 years. (Courtesy of Dyana Bagby)

For the past 12 years, the Umurima have planted and harvested grains, onions, chard, kale, collard greens, peanuts, beans, and blueberries from the small plot of land. The women also grew favorites from their home country, such as cassava, a root vegetable like yuca, and muchicha, an amaranth green. They grew the food for their families and sold some to local markets.

During this time, Global Growers expanded to create a network of farms and gardens throughout metro Atlanta that are used by hundreds of international families new to America.

Last year, the owner of the farmland let the Umurima and Global Growers know that hundreds of apartments, a grocery store and other stores are going to be built around East Decatur Station. The Umurima are now harvesting the last crops to grow at the site.

“The farm was good,” Nyibizi said. “I feel we accomplished a lot here.”

The women did not want to stop farming, however, so Global Growers again went to work searching for land.

“One of the ways we’ve looked for land over the years is very old school, which is using Google Maps and just scanning green space,” said Robin Chanin, co-founder and executive director of Global Growers.

“I spent some time looking at the MARTA rail corridor, following it, and I am just looking for patches of green,” she said. “And at the end of the line at Indian Creek I said, ‘What’s that green space in the corner of the parking lot?’”

In June, MARTA announced it is partnering with Global Growers to establish a farm for the Umurima in that corner of the parking lot Chanin saw via Google Maps. The women will grow food for their families, and their produce will also be sold at MARTA Markets at West End, Bankhead, College Park, H.E. Holmes, Five Points, Doraville, and Kensington MARTA stations.

“When we heard about this farm being uprooted and that those who tend to it are MARTA riders, we knew we wanted to help,” said MARTA Interim General Manager and CEO Collie Greenwood in a written statement.

“Indian Creek Station is located in an area identified as food insecure by the USDA and this partnership with Global Growers Network will support these refugee families and food equity in the surrounding communities,” Greenwood said. 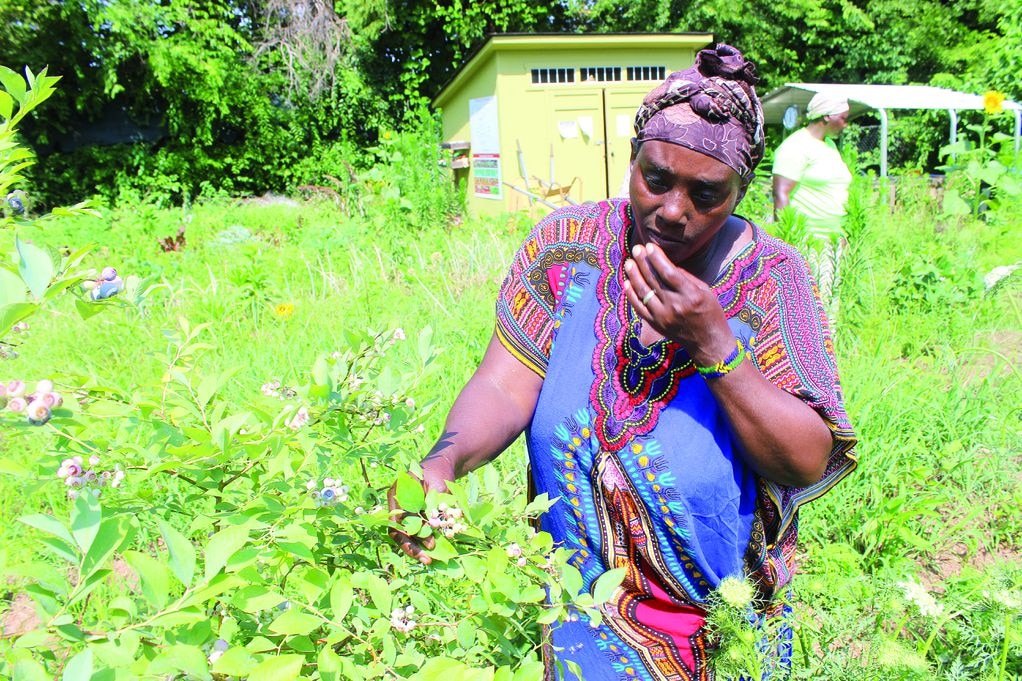 Chanin said Global Growers’ license agreement with MARTA, which is free like those issued for Soccer in the Streets, is planned to last five years. In July, MARTA’s board of directors issued a request for proposals for a transit-oriented development at Indian Creek. The board also selected a master planner for the project. The ideal plan would incorporate the farm into the new development, Chanin said, but that possibility is uncertain.

What is certain is Global Growers’ intention to continue connecting diverse farmers to land so they can grow food in sustainable ways, sell the food at markets to bring in income for their families, and increase consumption of culturally familiar foods, Chanin said.

Earlier this year, the organization acquired 23 acres in Conyers to serve as a “flagship” farm. Fifteen to 20 small farms are planned to operate on the land, all led by diverse growers, Chanin said.

“Global Growers is on a pathway to land ownership following 10 years of developing farms and gardens on leased land with our talented grower network, most of whom face current and historical barriers to land access,” she said.

“Together, we are creating a model of land stewardship that will drive community wealth building while also preserving and sharing important cultural traditions.”