OPINION: Flushed with pride that fix is in, finally, for DeKalb sewers

Let me start by not burying the lead of this column. DeKalb County residents will have to pay more for their water and sewer. It’s uncertain when. But it surely will happen.

The county has had a stinking mess on its hands — an aging, clogged, collapsing sewer system badly in need of replacement and repair.

DeKalb recently reupped its 2011 consent decree agreement with the US. Environmental Protection Agency to continue fixing its system and got $265 million in low-interest federal money and another $100 million from the state. But that’s just a drop in the bucket, if you’ll excuse the pun. DeKalb must pay back that money, then borrow more. And then probably even more again.

By its own reckoning, DeKalb has spent more than a billion dollars over the past decade to identify sewage overflows and make repairs to the water and sewer systems. And you know what? It probably will have to spend a billion more. At least.

“This is expensive; this is real money,” said DeKalb CEO Michael Thurmond, a master politician and also master of the obvious. “If you don’t have infrastructure, you have nothing.”

It is Government 101: Protect the citizenry and allow them to flush their toilets. 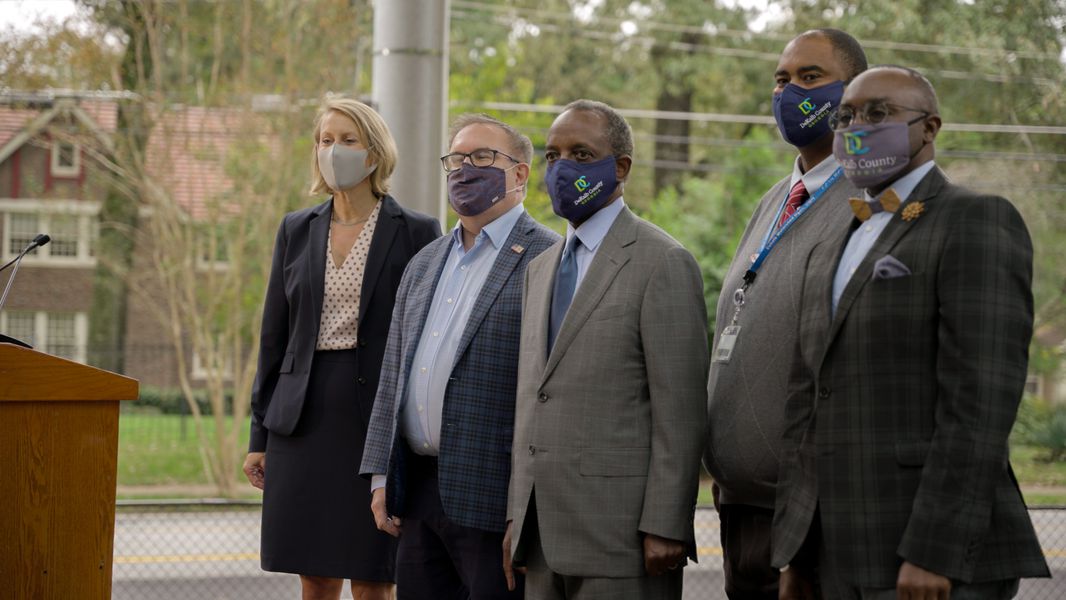 Thurmond said that 59 miles of new sewer trunk line (the big ’uns) will be installed in the county, including 41 miles in southwest DeKalb, where the most and the worst sewer spills occur. So much of the work must be done there partly because it has some of the oldest and most deteriorating lines.

“The other part of it is race,” Thurmond said. “You don’t make significant investments in lower-income minority communities. They were complaining but their voices were not being heard.”

“I get why people are frustrated,” he added. “You don’t have any easy answer. (The fixes) are expensive and time consuming.”

It’s good news that DeKalb is — finally — getting on with it. Thurmond likes to say the work has accelerated since 2017. By the way, that is when he came to office. He says $800 million in repairs have happened since then, compared to just $300 million before. Part of that is a new leader recognizing this had to be done. And part of it is a government that has slowly pulled itself out of a morass of its own making.

In 2013, the courts released a grand jury investigation into corruption in DeKalb. It found evidence of endemic “incompetence, patronage, fraud and cronyism” in the government. The digging started when a DeKalb grease-trap inspector got caught taking bribes from restaurants.

Then-District Attorney Robert James initially focused his investigation on work connected to the $1.35 billion in capital improvement projects with the sewers. When you have that kind of money around, he figured, funny stuff happens.

Water and sewer upgrades are planned across DeKalb County, including at the Snapfinger Creek Advanced Wastewater Treatment Facility in Decatur. HYOSUB SHIN / HSHIN@AJC.COM

After the grand jury report came out, I was assigned to look into the findings. I decided to start by examining the first major contract awarded in this enterprise. It was $7.7 million to an engineering firm for work at the new Snapfinger Creek Wastewater Plant in south DeKalb. But the hiring of the small, obscure firm raised several questions. When AJC reporter April Hunt and I raised some of those questions to county officials, they let the firm go. And then the county had to rebuild a retaining wall because of shoddy work.

It went on like that. Stuff was screwed up from the start. Literally.

The investigation ended with the prosecution, conviction and imprisonment of then-CEO Burrell Ellis on tangential charges. The higher courts later overturned his case.

But over the years, three more of the seven county commissioners were indicted on various corruption charges, and DeKalb couldn’t get out of its own way. The sewer revitalization project languished. During this time, the county burned through $80 million in interest on the money borrowed for the projects.

In 2015, DeKalb’s interim CEO Lee May hired Scott Towler to oversee the sewer project. In interviews with those who worked with Towler, I was told he was a hard-charging, square manager who started getting the county focused on the job.

However, Towler ran into trouble with higher-ups when he started complaining that businesses were hooked up to DeKalb’s system, even though there wasn’t the sewer capacity for it. This was a touchy subject because no government entity wants to have its hands tied when bringing in development.

A year later, Towler was gone, leaving behind a letter blasting the county for, he said, making him bend the rules. Thurmond’s office called him a “disgruntled ex-employee” who was double-dipping with his car allowance.

He later settled a whistleblower lawsuit for $40,000.

Commissioner Nancy Jester, who jumped headlong into the sewer issue after coming on the board in 2015, said: “Scott Towler was crucial in changing the course in making DeKalb compliant. He was the necessary manager. Anyone who says otherwise is not clear on what happened. He ran up against politics.”

Now, DeKalb is barreling forward, again, with a plan to fix its sewers even though critics like Jacqueline Echols, head of the South River Watershed Alliance, said the county has dragged its feet in trying to forthrightly face the issue. Her organization last year filed suit in federal court, saying the county was not doing enough to prevent spills. Her org said DeKalb was not being held responsible when it spills.

He added that no rate increase is in the offing for the near future. The county had several increases a decade ago. But commissioners say a hike is inevitable.

Zack Buersmeyer, a Tucker resident, has complained for years about sewer spills on his property and has used urinal cakes outside to help quell the smell. His property, next to South Fork Peachtree Creek, was on a 2017 list for sewer repairs. He said the county has three times in the past decade brought bulldozers to his property and taken down trees to allow work to be done on a sewer line behind his home. They’ve also been there many other times for minor repairs. Crews were out there again Tuesday.

“There’s been so many changes with personnel; it seems like they start from scratch every three years,” he said. “But it’s just been a Band-Aid. I’d like to see it future-proofed so they don’t have to come back.”

Not to worry, CEO Thurmond swears it’s a new day in DeKalb.