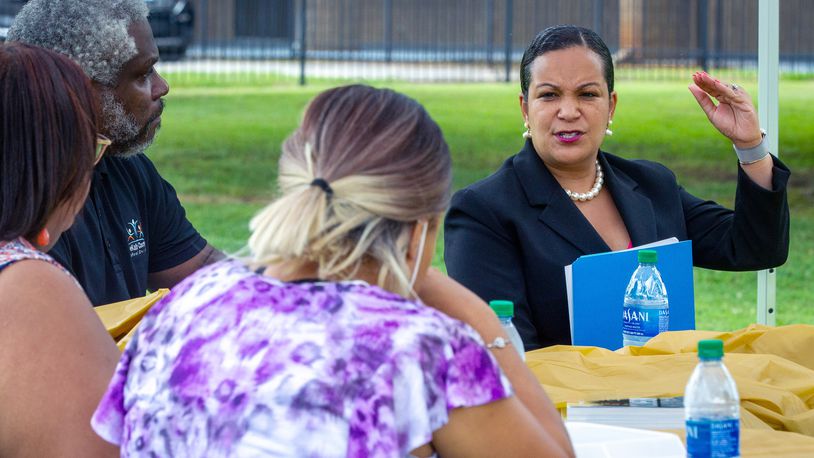 DeKalb County Public Schools Superintendent Cheryl Watson-Harris offered assurances the district was at the ready to reopen this week. (Steve Schaefer for The Atlanta Journal-Constitution)

District did surveillance testing last week, but results were delayed

The COVID-19 pandemic has forced new roles and responsibilities on school districts. They aren’t doing well at some of them. Testing staff for the fast-spreading omicron variant is especially challenging, as DeKalb County Public Schools recently discovered.

The district rolled out surveillance PCR testing last week. But teachers and staff were still waiting for results days later, negating the value of the tests since they could have become infected in the days following.

One teacher sent me a copy of her negative test. The only problem was she never took a test at the district. She had signed up with the district but chose to get tested elsewhere.

I asked DeKalb staffers to share their experiences. Here are three comments I received this week on the delayed testing results:

1. “I still haven’t received my results from last Tuesday.”

2. “I took the test first thing Monday morning at DeKalb BOE office and still haven’t gotten my results back. I got a text this afternoon saying they were still processing my results. It’s been over 7 days at this point. I went to Viral Solutions midweek and got my results in 24 hours.”

3. “Who is the county using for testing and why was supply chain an issue? Was there not a lab close by that they could use? How are they allowing students to come back to class before the teachers know their status?”

I asked the district about the complaints and was told Our Community HealthCare System was hired to conduct PCR COVID-19 testing for staff last week. Results usually take 24-48 hours.

A district spokeswoman said: “Due to the unprecedented increase in demand for testing, along with the general holiday supply chain strain, COVID-19 lab reports are returning much later than anticipated. OCHS had a medical doctor and nurses on-site at our facility to provide medical consultation, PCR testing, and rapid testing to any staff who reportedly was not feeling well.”

She also said: “All staff who took advantage of PCR testing at our facility have been notified of their results. OCHS will provide rapid testing at the district’s office this week.”

When I told her that some DeKalb employees said they had not received their results, she said, “Our Community HealthCare System is currently verifying and fact checking with the labs.”

In fact, some employees who tested last week received follow-up emails that they could sign up now for rapid tests, although appointments were already backed up to the end of this week.

Several school district employees said the testing glitch was part of a series of snafus they were seeing despite Superintendent Cheryl Watson-Harris’ assurances the district was at the ready to reopen this week.

In a note to parents Monday, Watson-Harris said, “To ensure the safety and well-being of our students and staff, we will continue to consistently clean and sanitize our facilities while strictly adhering to the guidance issued by the Centers for Disease Control and Prevention. By properly wearing masks and following mitigation strategies, our students can receive the instruction they need to learn, thrive, and reach their fullest potential.”