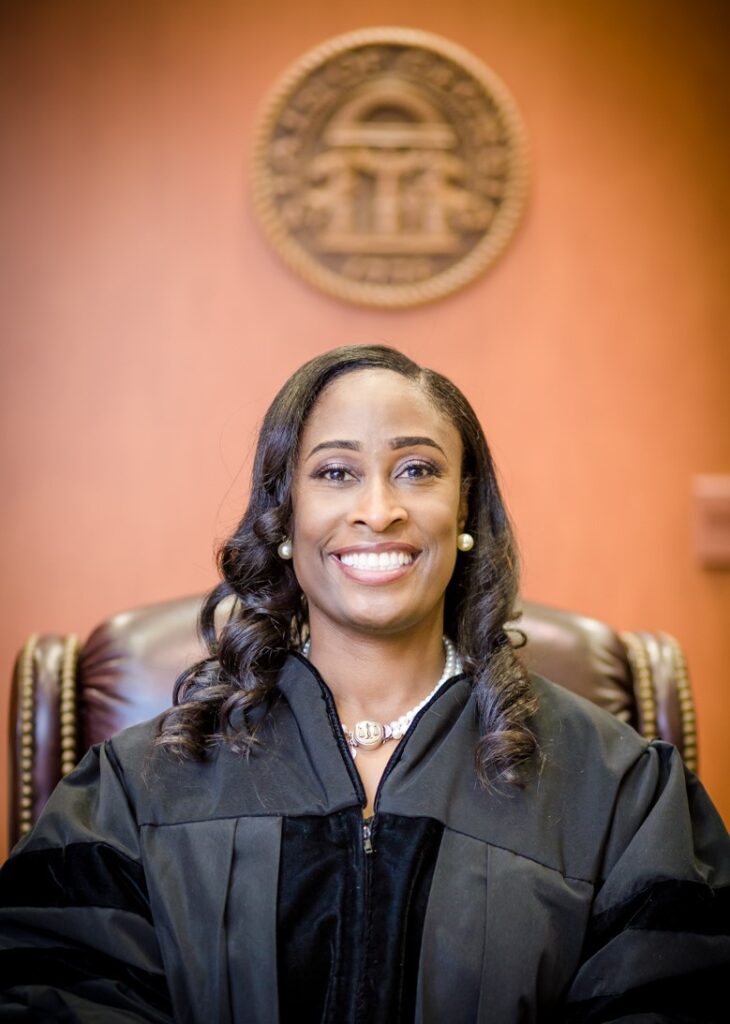 The Honorable LaTisha Dear Jackson was elected Superior Judge of the Stone Mountain Judicial Circuit in July of 2018.
As a Superior Court Judge, she presides over a trial court of general jurisdiction for both civil and criminal actions with exclusive
equity jurisdiction over all cases of divorce, title to land, and felonies. Judge Dear Jackson serves as a presiding judge over
the Circuit’s Drug Court Track 1 Accountability Court and after a year of service, Judge Dear Jackson was unanimously elected to
serve as the Presiding Judge for all the Circuit’s Accountability Courts. In December 2022, Judge Dear Jackson was elected to
serve as the Chief Judge of the Stone Mountain Judicial Circuit as well as the Administrative Judge for the Fourth Judicial
Administrative District which is comprised of DeKalb and Rockdale Circuits.

Throughout her legal career, Judge Dear Jackson has worked as a Senior Associate with the law firm Thomas Kennedy Sampson
& Tompkins, LLP , a solo practitioner and a DeKalb County Assistant Solicitor-General. Her prior judicial experience includes
serving as a full-time DeKalb County Recorder’s Court Judge. Judge Dear Jackson also served as a Municipal Court Judge in both
the cities of Stone Mountain and Lithonia where she twice made history by becoming both the first female and youngest judge
to serve in Stone Mountain and the first female Chief Municipal Court Judge in Lithonia.

Judge Dear Jackson earned her Juris Doctorate from Georgia State University College of Law and her undergraduate degree
from the prestigious Spelman College and is currently pursuing two separate certifications from the National Judicial College.
A native of Los Angeles, California, Judge Dear Jackson is active in numerous professional organizations. She is a member of
Georgia Association of Black Women Attorneys, Georgia Association of Women Lawyers, DeKalb Bar Association, Gate City
Bar and DeKalb Lawyers Association where she served an unprecedented two-year term as President. She is the immediate
past chair of the State Bar of Georgia’s Judicial Section, a past president of the Georgia Council of Municipal Court Judges and a
current member of the State’s Judicial Council.

In her community, Judge Dear Jackson has served on the Board of Directors for the Georgia Center for Children and currently
serves as a Board of Director for both Leadership DeKalb and the DeKalb County Advisory Board for Boys and Girls Club Metro
Atlanta. She is a twenty-five-year active member of Alpha Kappa Alpha Sorority, Inc. and received numerous awards for her
contributions to the legal and civic communities.

DeKalb County Voter Registration and Elections Board to Meet Jan. 27