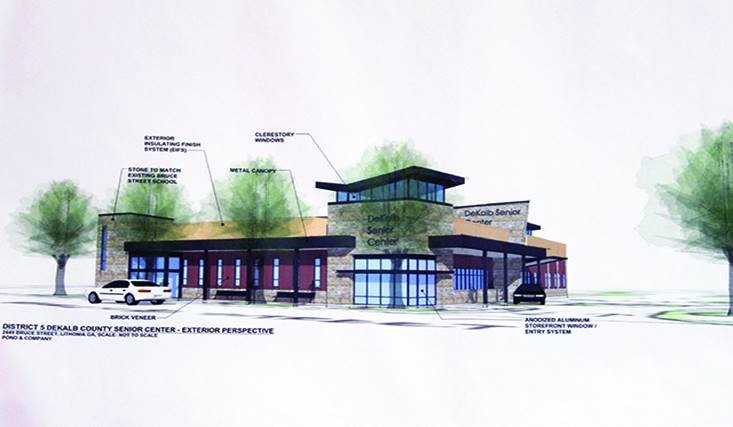 The East DeKalb Community and Senior Center on Bruce Street in Lithonia will have a new building in 2021.

DeKalb County approved funding to build a new facility to replace the current senior center building at 2449 Bruce Street. The new 16,000-square-foot facility will feature a multipurpose room and dining hall with stage, classrooms, an aerobics studio and a game room.

“But [county officials] thought that would cost more than what it was really worth, and it would be better to build a new facility,” Jackson said. “I was interested in keeping the facility in the city, so we were able to sell them the land that it’s going to be built on and that’s where it contains the ruse of the old Bruce Street School, which was the first public school for Black children in DeKalb County.”

Jackson said the county won’t demolish the historic Bruce Street building and there are separate discussions on what can be done to restore the building.

“Unfortunately, right now [the building] is overgrown, so it needs to be cleaned out and made into a useable space,” Jackson said. “We have to have some discussions with the state’s preservation organization as to what some options might be.”

The site for the new senior center is approximately 4.5 acres and will include about 100 parking spaces. County officials said commissioner Mereda Davis Johnson is leading the project and construction is anticipated to be completed in the first quarter of 2021.

Jackson said she is hoping they will be able to break ground for the project before the end of the year.

Read the full story on TheChampionNewspaper.com.

Fall 2019 elections: Here’s who will be on the ballot in DeKalb County