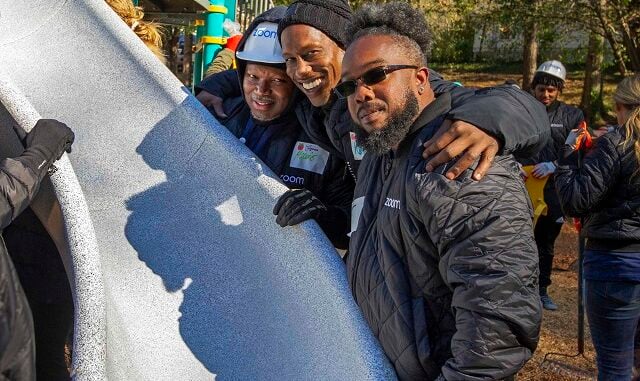 Zoom volunteers pose for a photo after putting a slide in place at McCurdy Park in the city of Stone Mountain on Thursday, Nov. 17, 2022. The new kid-designed playspace replaces a playground destroyed by an arson fire in 2016. The build was a partnership between the city, KABOOM! and Zoom. Photo by Dean Hesse.

More than 100 volunteers descended on McCurdy Park in the city of Stone Mountain on Thursday, Nov. 17 to help build a new kid-designed playspace.

The playspace is a partnership between the city, KABOOM! and Zoom. It replaces a playground destroyed by an arson fire in 2016.

“We’re just so happy,” said Stone Mountain Mayor Beverly Jones. “It was a tragedy that happened to our city, but now it’s a blessing. Now we have a new and better park here and I am just so excited that our children will have a place to come and play, a place to be social with other people and the parents will have a place to come out and just get some relaxation. Not only that, but it improves our community.”

Jones said the city filled out a grant application with KABOOM!, a national non-profit with a mission to end playspace inequity.

“We were fortunate enough to have a park that was in dire need to have a playground, so we met the criteria,” said Jones who acknowledged the diligence of City Councilmembers Gil Freeman and Chakira Johnson and City Clerk Shawntez Edmondson to make the project happen. She also praised the city’s public works department.

“They have done numerous, numerous jobs. They have worked diligently day and night to get this completed and they did it in a joyful spirit,” Jones said.

Melanie Barnes, associate director of playspace design, innovation and construction for KABOOM! said volunteers from Zoom and the local community worked side by side to plant shrubs and trees, move safety surfacing to the playground footprint and mix concrete.

“Too often the color of a child’s skin or the zip code in which they live determines their access to safe playspace, and we’re really working to end that inequity, so all kids have access to a safe place where they can have a childhood that they deserve,” said Barnes.

The build was sponsored by video conferencing company Zoom, who provided majority funding and 75 volunteers from across the state, according to Nicole Gray, product program manager for social impact team Zoom Cares.

“We are always believing in giving back to the community. That’s really what we do,” said Gray. “We reached out to KABOOM! We immediately thought what could we do with kids and we talked about having a playground and fortunately enough we were picked to not only do a playground, but also do a playground here in Stone Mountain, Georgia. We’re excited to spread some love back to this community.”

McCurdy Park is one of four city of Stone Mountain Parks and is located at 5190 W. Mountain Street. (The new playspace is located on the Poplar Springs Road side of the park.)

Playground equipment is assembled for a new playspace at McCurdy Park in the city of Stone Mountain on Thursday, Nov. 17, 2022. The kid-designed playspace build was a partnership between the city, KABOOM! and Zoom. Photo by Dean Hesse.

Over 100 volunteers came out to help build a new kid-designed playspace at McCurdy Park in the city of Stone Mountain on Thursday, Nov. 17, 2022. The build was a partnership between the city, KABOOM! and Zoom. Photo by Dean Hesse.

For more photos and to read the original story on TuckerObserver.com.

How to gather safely for the holidays and protect vulnerable relatives