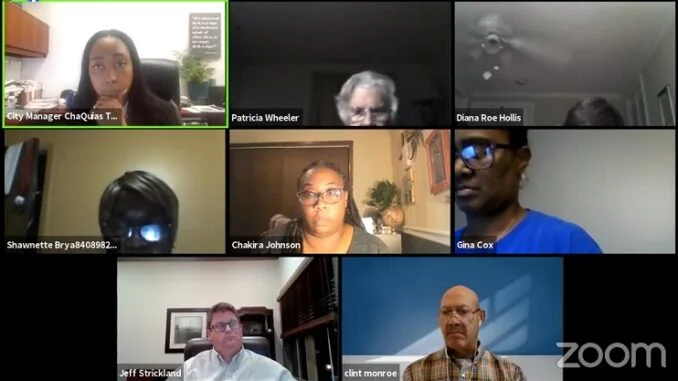 Two streets in downtown Stone Mountain will be closed over several days this fall for a new live action film production.

Several new business items were introduced at the city council’s work session. The city is considering a contract with Southern Sky Fireworks for a show during the 2021 Christmas Parade on Dec. 4. The five-to-seven-minute show will include approximately 1,200 shots and cost $4,300.

A sidewalk project on East Mountain Street will cost the city $13,000 more than originally expected. The city entered into an agreement with the Stone Mountain Memorial Association for construction of the sidewalk in 2019. The city’s half of the payment for the project was expected to be $40,000.

And the city is planning to put 16 wooden picnic tables up for sale. The tables were removed from the city’s parks and replaced with new ones.

The city council will address these new business items at its October meeting.

In other news from Tuesday’s meeting, the Department of Public Works had a survey done to install an 18-spot gravel parking lot behind City Hall. The construction estimate is $42,000, according to Public Works director Jim Tavenner.

“When the court gets back up and running, it will give us additional places for people to park over there,” he said.

The city will hold a scarecrow contest on Main Street from Oct. 8-15. The $25 entry fee is due Sept. 30. Applications for the contest are available at City Hall and the train depot. The winner will be announced during the Trunk or Treat event on Oct. 26.

The city and Oasis Healthcare will host a virtual COVID-19 education session for city officials and staff on Sept. 28 at 1 p.m. The event is intended to boost the vaccination rate among city employees. Less than one-third of Stone Mountain employees were vaccinated against COVID-19 as of Sept. 7.

“We’re looking forward to having that session, so particularly our staff can get more information about the COVID vaccine,” said city manager ChaQuias Miller-Thornton.

Details for accessing the virtual event will be available soon.

The city council also held a public hearing on the city’s 2021 Comprehensive Plan. It’s the second of two public hearings that the Georgia Department of Community Affairs requires to move the process forward.

Andrew Smith, a principal planner with the Atlanta Regional Commission, presented the details of the latest draft of the Comprehensive Plan. The plan will now move on to DCA for a state-level review before returning to the local level for approval.