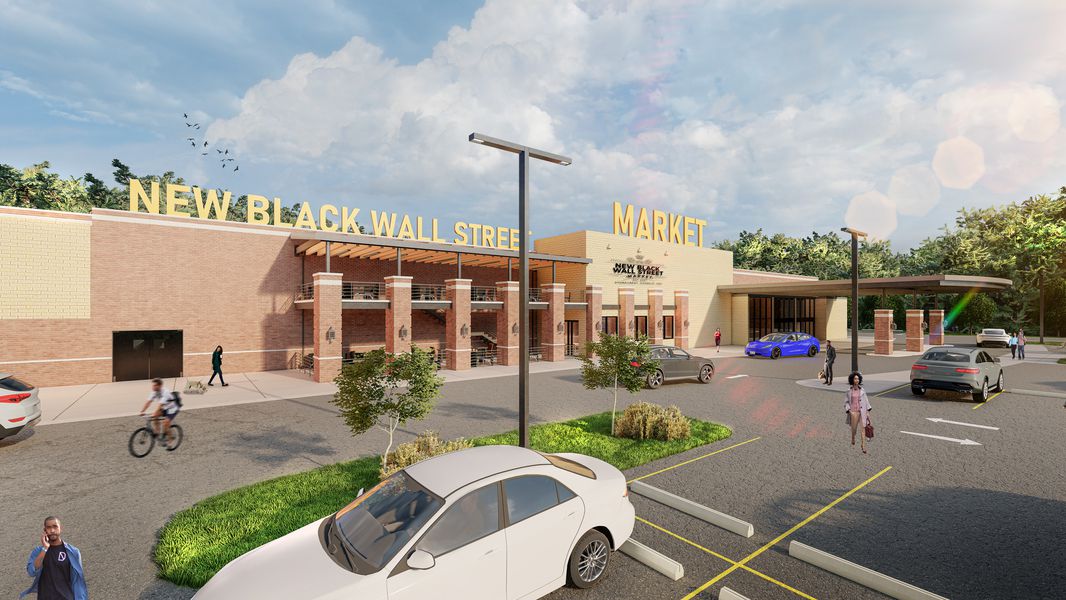 This is a rendering of the New Black Wall Street Market, which is slated for a soft opening at the end of May 2021.

Stonecrest leaders have promised to make the city a hotbed for business, with mixed results since the city’s inception in 2017. With past falters in the rear-view mirror, an ambitious project is on the horizon.

Philanthropist and businessman Lecester “Bill” Allen said a redeveloped Target near Stonecrest Mall, dubbed the New Black Wall Street Market, is slated for a soft opening in May. The project, which aims to eventually feature more than 100 businesses, looks to imitate the development model that has made Ponce City Market and Krog Street Market successful, but with a focus on minority-owned businesses.

“This is something that’s been needed for a long time,” Clarence Boone, Stonecrest’s economic development director, said. “We feel like this will be a gamechanger for the city as it relates to commerce for Stonecrest.”

The new shopping location is acres away from the planned Atlanta Sports City project, which failed in 2019. Pitched as a destination offering dozens of sports fields, shops and restaurants, lawsuits against the project’s developers brought by businesspeople and organizations who invested money but never got to open are still working their way through the courts.

The city is now banking on Allen and his track record for success in south DeKalb to restore confidence among business owners.

“Projects don’t fail. People fail,” DeKalb Commissioner Lorraine Cochran-Johnson said. “So I trust that the proper people are in place in order to ensure the success of this project.”

In a recent promotional video, Allen stood inside the hollowed-out box store and spoke at length about his mission, emphasizing the project’s goal of supporting Black and women business owners.

May 31, the planned opening date for the New Black Wall Street Market, will be the 100th anniversary of the Tulsa Race Massacre, where Black business owners in Oklahoma were attacked by their white neighbors. Their business district, called Black Wall Street, was burned down and dozens of Black residents were murdered.

“We want to demonstrate a solution and show the building of a modern-day Black Wall Street,” Matt Hampton, an Allen Family Investments representative, said. Allen declined to speak to The Atlanta Journal-Constitution for this story, having Hampton speak in his stead.

Allen’s focus on Stonecrest was no accident, Hampton said. Allen moved to the area about 20 years ago and set up his Allen Entrepreneurial Institute that provides business education and support for minorities. Now, the city of about 54,000 people is nearly 93% African American, and Allen has become the largest commercial landowner in the city.

Cochran-Johnson said the new market is a perfect fit for a community like Stonecrest.

“It will give a platform to businesses that otherwise would not have had the opportunity to grow and thrive, especially in the Stonecrest community because there is such a lack of presence of retail businesses within the community,” she said.

More dining and retail options have been a consistent want among Stonecrest residents, who say they often have to leave the city to get higher-quality services.

“There’s a lot of restaurants in the city that really need kind of a benchmark, and I think that (the New Black Wall Street Market) this will give them that,” Gregory Pierce, a resident, said. “Show them what good looks like.”

Hampton said the market will feature a diverse food court, multiple art galleries, high-end restaurants and a jazz club. He said he couldn’t announce many of the businesses that are on board due to ongoing negotiations, but he said a grocery store named after Aaron, Allen’s son who died last October, will be among the first wave of participants. Hampton said they expect to have 10-20% of the 125,000 square feet of space occupied by the end of May.

“I’ve been doing some soft-selling with some businesses that I know would fit that profile,” Boone said of the city’s efforts to help fill out the market. “I’m prepared to put them in front of Mr. Allen and his team when they have decided that the marketing for their businesses is appropriate.”

Located off I-20 near the eastern border of the county, Allen, city leaders and residents want the New Black Wall Street Market to become a tourist destination, especially for those visiting Arabia Mountain’s popular hiking trails.

“I want it to be compared favorably to Krog Street Market,” he said, “If we can’t do that, I think we’ve kind of missed the mark.” 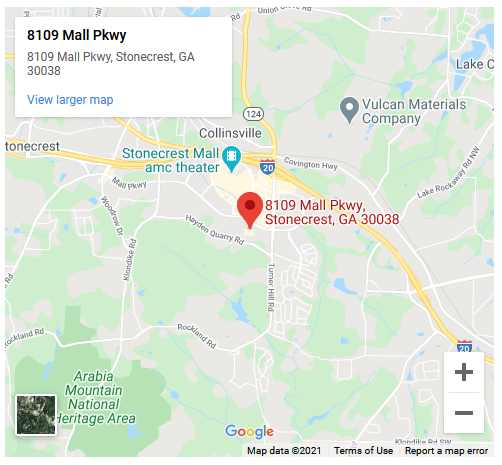 ‘We will not have another failure’

Other residents are trying to keep their expectations tempered, given the Atlanta Sports City fiasco.

Elijah Ajayi, a Stonecrest resident, said he defended the planned sports complex from critics after its announcement, but he doesn’t want to be let down again.

“My first reaction was, ‘Great! I would love to see this happening in our community,’” Ajayi said of the New Black Wall Street Market. “My next thought process was, ‘I really hope this is going to pan out because of what happened with the (Atlanta) Sports City.’”

The proposed $200-million development was initially planned to open before the 2019 Super Bowl took place in Atlanta, but the venture fizzled out before a single business had opened.

In an email, Stonecrest spokesman Adrion Bell wrote, “This private development (Atlanta Sports City) is dead and has been dead for years,” and city leaders declined to speak further on it. Neither did Hampton, who emphasized that Allen had no affiliation with Atlanta Sports City.

“We will not have another failure to that magnitude in Stonecrest on our watch,” Hampton said. “We will make sure that this development happens.”

The New Black Wall Street Market is the first phase of Allen’s larger development plans. In 2018, he obtained $700 million worth of revenue bonds from the Stonecrest Development Authority to build a complex that includes a 16-story hotel, an amphitheater and other mixed-use elements. Neither taxpayers nor the city are liable for repaying those bonds, since it’s supposed by repaid with revenue from the developer’s project.

The COVID-19 pandemic has forced those specifics to be reevaluated, Hampton said.

“We’ve really thought more about the residential and the multi-family living components as being the initial phases of that development,” Hampton said. “We know that commercial is changing, so we’ll have to see how the market responds in that way, but we are still very ambitious and very optimistic about our ability to bring that development out of the ground.”

Allen anticipated the larger plans could cost more than $1.5 billion over the next several years.

“We think if we can make incremental progress, it will help us fulfill our overall goal of properly developing the land and the opportunities that exist out here in Stonecrest, Georgia,” Hampton said.