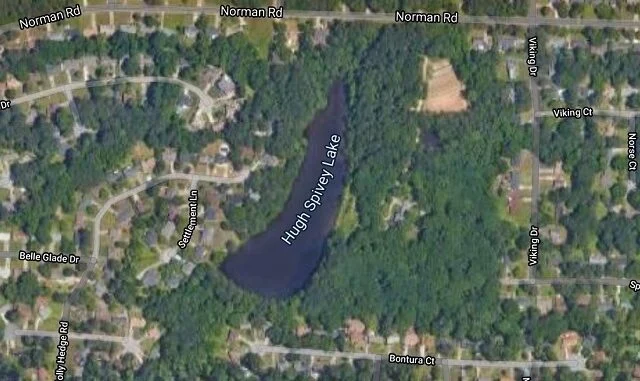 Mosaic Communities is one step closer to building a neighborhood of cottages, duplexes and single-family homes surrounding historic Hugh Spivey Lake in Stone Mountain. The 35-acre property at 3943 Norman Road is in the Memorial Drive corridor that DeKalb County is trying to reinvigorate.

DeKalb County Planning Commission at the Jan. 6 meeting voted to recommend rezoning from R-85 (residential medium lot 85) to RSM (small lot residential mix) with conditions to the DeKalb Board of Commissioners.

The project has been billed as affordable housing, although it will require Home Owners Association fees.

Through months of meetings with Mosaic, neighbors in opposition have negotiated the number of units down from 228 rental units to 120 units for sale, with 15% of those for rent.

But the main issue from the opposition who spoke at the Jan. 6 meeting is the insufficient tree preservation, tree banking and lake preservation and remediation on site.

“There’s a blue line stream that’s shown on the GIS map which is not showing these plans, which is a concern … The dam has not been well maintained and probably will have to be repaired, which may mean draining the lake for a period of time,” said Dunaway.

Neighbor Oona Powell said the property is a fragile environment with multiple streams running through it.

“We have a lake that is in disrepair and I think the work to repair it may damage it further,” said Powell. “I also understand that there are properties downstream from this development that are already under pressure from flooding and high water when there are severe storms.”

“The developer will have to conform to any remediation of the lake by county and state standards before the final plat is recorded, or issuance of building permits,” Webb said.