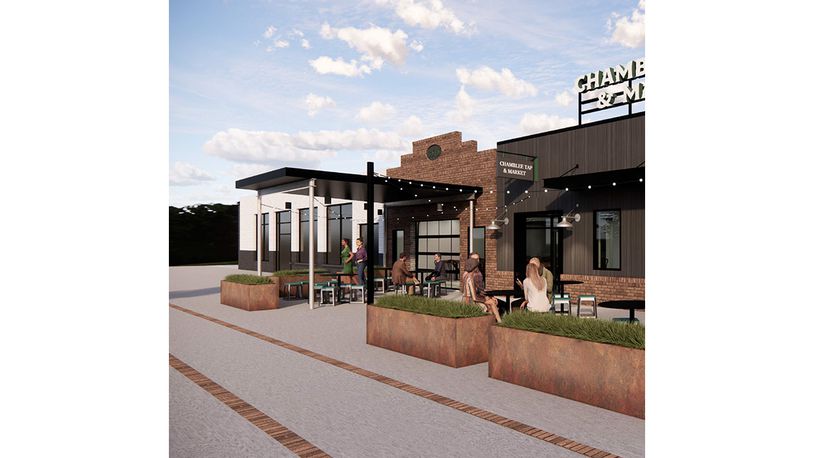 A rendering of Chamblee Tap and Market.

A new food hall and taproom is set to open next year in downtown Chamblee.

The space will likely feature four food stalls and 20 taps with beer and wine and a coffee shop. Seating will be available at an L-shaped bar, tables throughout the hall and on a covered patio.

Kimmel and Heymann, who have been friends for more than a decade while working in banking, came up with the idea for the project during the pandemic. They’d gather on what they called Beer Club Sundays, and talk about going into business together.

“We liked the idea of bringing a nice spin to the food hall market, especially in Chamblee where there isn’t anything like it,” Kimmell said.

During their get-togethers, the pair would also spend time ranking beers, “and thought it would be funny that if we did open the taproom, we could do this on a larger scale,” said Heymann.

The building in Chamblee, formerly home to an antiques resale and restoration business, attracted their attention, in part, because of its location across from the new city hall and down the road from the recently opened Distillery of Modern Art. In addition, the city voted in May to allow taprooms in Chamblee’s downtown.

“Everything that’s being planned for the area is coming together really nicely,” Heymann said.

The taproom will feature a rotating list of 20 local and national beers on draft, including “some things you’re not going to be able to get in your local bottle shop,” Kimmell said. Five additional taps will be dedicated to wine. A retail component is also planned.

On the other side of the building, four to five food stalls will be home to concepts that Kimmell and Heymann are in the process of solidifying. Their goal is to assembled “a nice mixture that will appeal to as many people as we can,” including kid-friendly options.

They hope to secure food stall vendors and an established operator for the coffee shop by the end of the year, and before they begin a gut rehab of the 5,000-square-foot building.

Sign up for the AJC Food and Dining Newsletter

What parents should know about monkeypox in schools