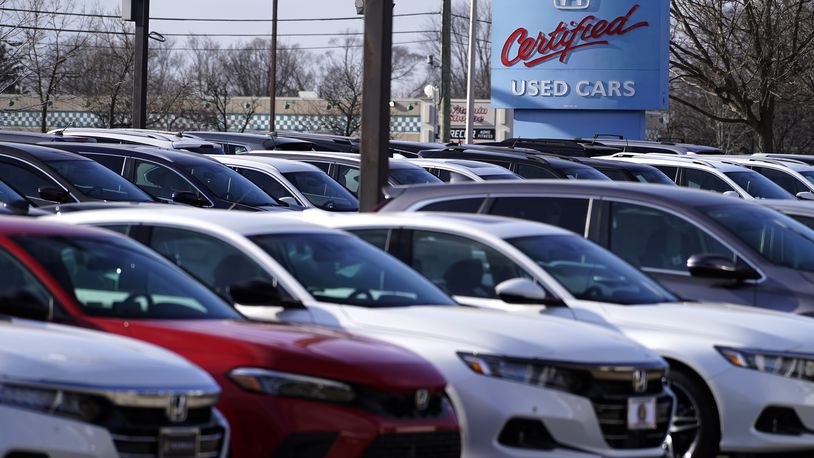 Prices for vehicles are among the components in the inflation numbers calculated by the government. Those prices have been soaring. (AP Photo/Nam Y. Huh)

Inflation in metro Atlanta jumped to a yearly rate of 9.8% in December, the highest price increase the region has seen since late 1981, the government reported Wednesday.

Rising costs for housing, cars, trucks and food fueled the year’s gains, overriding the impact of declining energy prices and moderating food costs in the calculation of the Consumer Price Index, according to the Bureau of Labor Statistics.

“I think this looks like an economy that was shuttered that is opening itself up again. It is going to be different from the one we left behind. And these things take time to play out,” he said.

Atlanta’s CPI outpaced the nation’s, which rose 7% during the past year, the highest increase countrywide since 1982.

That partly reflects the region’s strength, Delaney said. “People are throwing money into places that they think will be good places to live.”

Both rents and home prices saw double-digit growth last year in metro Atlanta. And the housing component accounts for about one-third of the CPI calculation.

Most other measures were also up, but not equally.

With many consumers shying away from in-person contact, while job growth padded paychecks, spending on goods has far outpaced the demand for services. The surge of purchases has overwhelmed production of many items at the same time that many Asian factories have been intermittently shuttered to fight COVID-19 and many U.S. companies struggle to find enough truck drivers and other workers.

The result has been a smattering of shortages along with higher costs of shipping, ground transport and storage.

In metro Atlanta during 2021, the average price of new vehicles in metro Atlanta rose 33%, while used vehicles were up 37% and apparel 14%. Despite a significant drop in gas prices the past two months, the cost of fuel was still 56% higher over the year.

Not everything rose so fast. The price of food at home edged up just 2%, and tuition climbed 5%, while dairy prices were down.

Inflation has a mix of impacts. It is typically painful for people on fixed incomes and businesses that cannot raise their prices, but it also hurts banks and other lenders who receive payments in dollars that are worth less than those lent out earlier. That means it can be good for borrowers or companies with freedom to lift their prices.

In general, inflation signals that demand for goods and services is growing faster than their availability, yet not all inflation is the same. There were huge price spikes after World War II when millions of soldiers returned to the workforce — but the economy adjusted and inflation abated.

More persistent was the price escalation of the 1970s and early 1980s, when expectations of higher prices became embedded in wages and company planning. That spiral was stifled only when the Federal Reserve ratcheted interest rates high enough to strangle growth, causing a recession that cut demand.

Optimists had hoped that this bout of price hikes would — like that of the 1940s — be temporary. So far they have been wrong, although inflation is nowhere near the heights it reached decades ago.

But the current rate is still high enough to provide political ammunition against the Biden Administration, while generating more pressure on the Federal Reserve to raise interest rates soon.

As the pandemic hit, the Fed kept short-term interest rates near zero to spur business investment and protect consumers from crushing debts. Meanwhile, Congress passed a series of huge packages that provided money to unemployed workers and to many parents.

It is that financial “liquidity” that is behind the higher prices, shortages of some products and some of the supply chain bottlenecks, said economist and supply chain expert Aleksandar Tomic at Boston College.

“There are the manifestations of the underlying liquidity in the economy,” he said. “It will persist until the government and the Federal Reserve do something about it.”

Yet the pandemic is still key, said economist Caroline Fohlin of Emory University.

The newest wave of the virus has meant disrupted supply chains, especially in China, while also causing school closures and worker shortages in the United States, she said. “We can only hope that this wave ends soon, and that we can move to the much-awaited next phase, whereby we learn to live with COVID without serious disruption to daily life.”

Inflation* in past year

Atlanta could break its no-snow streak this weekend

DeKalb Board of Registration and Elections Announces New Executive Director