Just 3.5% of DeKalb’s rental assistance funds have been distributed 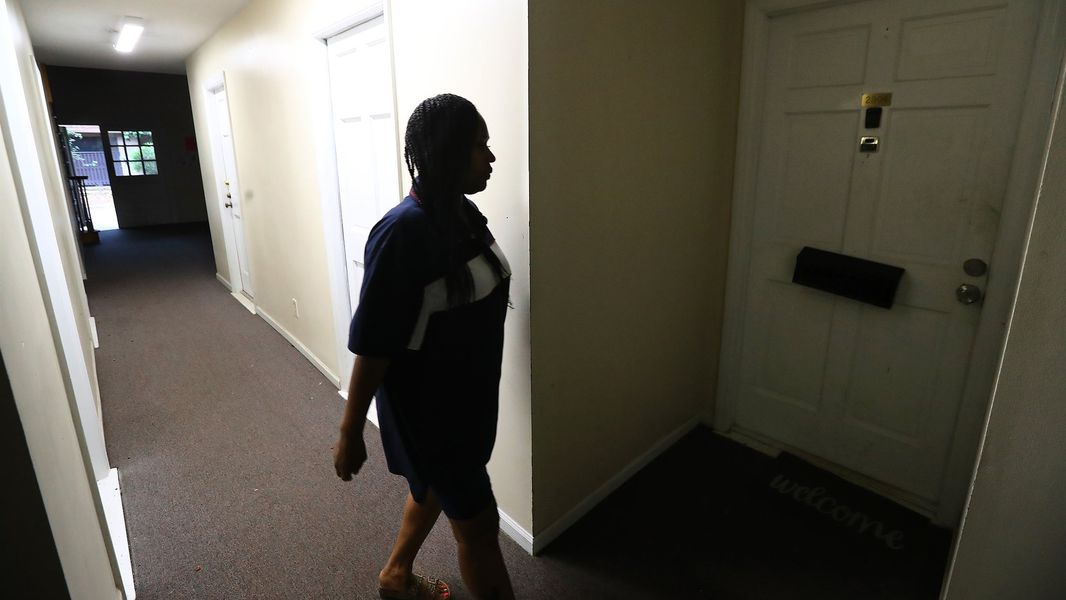 Monica Griffin at her apartment in Stonecrest. (Curtis Compton / ccompton@ajc.com)

Thanks at least in part to a cyberattack, DeKalb County has distributed only a small fraction of the $21 million it set aside earlier this year for emergency rental assistance.

County CEO Michael Thurmond is expected to make an announcement about “the next steps” for the so-called Tenant-Landlord Assistance Coalition later this week. But what those steps are remains unclear — and advocates, struggling renters and even some county leaders are asking DeKalb officials to act with more urgency and, perhaps, rethink their entire strategy.

The county has distributed just 3.5% of the funds, with the eviction moratorium put in place by the Centers for Disease Control and Prevention is set to expire at the end of the month.

“These families need help now, and they can’t wait any longer,” Ellie Thaxton, a community advocate from the Clarkston area, said Tuesday.

DeKalb leaders announced the TLAC program, which is funded by a federal grant, in February. Applications for the program were open for about 10 days before the county decided to close them, citing “overwhelming” demand.

The TLAC program was designed to assist the thousands of county residents already in some stage of the eviction process due to lost wages and other hardships caused by the COVID-19 pandemic. Its structure — which involves the local court system, mediators, representatives from Atlanta Legal Aid and others — already increased the likelihood that the program would take some time to get rolling.

The hack didn’t help either.

On April 1, the county announced that the program had been targeted by a cyberattack about a week earlier. Officials said at the time that they were “unaware of any actual compromise or misuse of customers’ information,” but that emails and applications previously sent to program administrators were included on a server that had to be disabled and disconnected.

Zach Williams, the county’s chief operating officer, said during a Tuesday county commission meeting that the FBI is involved in an ongoing criminal investigation and blamed the incident for slowing the distribution of funds.

“But for the fact we were victims of a crime,” Williams said, “we would not be having this conversation today, necessarily.”

County officials later told The Atlanta Journal-Constitution that around $736,000 had been distributed. A total of 193 households had been assisted.

Thurmond relayed similar numbers in an interview with the AJC last week.

At least two county commissioners said Tuesday that reading Thurmond’s statements in the newspaper was the first time they’d been made aware of the severity of the situation.

District 6 Commissioner Ted Terry called for the TLAC program to be “reset or scrapped altogether,” and for money to be redirected toward local nonprofits that helped administer funds from previous federal stimulus packages.

“People are becoming desperate,” Terry said. “We are getting more and more emails and calls from our DeKalb neighbors begging for relief. We need to act now.”

One of those neighbors is Stone Mountain resident Angelique Anderson, whose written statement was read during the public comment period of Tuesday’s meeting.

Anderson described herself as a single mother of four who had to leave her job during the pandemic to watch her children and help them with virtual schooling. She wrote that she applied for unemployment benefits but never received them, applied for DeKalb’s rental assistance program but never heard anything back, and is $3,500 behind in rent.

“I am now under eviction and cannot move anywhere else due to having an open eviction case. The complex will not accept partial payments, only full payment,” Anderson wrote. “I am stuck.”

The Atlanta Legal Aid Society is working with DeKalb County in the TLAC process, representing renters as they negotiate how to settle things with their landlords. Lindsey Siegel, an attorney with the group, said new cases are being resolved and money’s being distributed every day — “but it’s not happening quickly.”

Siegel said some of delays have to do with landlords being unwilling to engage in negotiations, refusing partial payments, or not responding at all.

She echoed sentiments shared by Terry and others, saying it was important to “think about spreading the money out” and distributing it through other avenues.

“The speed at which we can get this money out is really going to make a huge difference for tenants,” Siegel said.

Asked directly if the county would consider redistributing some of the TLAC money to local nonprofits, a county spokesman responded by saying DeKalb had allocated more than $11 million that way during previous rounds of federal relief.

Asked if there was an expectation for all of the TLAC funds to be in the hands of tenants and landlords by the end of the month, he simply said: “No.”

The spokesman said Thurmond would make an announcement regarding the program “no later than Friday” but provided no further insight.

The CEO said last week that he wants “every dime to go out the door for people who need it.”