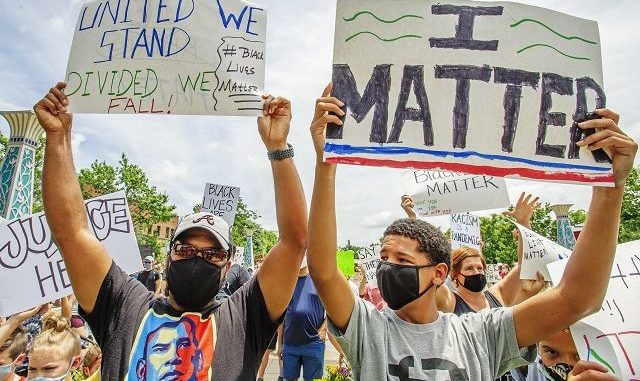 Robert Nobles (l) and his son Robert Jr. , 13, hold up signs during a peaceful demonstration sponsored by the Beacon Hill Black Alliance for Human Rights June 7. Photo by Dean Hesse.

Robert Nobles (l) and his son Robert Jr. , 13, hold up signs during a peaceful demonstration sponsored by the Beacon Hill Black Alliance for Human Rights June 7. Photo by Dean Hesse.

DeKalb County, GA — At least three cities in DeKalb County have lined up their first-ever Juneteenth celebrations later this month to commemorate the end of slavery in the United States.

Decatur, Stone Mountain and Clarkston have a number of activities lined up for their first Juneteenth events on June 19. Avondale Estates looks to grow its second annual event.

Recognizing Juneteenth should be a requirement for cities that call themselves progressive, according to Fonta High, co-chair of the Beacon Hill Black Alliance for Human Rights. The BHBAHR is partnering with the city of Decatur for its event.

“People have the opportunity to feel seen in a way they didn’t before, as they proudly showcase and share their culture,” High told Decaturish. “This idea of feeling seen is important for any human and can assist in the healing process for those of us who have experienced racial trauma.”

“Because the city is actively engaged in anti-racism work, it only makes sense that Juneteenth occurs in Decatur and that it continues to do so annually,” she added.

The Juneteenth event in Decatur will take place from 4 to 8 p.m. on the city Square. The theme is “Liberate, Educate, Celebrate,” and the day will include music, vendors and a youth art and mural project.

The event also falls on the one-year anniversary of the removal of a Confederate monument from the Square. Accordingly, advocates and activists from around the state will share lessons from their efforts to remove such symbols in their communities.

“As we remember the removal of the Confederate obelisk on Juneteenth 2020, the city of Decatur is proud to be a partner in planning the first official Juneteenth event, and we look forward to this being the first of what we hope becomes an annual tradition,” Mayor Patti Garrett said in a press release.

Juneteenth is celebrated on June 19 to mark the day in 1865 when a Union general arrived in Galveston, Tex., to inform enslaved African Americans of their freedom. The announcement put into effect the Emancipation Proclamation, which President Abraham Lincoln issued more than two-and-a-half years earlier.

The Stone Mountain City Council issued a proclamation making Juneteenth a holiday last year. This year, they’re stepping it up with a large block party downtown.

City Councilmember Jasmine Little has been a force behind the event.

“I just think that it’s important that people celebrate freedom,” she said. “I would love to see our city do a lot of festivals. But this one just seemed like it came at the perfect time. And it’s just right.”

The celebration marking the end of slavery also happens to be taking place in the city known for having the world’s largest Confederate monument. Little doesn’t know if hosting a Juneteenth event will change people’s perceptions about the city.

“I think that any time you try to change a perception, it takes time,” she said. “I don’t know if it will change anything, but I just know that we’re just going to have fun.”

The event will take place from 6 to 9 p.m. and will include fireworks, live music, dancers, drummers, vendors and a tribute to the late U.S. Rep. John Lewis.

A candidate for Stone Mountain mayor criticized Little for allegedly denying his campaign’s application to be a vendor at the event. Darryl Gresham claimed in a press release that the application was denied ‘because we have been vetted as a political campaign.’

“The Juneteenth event is to celebrate freedom,” he said. “The city of Stone Mountain has banned The Committee to Elect Darryl Gresham from this event, which is in clear violation of our rights and freedom of speech. We consider this action a gross and a great error.”

The Clarkston City Council voted in December to recognize June 18 as a city holiday in honor of Juneteenth. The council also adopted a Juneteenth Day proclamation at its meeting earlier this month.

The city will cap those moves off with its first Juneteenth celebration on June 19.

“Clarkston is known as a welcoming city,” Mayor Beverly Burks said. “Therefore, I feel it is essential to provide events such as Juneteenth that recognize, honor and embrace our African-American community in our city.”

Burks and Councilmembers Debra Johnson and Laura Hopkins serve on the city’s Diversity and Inclusion Standing Advisory Committee, which is organizing the event. Johnson is chair of the event.

“Based on the tragedies that African Americans are continuously facing today compared to what our ancestors endured, I feel celebrating this holiday will allow us an opportunity to bask in the accomplishments of our ancestors,” Johnson said.

“Juneteenth reminds us that we have come a long way from slavery, but we still have a long way to reach equality in this country,” she added.

Hopkins said that Juneteenth distills the most vital parts of Independence Day, Veterans Day, Memorial Day, Thanksgiving and a birthday all in one. She called the U.S. Army’s enforcement of the Emancipation Proclamation in 1865 “the military’s most proud moment.”

“It is the most unequivocally correct, impactful and necessary action in which the Army has ever engaged and probably ever will,” she said. “As a result, hundreds of thousands were granted their lives back and the cancer of chattel slavery was removed from the American landscape for good.”

Clarkston will host webinars on the history of Juneteenth throughout the week leading into the event. The Juneteenth celebration will take place from 4 to 8 p.m. at the Tahoe Village Shopping Center. The free event will feature music, entertainment, storytelling, vendors, food and more.

The Avondale Alliance for Racial Justice will hold its second annual Juneteenth Jubilee Stroll on June 19.

“The leadership of the AARJ believes that hosting events that celebrate the achievements of African Americans as they have fought to achieve equality and inclusion in America is vital to build community and celebrate diversity in Avondale Estates and DeKalb County,” AARJ member and event organizer Nisheena Clemons said.

The event will take place from 5 to 7 p.m. at several locations along Avondale Road and College Avenue. At My Parent’s Basement on North Avondale Road, there will be live music by Dia Scott, drumming, a dance class by Dance Werk by Ayesha, and dance and musical performances by students from the DeKalb School of the Arts. At Banjo Coffee on North Avondale Road, there will be a Kiddie Korner with storytelling, coloring, toy drum making and Juneteenth education. There will be food and other vendors in front of 1 Shot Wellness on East College Avenue. Food and beer will also be for sale at My Parent’s Basement. Attendees are encouraged to bring their own lawn chairs if needed.

“We see this as our moment to bend the great arc of history even further toward justice, and we are not going to waste a second,” Clemons said. “Truthfully, in the wake of all that’s happened in this country in the past year-and-a-half, the question we ask ourselves is not why host another Juneteenth event, it’s how can we not host another Juneteenth event and many other events celebrating the various holidays and culture of Black, Indigenous and people of color in the future.”

AARJ was formed in June 2020 after the murders of George Floyd, Ahmaud Arbery and Breonna Taylor.