Hundreds of local poll workers unpaid due to staff turnover 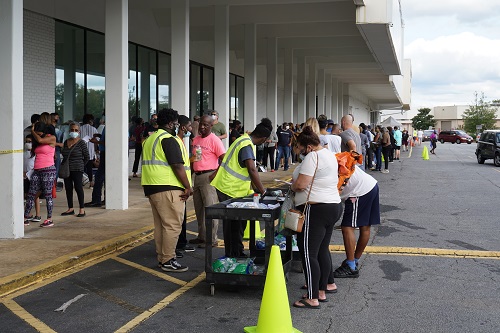 Voters wait in line outside the DeKalb County Elections and Voter Registration Office during October early voting for the General Election.

“I’m like most of the poll workers and I’ve done it for years and they know we can do the work. The job has been complete. There were no issues, so why have we not been paid?” asked Alpreshia Pressley, one of the angered poll workers willing to speak about the issue. “And if we haven’t been paid, give us an honest assessment on when we will be paid. This nonchalance adds insult to injury.”

Pressley, said she and others have not received a definitive response from elections staff regarding the pay issue, and when they ask, the response was often vague. Pressley said she worked a week during the early voting period October 12 through 30, some days up to 12 hours, and claims poll workers were told that they would be paid one to two weeks following the Nov. 3 General Election. After not receiving pay by the third week of November, Pressley and others have attempted to get answers from the elections office.

“I haven’t been able to speak with any managers and the young lady I spoke to [at the elections office last week] is relatively new and said she [also] hadn’t been paid yet,” said Pressley, a poll worker for five years. “That made me even more concerned. It just seems to be a snowball effect that I’m not really sure what is going on.”

The delay has caused some poll clerks to consider not working the upcoming U.S. Senate runoffs, Pressley said, which is expected to result in another large voter turnout.

“[After the Nov. 3 election results] We started getting calls to come to work in December for the Jan. 5 [U.S. Senate] runoff…and we’re like we’re happy to work but you haven’t paid us,” said Pressley, who is recently unemployed due to her job shutting down. “I’m trying not to let it shape my decision but since I’m not working and am available, that would lock me in [those days]. But it does shape my opinion…like how do you give up a week, and not know if you’re going to get paid?”

Following the Nov. 3 election, the elections department, and all departments throughout the state, have been involved in a series of recounts as a result of the close-margin victory in the U.S. presidential race.

In a statement to The Champion, a DeKalb County spokesperson reported approximately 250 DeKalb County Voter Registration and Elections (VRE) poll workers who worked during early voting and 200 non-permanent elections office workers will be paid Dec. 4.

Approximately 400 workers employed worked during the Nov. 14-15 audit/recount will be paid before or on Dec. 18. The delays are attributed to staff turnover.

“The primary cause of the payroll delays was due to VRE payroll staff turnover during the height of the election season,” the county stated.

In response to an email from Pressley to the DeKalb County Elections Board, board member Susan Motter expressed her frustration with the issue, stating she is tired of stepping around “too many broken plates on the ground.”

“I specifically referred to needed managerial tasks, including getting people paid,” she stated, referencing a conversation held during a board meeting. “That was a statement made in specific reference to several instances of which I know poll workers, staff, and outside parties not being timely paid. This failure to not timely pay people is becoming all too routine.”

In early October, DeKalb County received a $4.8 million grant from the Center for Tech and Civic Life (CTCL) that was to be used to enhance election operations.

According to an Oct. 6 press release, the CTCL grant was expected to be used to hire more personnel and operate additional early voting and Election Day locations, among other things. “These funds will be used to address longstanding operational issues and increase voter safety and confidence in our voting process,” stated DeKalb CEO Michael Thurmond in the press release.