How an ‘edible library’ sprouted up in Clarkston 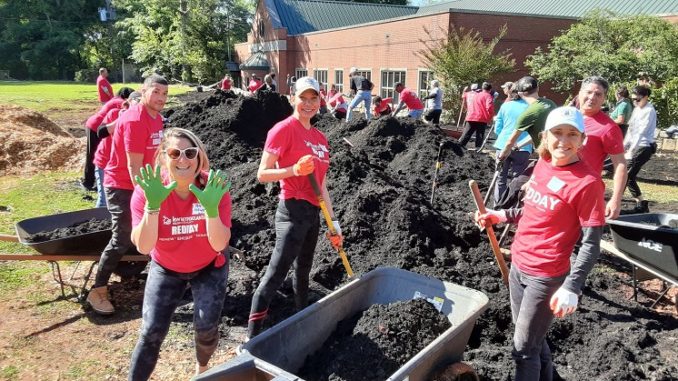 Roots Down works with local government agencies to build productive urban landscapes throughout DeKalb County. They broke ground on the “edible library” project in April.

“Libraries are the perfect place for PULs, because they offer free learning opportunities for everyone in the community,” Roots Down CEO Jamie Rosenthal said in a press release. “PULs expand those offerings by increasing the number of species on the property — from plants to insects to birds.”

“Not only can you harvest fruit while listening to a songbird, you can head straight inside to learn about the health benefits of the fruit and the migratory patterns of the birds,” he added.

The Decatur-based Keller Williams office got involved in the project as part of its annual national day of service. At least 85 KW volunteers put in over 500 hours of service to help Roots Down finish the project on May 13.

The KW office was eager to support the people of Clarkston, according to team leader Sean Dammann.

“Many of the residents are refugees who are accustomed to living off the land and many are on a very fixed budget,” he told The Tucker Observer. “This project supplies fresh food for anyone in the community to enjoy.”

KW volunteers also built and installed several benches for visitors to use when they visit the garden. And Roots Down and KW also converted a nearby barren right-of-way into a quarter-acre pollinator landscape.

The project was initially slated to take four to five months to complete, but KW’s support helped Roots Down finish it in a few weeks, according to Rosenthal.

“In addition to the great group of volunteers, we wouldn’t be able to accomplish any of this without DeKalb County Commissioner Ted Terry and the hard work of the entire DeKalb County facilities team, and our landscaping partners on the project, Pygmy Goat Folx and Think Green Inc,” he said.

The Fryer Law Firm also supplied breakfast for the volunteers.

The edible library project in Clarkston is part of a six-site pilot program that Roots Down launched throughout DeKalb in April. The other libraries include Stonecrest, Redan Trotti, Hairston Crossing, Salem-Panola and Lithonia.

Roots Down also installed a wildflower field across from the Scottdale-based art and performance venue Heck.house and edible soccer fields at The Mohammed Schools of Atlanta in the past year.

“Roots Down’s goal is for everyone to be a five-minute walk from free food,” Rosenthal said. “By cultivating food forests in our communities, not only do we achieve pesticide-free food available for everyone, but we also create a more educated populace that understands they can easily grow what they need right on their own block.”

KW Realty Metro Atlanta’s second day of volunteerism for the year — the annual Taste of the Town fundraiser — will take place in Decatur in the fall.

Chamblee poised to get new affordable housing development for seniors

Lithonia Market on Main is back