At least one Republican senator said he was open to the move, while Trump announced he won’t attend Biden’s inauguration. WASHINGTON — House Democratic leaders are eyeing a vote on articles of impeachment against President Donald Trump as early as the middle of next week, Assistant House Speaker Katherine Clark said Friday.

“We know that we have limited time, but that every day that Donald Trump is president of the United States, is a day of grave danger. So we can use procedural tools to get articles of impeachment to the floor for a House vote quickly,” Clark, D-Mass., said on CNN’s “New Day.” Asked how early the House Judiciary Committee could bring the articles to the floor, Clark said, “That will be…as early as mid-next week.”

After the interview, Clark clarified that Democrats are still working to determine the timeline. 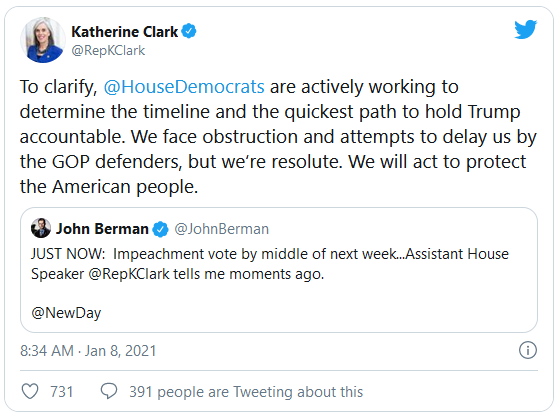 There have been only a handful of times throughout American history when an outgoing sitting president did not attend the inauguration of his successor. John Adams, John Quincy Adams and Andrew Johnson all skipped the event, while Richard Nixon departed the White House after his resignation and did not attend Gerald Ford’s swearing-in.

On Thursday night, Clark told MSNBC’s Chris Hayes that Democrats are “resolute” in holding Trump accountable and said they plan to move forward with impeachment if Vice President Mike Pence declines to invoke the 25th Amendment.

NBC News has learned Democratic leaders met Thursday evening to discuss how to remove the president from office, according to a member of Congress who was in the room. They discussed how to expedite the process and could call the House back into session as soon as Monday to start the process.

The matter has not yet been decided, and there were voices in the leadership meeting advocating for different approaches to the question of whether to impeach. But with Vice President Mike Pence seeming to signal he will not invoke the 25th Amendment, the discussion became more urgent Thursday.

Leaders will discuss the matter during a noon conference call with the House Democrats.

It’s not clear if any Republicans in the House would be willing to support impeachment at this point, but members are so angry about what happened at the Capitol that the political assumptions and norms are not as they have been. “People are pissed,” one Republican source said.

An impeachment floor vote in the middle of next week would give the Senate only a week to hold a trial before President-elect Joe Biden is sworn in on Jan. 20.

Read the original story on NBCNews.com.

Board of Health Opening Registration for COVID-19 Vaccine Phase 1A+, COVID-19 Testing to Resume Monday at Single Location