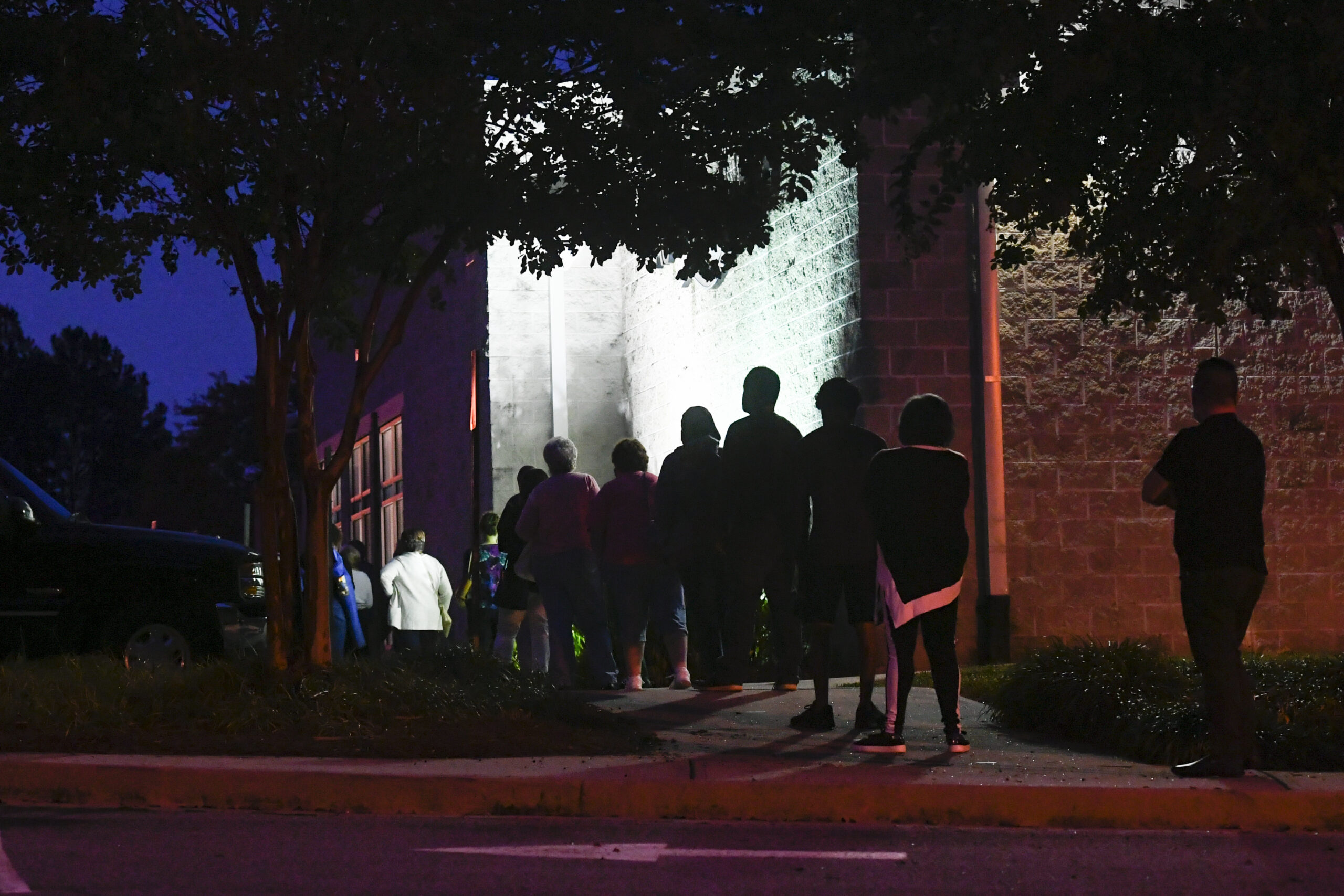 A line is formed before dawn as the first day of early voting gets underway on Monday, Oct. 12, 2020, at the Mountain Park Activity Building in Stone Mountain. JOHN AMIS FOR THE ATLANTA JOURNAL- CONSTITUTION

Eager Georgia voters swarmed to polling places Monday morning, waiting in lines created by turnout and technical problems at the start of three weeks of early voting before Election Day.

Voters filled parking lots and prepared for delays as they locked in their choices in advance of Nov. 3. Even before polling places opened, voters wrapped around buildings.

“It was a little frustrating,” said Adrienne Crowley, who waited an hour and a half to vote at State Farm Arena. But she said she didn’t even think about getting out of line. “I would have voted all day if I had to.”

“We apologize to all the voters,” Barron said. 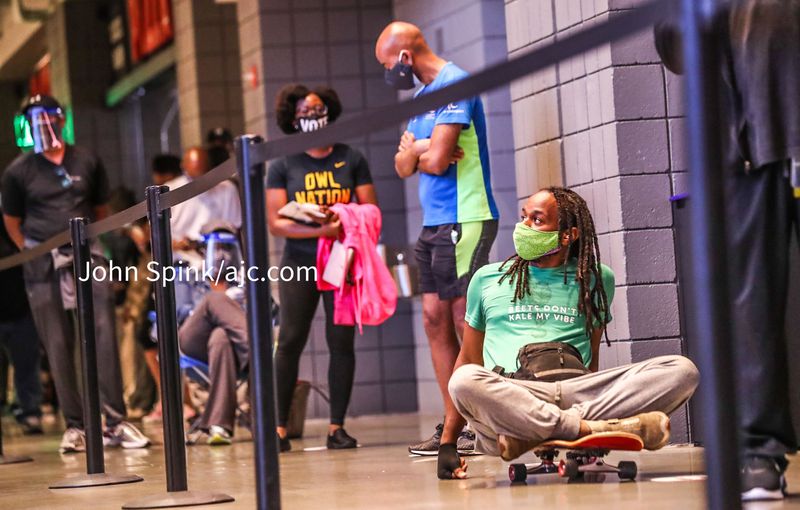 Other early voting sites include a former Atlanta Hawks star’s training facility, government offices and even a bus filled with voting touchscreens. At the High Museum of Art in Atlanta, at least 130 voters waited to cast their ballots when polls opened.

Spaced 6-feet apart, the vast majority of voters wore masks with some exceptions.

Smyrna resident Arlevia Bell just moved to Georgia from Louisiana in July and said she’s frustrated at the long line outside the South Cobb Regional Library.

“I think it’s ridiculous that we are just now moving,” she said, adding she had been stuck in the same spot for 15 minutes.

Danielle Driscoll of Smyrna said she was surprised to see the line snaking around the library.

All registered voters are eligible to participate in early voting, allowing them to pick a time that fits their schedule and avoid lines on Nov. 3. Voters must cast their ballots in the county where they’re registered, but they can choose any location within their county.

Unprecedented interest and social distancing requirements led to lines, but election officials said their goal is to keep lines moving and avoid problems like those seen in Georgia’s primary. In the June 9 election, high turnout, poll worker shortages and difficulties with voting equipment led to waits of over three hours in some areas.

At Lucky Shoals Park near Norcross, the wait was more than an hour Monday morning.

Janice Elliott-Howard, 54, said she was encouraged — not surprised — by the lines. For her, voting in person was an easy decision.

“I think it’s the safest way to vote. Safe and then you know your vote is in,” Elliott-Howard said. “I don’t trust putting it in a box or leaving it up to the mail.”

At the Tucker library in DeKalb County, Roy Rustin, 74, arrived at 5 a.m. wearing his red bandana. He has a weakened immune system and figured he would get in and out quickly when the polls opened. He said he sees it as his duty to vote, but didn’t trust the absentee ballot system.

“I figured if I’m first in line this would be the least dangerous way,” Rustin said, adding that he sees voting as part of his duty as a citizen.

By the time he voted shortly after 7 a.m., the line at the library snaked through the parking lot and out onto the sidewalk.

There were “extended waits” at some DeKalb voting locations but no technical issues or late starts, said spokesman Erik Burton.

In-person early voters will join the 439,000 Georgia voters who have already returned their absentee ballots. By the time Election Day finally arrives, over two-thirds of the state’s 5 million projected turnout will have already voted.

Early voters will use Georgia’s new voting system, which combines familiar touchscreens with the addition of printed-out paper ballots. Voters will be able to review their choices on the paper printout before inserting it into an optical scanner.

A judge’s ruling late Sunday allowed Georgia to continue using the voting system, turning down an effort from election security advocates to switch to paper ballots filled out by hand.

The early voting experience is different from years past because of coronavirus-related safety precautions.

Voters were spaced 6-feet apart and separated from poll workers by Plexiglass shields when they check in. Elections equipment will be frequently wiped down and sanitized. Voters were provided with styluses if they don’t want to use their fingers on touchscreens.

Ryan Drummond, 42, is a new citizen and first-time voter. By 8:30 a.m., he had already waited for about an hour outside the early voting location at Mountain Park Activity Building in Gwinnett County. He still had a ways to go.

Drummond said he decided to vote early because he didn’t want to wait for Election Day, and the confusion surrounding mail-in ballots made him uneasy.

“Being a first time voter, I didn’t want to make a mistake so it would be rejected,” he said.

There are over 60 early voting locations in metro Atlanta’s four core counties, including more than 30 in Fulton County alone.

Voters can find early voting sites and hours county elections website or on the state’s My Voter Page at www.mvp.sos.ga.gov.

Please return to AJC.com for updates from early voting locations. Tell us about your voting issues by filling out a form by clicking here.