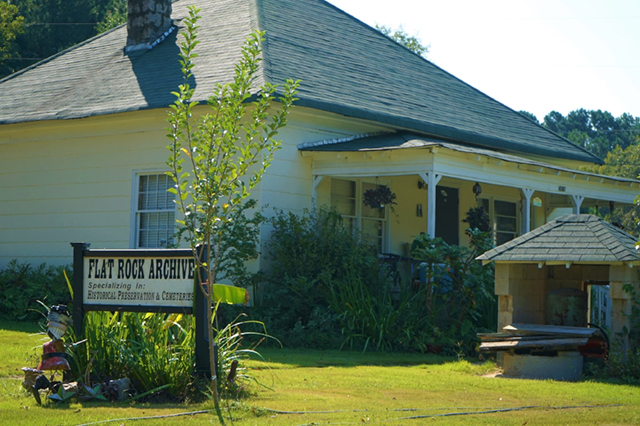 Preserving history has challenges, especially when the stories from the past are told through fragile documents that may be damaged by moisture, sunlight and a number of other environmental influences, explained Victoria Burgos, a board member of Flat Rock Archives in Stonecrest. That’s one reason Flat Rock is so pleased to have been named among the recipients of 2020 grants from Georgia Archives, she said.

“The grant, $1,200, doesn’t seem like a lot to many people, but it helps us buy materials to preserve physical documents with items such as dehumidifiers and sleeves that protect materials from sunlight,” said Burgos, who added that the Georgia Archives money will be used with another grant that Flat Rock was recently awarded.

Flat Rock Archives was created after area native Johnny Waites realized that the stories he had heard throughout his childhood about an area rich in rural American history would be lost forever unless a focused effort was made to preserve it. In the early 1980s, he started to collect the items that would tell his community’s story. In December 2006, Flat Rock Archives opened to the public.

Since its opening, Flat Rock Archives has received local and national recognition, including events and exhibits at DeKalb History Center and numerous awards. It also has become part of the Arabia Area Heritage Alliance.

Actor Chris Tucker, who hails from the Flat Rock community, brough national attention to the area when he was featured in the 2006 series African American Lives, hosted by Harvard professor and historian Henry Louis Gates Jr.

“We get visitors from all over the world,” Burgos said. “Our story is a compelling one for people of all backgrounds.”

Flat Rock Archives has suspended its programs and closed to the public because of the current public health crisis, Burgos explained, “but this is giving us a great opportunity to pore through items that were placed in storage during a structural upgrade. We are able to take the time to see what we have and how it should be displayed—to organize and prepare exhibits. It’s actually a very exciting time.”

The website describes Flat Rock Archives as sitting “within an historical landscape” and including the more than 100-year-old Georgian Cottage known as the T.A. Bryant Sr. House, donated to the archives by Bryant’s family. The site also includes a barn, smokehouse, and outhouse constructed during the early 20th century.

Burgos, who was involved in applying for the Georgia Archives grant, explained that since its opening Flat Rock Archives has conducted an ongoing effort to secure funds to restore and protect what the website calls a “unique treasure of the rural historical landscape.”

Before applying for the grant, Flat Rock officials took a close look at the institution’s goals for the immediate future and consulted with other regional archives to compare what they were doing and determine what would be most useful, according to Burgos. “From there, we created a budget and submitted our plans to Georgia Archives,” she said. “We’re very excited about what visitors will find when they come here after the pandemic is over.”

During normal times, Flat Rock Archives focuses primarily on education and awareness, Burgos explained. “We want school children and adults to come here and learn about what life was like for African Americans in the rural South 100 years ago—the challenges and the creative ways people overcame their challenges. The grant money helps keep the energy going, but we like to remind people that the need for funding is ongoing.