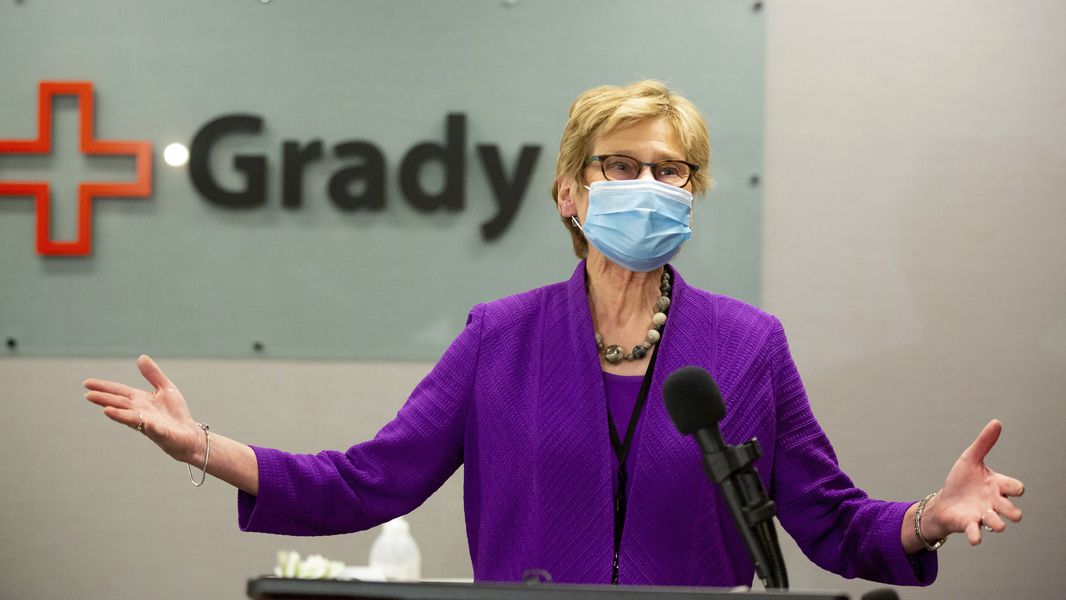 Dr. Kathleen Toomey provides updates on COVID-19 in Georgia at a press conference before receiving her COVID-19 vaccination at Grady Hospital on Dec. 17, 2020. (Steve Schaefer/Atlanta Journal-Constitution via AP)

‘A wake-up call for all Georgians,’ says state’s top doctor.

As hospitals struggled with a record surge in hospitalizations Tuesday, Georgia announced its first confirmed case of the new coronavirus strain that has overwhelmed the medical system in the United Kingdom.

The Georgia Department of Public Health (DPH) said the case was discovered in an 18-year-old man with no travel history. The teen, who was not identified, is isolating at his home, and state officials are working to identify, monitor and test the teen’s close contacts.

The U.K. strain, also known as B.1.1.7, is believed to be much more contagious than the typical SARS-CoV-2 virus. Though the variant is not believed to be more lethal or cause more severe illness once a patient is infected, its feared transmissibility has raised alarms as the U.S. is gripped by its third, and so far, worst wave of the virus.

“The emergence of this variant in our state should be a wake-up call for all Georgians,” said DPH Commissioner Dr. Kathleen E. Toomey. “Even as we begin roll out of a COVID-19 vaccine, we must not let down our guard and ignore basic prevention measures — wear a mask, social distance and wash your hands frequently.”

In the U.K., the new variant has put a substantial toll on hospitals, and prompted a third national lockdown.

Georgia ranked ninth in the rate of new COVID-19 cases nationally for the seven days that ended Friday, up from 11th a week earlier, according to the White House Coronavirus Task Force. Georgia also ranked fifth worst for new hospital admissions per 100 beds after ranking seventh a week before.

The task force, in its latest report dated Sunday, said the U.K. strain or possibly a unique American variant may have evolved here given the prolific recent spread of COVID-19, which is double the rate of the spring and summer surge.

“This acceleration suggests there may be a USA variant that has evolved here, in addition to the UK variant that is already spreading in our communities and may be 50% more transmissible,” the White House report said. “Aggressive mitigation must be used to match a more aggressive virus.”

Hospitals across the U.S., including in Georgia, are seeing record numbers of COVID-19 patients. The state reopened its field hospital at the Georgia World Congress Center last week, and it had 14 patients at noon Tuesday with plans to increase capacity to 60 staffed beds by Friday, officials said.

The Centers for Disease Control and Prevention has urged states to screen coronavirus test samples for the variant, which has been found in at least five states, including California, New York and Colorado.

But the new strain has likely spread to many more states.

DPH started testing for the strain this week, and the first case was found from a specimen collected at a pharmacy processed by a commercial lab. Not all patient swabs will be screened for the U.K. variant, but DPH said in an email Monday it is establishing a sampling scheme for surveillance.

But the discovery of the U.K. variant in Georgia comes as some local health departments are diverting personnel and resources from testing to administering vaccines. Last week, the state announced it would broaden eligibility for inoculations to more first responders and people 65 and older.

DeKalb County’s Board of Health on Tuesday announced that it would suspend testing through the weekend to concentrate on vaccinating health care workers. The scuttled days of testing would cancel 2,750 slots, though not all had been filled, a spokesman said.

“There is testing available in dozens of places in this county,” said Dr. S. Elizabeth Ford, DeKalb County’s district director for public, who made the decision. “While we have had a huge presence in the testing world since the onset of COVID-19, based on our more emergent need to immunize our health care providers, our first responders and our long term care facility residents, that right now is priority one for us.”

She said the county testing would be centralized in one site after the weekend.

Though the moves are expected to free up scarce resources to administer shots to vulnerable groups, diminished testing risks clouding health leaders’ vision of the spread of the disease, critics said.

“Do not delay the rapid immunization of those over 65 and vulnerable to severe disease,” the task force said.

“No vaccines should be in freezers but should instead be put in arms now; active and aggressive immunization … would save lives,” the report said.

Dr. Harry J. Heiman, a clinical associate professor at the Georgia State University School of Public Health, said shifting resources away from testing was a “failed strategy” and urged health agencies to multi-task.

“This is especially true given the unprecedented surge in cases and hospitalizations we are seeing,” Heiman said. “The presence of the new COVID variant, which appears to be more contagious, only underlines the importance of utilizing all of the public health policy tools at our disposal. These include a mask mandate, closing bars and nightclubs, enforcing stricter guidelines for indoor dining and group gatherings.”

As of 2:30 p.m. Tuesday, 5,278 patients at Georgia hospitals had COVID-19, a new daily record. Nearly a third of all hospitalized patients in Georgia have COVID-19 and more than 90% of the state’s intensive care beds are occupied as the coronavirus rips through the state.

Coronavirus patients made up 20% or more of total patients in each of the state’s 14 hospital regions, and 35% or more in eight regions, with some as high as 42%.

Dozens of hospitals each day divert emergency room or intensive care cases to other facilities as they grapple not only with the surging coronavirus epidemic, but the car crashes, heart attacks and other emergency conditions that happen every day.

Dr. Robert Jansen, chief medical officer of Grady Health System, was informed of the Georgia discovery of the U.K. variant by an Atlanta Journal-Constitution reporter when the news broke during an interview.

“It’s frightening. When you see what is happening, it is more infectious…you’ll have more people coming to the hospital,” he said.

When Jansen arrived at Grady on Tuesday morning, the hospital had about 50 or 60 patients in need of a hospital room who were waiting in the emergency room because the hospital was full.

“I don’t know of any hospital in the region that isn’t under stress right now because of the capacity issues that we’re facing,” he said.

Board of Health to Suspend COVID-19 Testing Through Saturday