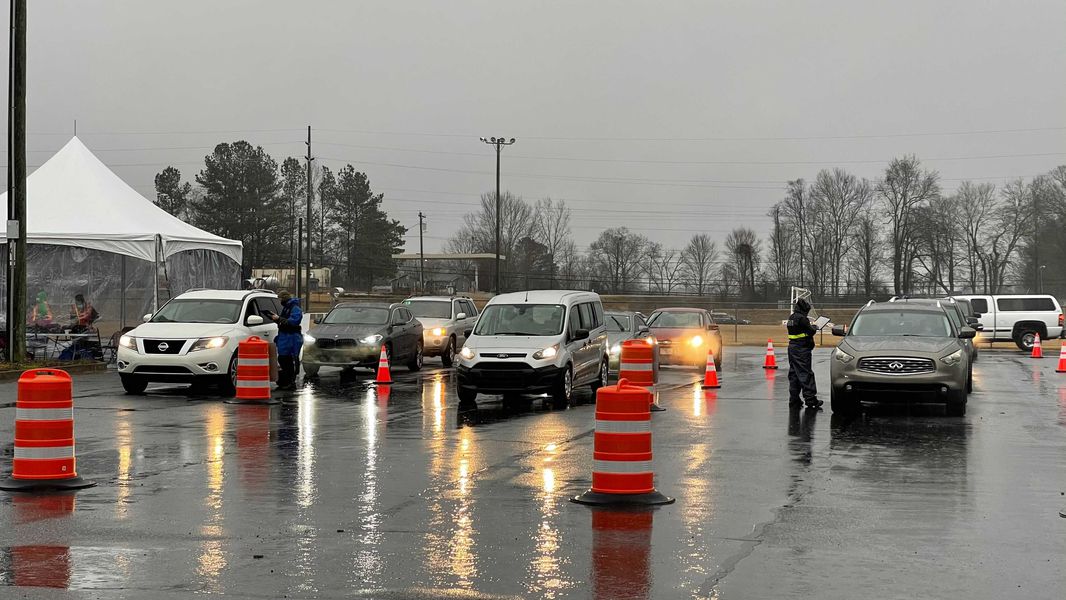 People line up in their cars at the newly opened Clarkesville mass vaccination site, waiting for workers to screen them before receiving their vaccines on Feb. 22, 2021. (Tyler Wilkins/AJC)

Georgians lined up in their cars before 8 a.m. Monday as the first four state-run sites opened to speed delivery of the COVID-19 vaccine to at-risk residents.

The four sites are located at the Delta Flight Museum outside Hartsfield-Jackson International Airport, the Albany Georgia Forestry Commission in southwest Georgia, the Habersham County Fairgrounds in Clarkesville and the Macon Farmers Market.

At a press conference Monday morning to promote the new sites, state officials said the Atlanta, Habersham County and Macon locations were booked for the week but had appointments available next week and beyond. Only about 200 of more than 1,000 appointments at the Albany location have been reserved.

Gov. Brian Kemp said the sites were built with a “great range of flexibility” in case they need to move to a new location, expand or reduce capacity.

“They are all saying if we had more doses we can expand,” said Kemp. “We just need that supply from the federal government, and when we do that, we can expand not only our sites but also other sites around the state.”

Kemp said more than 1.75 million doses of coronavirus vaccine have been administered in Georgia, accounting for about 89% of the state’s supply. He said as supply expands, the state will be able to scale up the four mass vaccination sites and add more locations.

Within the next few days, the governor also plans to expand who can get the vaccine, a group that now includes people over 65, first-responders and caregivers to the elderly.

James Stallings, director of the Georgia Emergency Management Agency, said officials are working through minor “hiccups” in the opening of the sites. Behind him, live footage showed workers beginning to dole out the vaccine to people in a line of cars at one of the drive-in sites.

Kemp said 85% of deaths from COVID-19 have been in the population age 65 and over and that seniors continue to be the urgent focus of the vaccination program.

Drivers at the Delta Flight Museum said they were grateful for the location opening up after their failed attempts to get the vaccine elsewhere.

Officials greeting drivers outside the gates wouldn’t allow media inside.

Larry Thomas, 71, said he was turned away after walking from his home about five blocks away.  Thomas said he heard on the television news this morning that walk-ins would be allowed vaccines.  Thomas said he has a scheduled appointment at the site for Thursday.

“I’m very concerned,” Thomas said about being able to get the vaccine. “I was on standby at Kroger. They’re waiting on more vaccines.”

Nicole Gaines, a Delta flight attendant, of Powder Springs, arrived with her mother Rhonda Robinson, 68, who said she’s been on a waitlist with her doctor’s office at Piedmont Hospital.

In Clarkesville, workers steadily screened drivers through eight lanes at the Habersham County Fairgrounds. After answering a few questions from their cars, people were directed to park and sent up a hill to get their vaccines in a building.

To register to get the vaccine at one of the state’s sites, those who are eligible to receive the vaccine as part of the first phase can pre-register for an appointment and those currently ineligible can sign up for information about when they can get the vaccine at https://myvaccinegeorgia.com/.