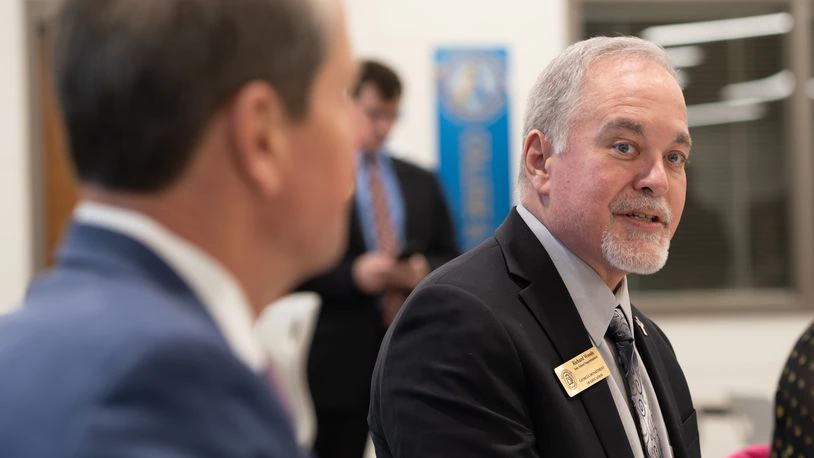 State School Superintendent Richard Woods reprimanded the DeKalb County Board of Education over the conditions at Druid Hills High School. Now the district is required to modernize the school if it wants access to millions of dollars in reimbursements for districtwide construction costs. (Ben Gray/AJC)

If the DeKalb County School District wants access to millions of dollars from the state to offset districtwide building costs, it must commit to modernizing Druid Hills High, according to a new directive from the Georgia Department of Education.

The department’s 21-page corrective action plan issued Thursday upholds an earlier pledge from Georgia School Superintendent Richard Woods and ties the future of dozens of projects in the district to one aging high school.

Georgia’s Board of Education must approve the district’s five-year facilities plan before it can be reimbursed for any construction costs. The DeKalb school board approved its plan earlier this week, but it did not include the modernization of Druid Hills High.

That was the third time the school board opted not to modernize the school.

Woods called conditions at Druid Hills High “egregious” after a team of state officials visited and evaluated the campus. He said in a letter to the board in April he would not recommend the facilities plan for approval if the Druid Hills problems were not addressed.

The corrective action plan issued this week centers on updates to the school. In addition to committing to a modernization estimated to cost $60 million, the district must send weekly updates to the state about improvements at Druid Hills High. The plan outlines more than 70 immediate needs at the school. They range from painting over graffiti to repairing roof leaks, and addressing plumbing and electrical problems.

“A good-faith effort to implement these recommendations and address the issues identified is a pre-condition for approval of the district’s facilities plan,” the state Department of Education’s notice said.

The DeKalb school board blamed Cheryl Watson-Harris for conditions at the school in a response to Woods’ first communication about the school. She was fired from her role as superintendent later that same day. Woods answered back that the board was eroding public trust and is responsible for conditions at schools.

“It was clear … regular maintenance has been largely neglected,” the corrective action plan said.

The school board’s decision not to modernize Druid Hills High went against the district’s 10-year master. The district spent $2 million and more than a year on the plan, which took into consideration the state of the district’s facilities, projected enrollment and community input. Instead, the board wanted to focus on critical updates at all schools.

The state said to do both.

In addition to the Druid Hills fixes, the corrective action plan tells the district to complete a safety assessment of all campuses and treat those findings as top priorities. It requires the district to proceed with plans to modernize Cross Keys High School. And it recommends internal changes to the facilities and maintenance departments, including the possibility of hiring more workers.

Board member Marshall Orson, who has long been an advocate for modernizing Druid Hills High, said on his Facebook page that the corrective action plan isn’t a guarantee. The board could ignore the state.

“We can only hope this directive will finally tip the Board to making the right decision for Druid Hills,” he wrote. 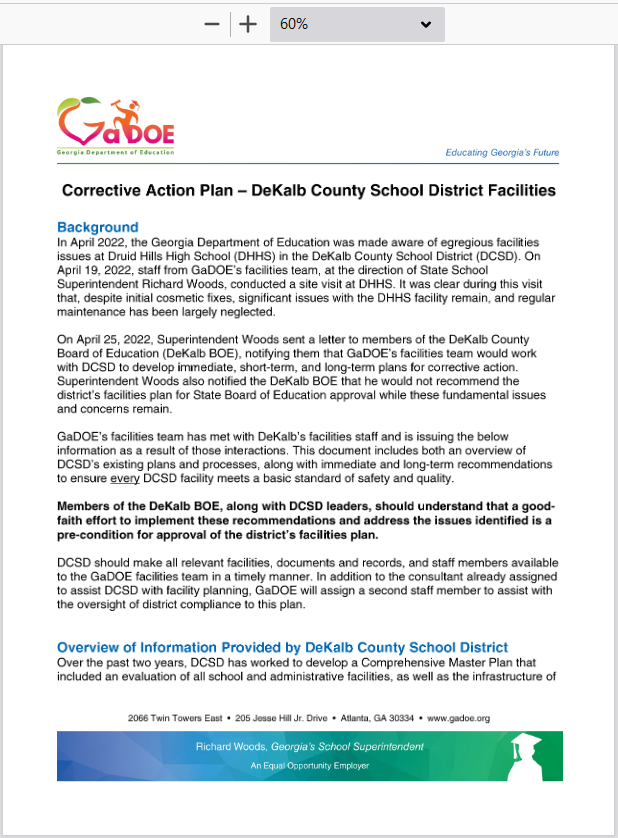