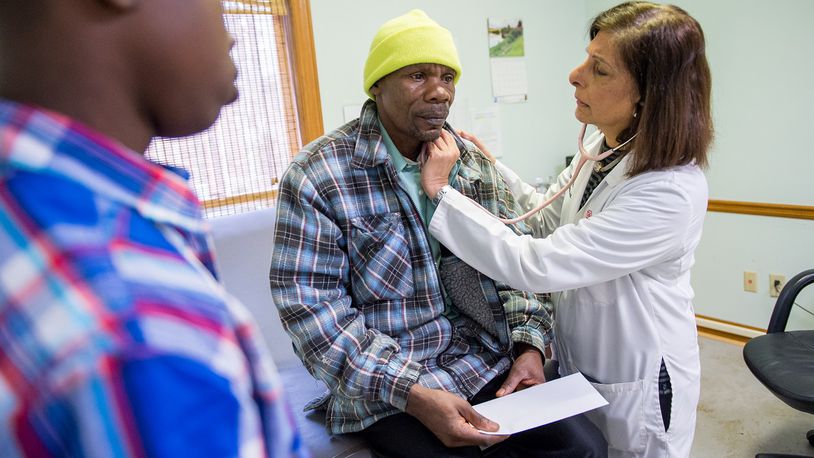 Dr. Gulshan Harjee, right, examines Simeon Gahungu, who is from Burundi and who came to the U.S. as a refugee form Tanzania, at the Clarkston Community Health Center on Dec. 17, 2017. Harjee co-founded the clinic to serve refugees, immigrants and other uninsured people. At left is Gahungu’s son Matias Manirakiza, 17. BITA HONARVAR/SPECIAL

Since it opened in 2015, the Clarkston Community Health Center has attracted long lines of impoverished patients, at times becoming so busy that it has been forced turn some away.

The volunteer-run nonprofit has provided free care to more than 5,500 immigrants, refugees and U.S.-born people without health insurance. Some have traveled from Alabama, South Carolina and Tennessee.

Now that it has outgrown its 2,200-square-foot building in downtown Clarkston, the center is seeking to relocate and expand. Those plans got a big boost this week when a Texas philanthropist pledged $2.5 million for the effort. With that support, the center is preparing to build a much larger medical center just south of Clarkston at 4038 Rockbridge Road Southwest.

The news comes at critical time for refugees who are fleeing armed conflicts and humanitarian crises abroad and for others who are sick or struggling financially amid the coronavirus pandemic. Georgia — which has the nation’s third-highest rate of uninsured people — is among 12 states that have not expanded Medicaid under the Affordable Care Act to all poor adults.

“People were lining up at 6 a.m. outside our clinic, and this was pre-COVID,” said Saeed Raees, the CEO and one of the co-founders of the clinic, which also provides dental care and operates a free pharmacy. “We need to grow because there is such a high need out there.”

In May 2020, DeKalb commissioners modified zoning conditions to allow for the new clinic. The next day, Raees’ center bought the 2.5-acre site for $360,000 from the Masjid Rahman Islamic Center.

Two vacant houses on the site must be demolished to make way for the clinic, Raees said. His center intends to seek a land disturbance permit to move forward with the project and hopes for the new clinic to begin operating by the end of next year.

A floor plan for the multimillion dollar project shows numerous medical and dental examination rooms, a dental lab, a teaching kitchen and a pharmacy. Medical students and other volunteers will continue getting hands-on experience at the clinic, with serves patients who speak more than 30 languages and who are from more than 20 countries.

Dilshad Dhanani of Duluth is among the hundreds of people who have volunteered at the center.

“I have found true contentment results from contributing in any way to the wellbeing of others,” she said.

Struck by what she has experienced at the clinic, she spoke about it with her brother, Shoukat Dhanani, whose family businesses operate hundreds of Popeyes and Burger King restaurants and other enterprises, generating about $2.8 billion in annual revenue. She also sent him articles about the center, including one published in The Atlanta Journal-Constitution about the perseverance of Dr. Gulshan Harjee, one of the clinic’s founders.

Shoukat Dhanani visited the clinic for the first time this month and then pledged $2.5 million for its relocation. He will be joining its board of directors. For him, the charity is in keeping with his Islamic faith and a way to honor his parents, Hasan Ali and Daulat, and stepmother, Zubeda.

“I am an immigrant also. I have been through a lot of what immigrants go through,” said Shoukat Dhanani, who came to America from Pakistan for college. “We are fortunate enough and we are blessed that we are in a position to help other immigrants. So why not?”

He added: “Overall, helping humanity — that is the main thing.”

The clinic’s relocation and expansion has attracted support from DeKalb commissioners, including Ted Terry and Lorraine Cochran-Johnson.

“I am a huge advocate for the services they provide,” said Cochran-Johnson, who has visited the center and has helped fund it. “I feel they are honestly in many ways unknown by many residents of DeKalb County. And as a commissioner I have just sort of been on my own crusade to ensure that people are aware of this resource.”

“We need more health care in our community,” he said. “Having that medical center in the community gives great access to a lot of people.”

The clinic is seeking volunteers and donations so it can expand its services. Those interested can learn more at clarkstonhealth.org.

DeKalb Department of Innovation & Technology Ranked No. 2 in Nation