The bill, which Gov. Ron DeSantis is expected to sign, is the latest Republican effort to restrict voting after the 2020 election. It will make Florida the first major swing state won by Donald Trump to pass such a law. 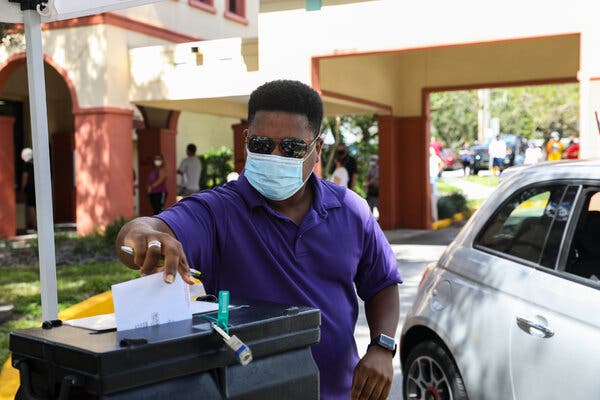 Florida’s new voting bill would sharply limit the use of drop boxes, which many voters used to return absentee ballots in last year’s elections. Credit…Eve Edelheit for The New York Times

By Patricia Mazzei and Nick Corasaniti

MIAMI — Republicans in the Florida Legislature passed an election overhaul bill on Thursday that is set to usher in a host of voting restrictions in one of the most critical battleground states in the country, adding to the national push by G.O.P. state lawmakers to reduce voting access.

The bill makes Florida the first major swing state won by former President Donald J. Trump to pass significant voting limits and reflects Republicans’ determination to reshape electoral systems even in states where they have been ascendant. Mr. Trump carried the state last year by more than three percentage points, other Republicans also performed strongly, and the party raised new hopes of its ability to appeal to Latino voters.

But Republicans in Florida argued that its elections needed to be more secure, despite the fact that voting unfolded smoothly in 2020 and arguments by Democrats and voting rights experts that some of the new measures would disproportionately affect voters of color. Now the state is on the verge of weakening key parts of an extensive voting infrastructure that was slowly constructed after the state’s chaotic 2000 election and was rapidly enlarged last year because of the coronavirus pandemic.

The new bill would limit the use of drop boxes; add more identification requirements for those requesting absentee ballots; require voters to request an absentee ballot for each election, rather than receive them automatically through an absentee voting list; limit who could collect and drop off ballots; and further empower partisan observers during the ballot-counting process. The legislation would also expand a current rule that prohibits outside groups from providing items “with the intent to influence” voters within a 150-foot radius of a polling location.

Gov. Ron DeSantis, a Republican, has indicated his support for the voting overhaul and is expected to sign it. The bill passed largely along a party-line vote in both chambers, 77 to 40 in the House and 23 to 17 in the Senate, though one Republican state senator, Jeff Brandes of St. Petersburg, voted against it.

The legislation follows a similar law passed recently by Georgia, and comes as Texas, Arizona and other states led by Republicans pursue limits on access to the ballot. G.O.P. lawmakers have been fueled by a party base that has largely embraced Mr. Trump’s false claims of widespread voter fraud and a stolen 2020 election. In Florida, Republican legislators promoted the voting bill while providing little evidence of any problems with fraud, and despite their continued claims that the state’s 2020 election was the “gold standard” for the country.

“There was no problem in Florida,” said Kara Gross, the legislative director and senior policy counsel for the American Civil Liberties Union of Florida. “Everything worked as it should. The only reason they’re doing this is to make it harder to vote.”

Once the bill is signed into law, Florida will become the first state to create new barriers to voting after businesses across the country embarked on a public pressure campaign to oppose such measures. Major corporations, after speaking out against voting bills in states like Georgia and Texas, remained largely muted on the Republican push in Florida.

Hovering over Florida’s debate about the bill was the state’s strong and exceptionally popular tradition of voting by mail — and a recent sea change in which party benefited most from it.

In the 2016 and 2018 elections, roughly a third of the state’s voters cast ballots through the mail. And in both years, more Republicans than Democrats voted by mail.

But in 2020, more than 2.1 million Democrats cast mail ballots, compared with roughly 1.4 million Republicans, largely because of a Democratic push to vote remotely amid the pandemic and Mr. Trump’s false attacks on the practice. (The former president and his family, however, voted by mail in Florida in the June 2020 primary.) 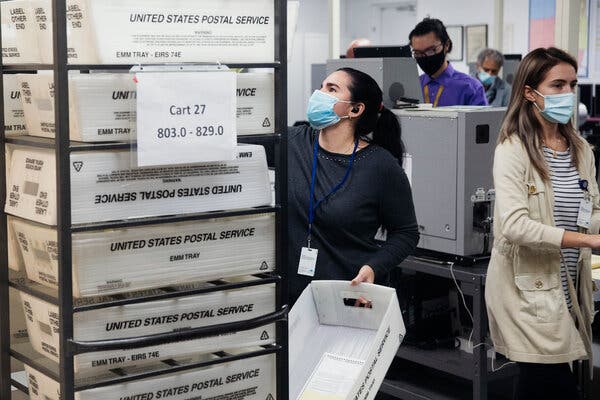 Florida has a popular tradition of voting by mail, a method that favored Republicans until 2020, when Democrats encouraged the practice during the pandemic.Credit…Scott McIntyre for The New York Times

Given that history in Florida, its bill will act as a unique test of the national Republican push to curtail voting access, especially absentee and mail voting. And the G.O.P. effort carries risks: Was the Democratic surge in mail balloting a sign of a new normal for the previously Republican-dominated voting method, or a blip caused by the extraordinary circumstances of the pandemic?

The legislation has already become something of a political balancing act, as state Republicans try to appease a Trump-friendly base hungry for new voting limits while not harming the party’s turnout. In 2022, the state is poised to yet again become a marquee political battleground as Senator Marco Rubio, a Republican, and Mr. DeSantis seek re-election.

Democrats in the Legislature seized on Republicans’ justification for the bill.

But Republicans defended the bill, saying that it was popular with “our constituents” and noting that voting options in Florida were still far more extensive than in other states. Florida will still have no-excuse absentee voting and will mandate at least eight days of early voting.

“If the opposition says that we are creating barriers to voting, those barriers already exist in other states,” said Blaise Ingoglia, a Republican state representative from Hernando County who helped lead the push for the bill. “But we never hear a peep from the opposition about those laws.”

Other Republican legislators echoed language used by Mr. Trump and his allies during their challenges to the 2020 election.

“I believe that every legal vote should count,” said Travis Hutson, a Republican senator from Northeast Florida. “I believe one fraudulent vote is one too many. And I’m trying to protect the sanctity of our elections.”

Data requested by lawmakers themselves suggested there was little need for the legislation. The Republican-led House Public Integrity and Elections Committee surveyed the state’s 67 election supervisors in February, asking them about past elections. Almost all of the supervisors responded and said that, over the past four years, they had reported very few instances of possible fraud — one of lawmakers’ stated reasons for pushing the legislation — and that most of their drop boxes were already monitored, through either physical or video surveillance, public records show.

“It seems like the Legislature is ignoring — I would say deliberately ignoring — the facts that they have in their possession,” said Stephen F. Rosenthal of Miami, who is part of a group of Democratic lawyers that requested the records. The group also queried elected state prosecutors about voter fraud, finding a minuscule number of prosecuted cases.

The supervisors’ answers to the House committee also revealed that election supervisors had received millions of dollars in grant funding from outside organizations in 2019 and 2020. That money will now be prohibited, with no obvious substitute for it in the future.

Republicans, when pressed for details on any reported fraud that would prompt the need for the bill, often demurred.

“I don’t know, but I’m sure it was going on,” Mr. Ingoglia responded to a question on the House floor about any reported instances of illegal ballot collection. “Just the fact that they weren’t caught doesn’t necessarily mean that it’s not happening.”

The bill was not without criticism from notable Republicans inside and outside the Legislature. D. Alan Hays, a conservative Republican who had previously served in the State Senate for 12 years and is now the election supervisor in Lake County, told his former colleagues at a legislative hearing last month that their bill was a “travesty.”