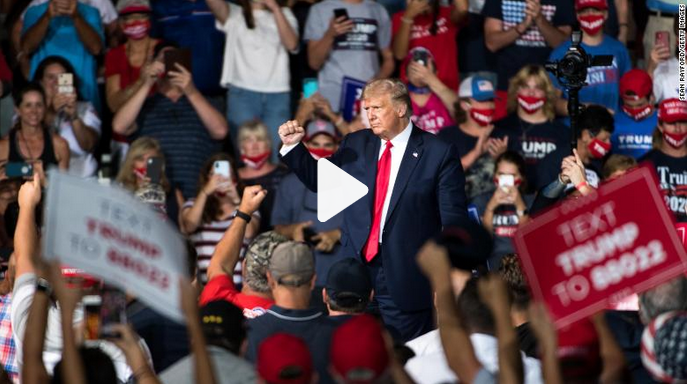 By Elizabeth Joseph and Devan Cole

Washington – (CNN)A federal judge has temporarily barred the US Postal Service from sending mailers containing what Colorado’s top election official calls “false statements” that may discourage voters from participating in the November election, according to court documents filed Saturday evening.

Unless extended by the court, the temporary restraining order remains in effect through September 22, the filings shows.

The pre-election mailers, meant to inform Americans about voting by mail, advise voters to request a vote-by-mail ballot at least 15 days before Election Day and to return the official ballot at least seven days before. Those guidelines, however, don’t align with Colorado’s election policies.

The lawsuit pointed to false statements, including telling voters they need to request a ballot, when in Colorado that isn’t the case. The state also pointed to the part of the mailer the tells voters to send in their ballots seven days in advance, when Colorado voters have the option to return their ballots in person on Election Day.

Griswold told CNN’s Fredricka Whitfield on “Newsroom” Sunday that she thinks the mailers are “suspect” based on President Donald Trump’s ongoing fight against widespread mail-in voting in the 2020 election.

“It very well could have started in a good place — making sure that voters have confidence in using the mail for voting — but I do think when we see the pattern of voter suppression coming out of the President in his use of the Post Office to try to suppress voters, I do think it’s suspect,” she said.

Griswold also said that despite the temporary win on Saturday, the state will continue with its underlying lawsuit against the mailers.

“We have an underlying lawsuit where we’re saying don’t send the postcards ever. So either way, you know, we’ll make sure that Colorado voters understand the correct information, but I just wish the Post Office wouldn’t have sent the notices in Colorado when we asked them on Friday,” she said.

The defendants — the United States Postal Service, Postmaster General Louis DeJoy, Denver, Colorado, Regional Postmaster Samarn Reed, Albuquerque and New Mexico Regional Postmaster Chris Yazzi — are ordered to file with the court an accounting of all notices sent across Colorado by the morning of September 17.

“This accounting will, at a minimum, include the number of such notices mailed to Colorado postal patrons broken down by the first three digits of the destination U.S. Postal Service Zip Code,” Judge William J. Martinez said in court documents filed Saturday evening.

The suit notes that Colorado “understands that some voters in limited areas of Colorado may have received this official notice, or may receive it on Saturday, September 12.”

Griswold previously asked USPS to not send the pre-election mailers to voters in her state as to not cause confusion. In a Friday tweet, Griswold also said that secretaries of state had asked DeJoy for a preview of the mailing but he refused.

“Secretaries of State asked @USPS Postmaster General DeJoy to review a draft before election information was sent to voters to ensure accuracy. But he refused. Now millions of postcards with misinformation are printed & being mailed to voters,” Griswold said.

USPS spokesman Dave Partenheimer told CNN on Saturday that “the mail-piece — which has already been delivered to most households and will reach every American residential mailing and P.O. Box address in the coming week — contains a single set of simple recommendations for voters throughout the nation, regardless of where they live and where they vote.”

“The main message of the mail-piece is that voters should plan ahead, educate themselves about voting options available in their jurisdiction, and, if they choose to vote by mail, to give themselves enough time to receive, complete and return their ballot,” he said.

This story has been updated with additional comments from Colorado Secretary of State Jena Griswold.

Read the original story on CNN.com.