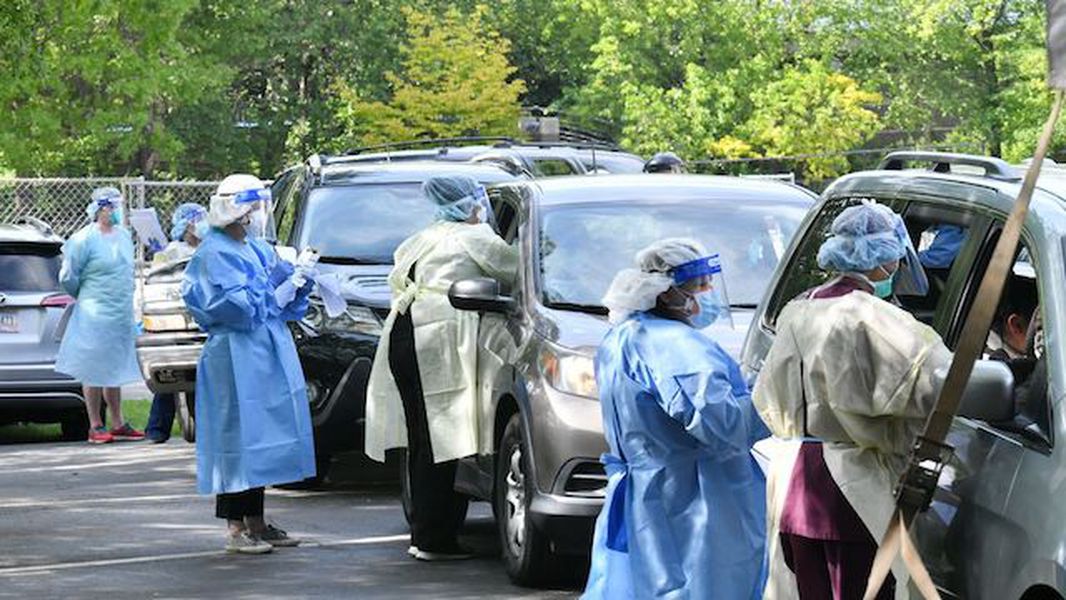 ‘We need to have more testing capability,’ says one Georgia expert.

The summer surge in new coronavirus cases exposed the shortcomings in the nation’s infrastructure to detect active cases of COVID-19 and quickly isolate the infected from the well.

Testing centers and labs were swamped. It took days for many in Georgia and other states to get tested and sometimes a week or two — or even longer — to get results, by which time an infected person could have sickened many others.

The testing shortcomings are placing new urgency on mass producing so-called antigen tests and other rapid tests that can cheaply deliver results in minutes while someone waits. Such speed might allow a high school student to be isolated and sent home before he or she even entered a classroom, or identify a worker before he or she came in contact with customers or colleagues. No appointments. No driving to a testing facility. And no waiting.

But there is a tradeoff: so far antigen tests are less accurate than the gold standard of tests known as reverse-transcription polymerase chain reaction, or PCR, tests. Georgia health officials consider a positive antigen test a “probable,” not a “confirmed,” coronavirus case and do not include them in the state’s tally of coronavirus cases.

More testing will be vital as the U.S. heads into fall and winter, experts warn, especially as schools continue to open, flu season starts and people spend more time indoors where the coronavirus more easily spreads.

One study by researchers at the Duke University Margolis Center for Health Policy estimated the nation might need 200 million tests per month, centered around schools and long-term care facilities, if spread continues at current levels. This is about eight times the total amount of testing that the U.S. reported in August.

The Margolis Center report, which was supported by the Rockefeller Foundation, said with new tests coming to market and better federal coordination, the U.S. could reach that 200 million tests per month figure by January, with resources dedicated to screening high-risk areas such as long-term care facilities, schools and colleges.

Testing coupled with contact tracing is how public health agencies identify cases and isolate people to stop outbreaks. Test results are needed within 48 hours to effectively isolate patients before they can spread germs to others, experts say.

In August, the federal government announced it purchased testing supplies for 14,000 nursing homes and long-term care facilities. The government also announced more than $760 million for the purchase of 150 million test through an Abbott antigen point of care system called BinaxNOW for schools and other “special needs populations.”

Nancy Nydam, a spokeswoman for the Georgia Department of Public Health (DPH), said it is unclear when and how many of the BinaxNOW units DPH will receive or when the devices will arrive.

Dr. Kathleen Toomey, the state’s public health commissioner, said in a recent interview the state is evaluating how best to deploy antigen tests in schools and long-term care facilities as they come available.

“As their sensitivity and specificity improves, we will be looking at that because clearly the more rapidly you can get a test back the more quickly we can offer intervention,” she said.

The molecular PCR test, the most widely used coronavirus test, detects viral RNA from a swab of the nasal passages or a saliva sample. To date, a PCR positive is the only test used to confirm a COVID-19 diagnosis.

Many of the machines used to process these tests can run hundreds or even 1,000 samples at a time, and the results are accurate. But PCR testing is also very costly.

The onslaught of infections early in the pandemic and again in the summer showed the limits of PCR testing capacity. The U.S. initially faced shortages of swabs to collect samples, the solutions to transport samples and chemical reagents to process tests.

Supplies of reagents and lab capacity were quickly swamped again this summer, meaning people waited days or weeks for results, and if they were positive, they likely were not still infectious.

“PCR will still be the gold standard to confirm a diagnosis,” said Justin Bellante, CEO of BioIQ, a Georgia technology company that helps employers source testing. “Right now, it’s like building a house and all you have is a screwdriver. You can do it but it’s not the best way to do it. You want a series of tools.” 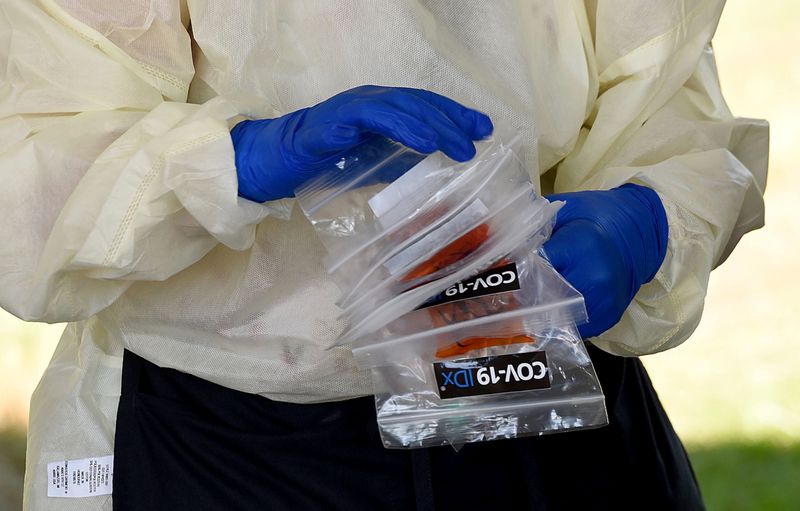 Since the start of the pandemic, the National Institutes of Health has invested hundreds of millions in grants to seed development to improve and expand testing.

In addition to molecular PCR tests, a new wave of antigen tests has hit the market or are under development. These tests detect certain proteins in the virus. Antigen tests also can use nasal or saliva samples which are processed in a reader at the point of care.

So far in Georgia, some 56,000 antigen tests have been conducted, reporting about 16,000 probable positive cases of COVID-19, according to DPH. These 16,000 cases are not yet reported in Georgia’s case numbers because they are considered probable cases, not confirmed cases, and it is not clear how many people with positive antigen tests also received positive PCR tests that would be reflected in Georgia’s totals.

Through Thursday, Georgia has reported more than 2.5 million PCR tests, and about 290,000 confirmed cases.

Other rapid testing technologies that are under development and undergoing trials, which are similar to home pregnancy test, also hold promise for mass screening.

What is lost in sensitivity in each of these non-molecular PCR tests is made up for with speed. These less-sensitive tests tend to deliver results within minutes and are cheaper, making them a less expensive option for mass screening.

Mass screening is important because some 30% to 60% of people with the coronavirus may not show symptoms, according to the Duke Margolis study, but these so-called “silent spreaders” can still transmit the virus.

The Atlanta Journal-Constitution spoke to more than a half-dozen public health and testing experts. While each had different visions for what a model testing regimen in the nation and in Georgia might look like, all said broader testing and more testing types are needed.

“Right now, it’s like building a house and all you have is a screwdriver. You can do it but it’s not the best way to do it. You want a series of tools.”
– Justin Bellante, CEO of BioIQ

These include improving the capacity of molecular PCR tests and procedures to make this form of testing more efficient.

The good news is new tests are starting to hit the market or are expected to receive emergency use authorization in the months ahead. The bad news is if another major surge occurs in the next few months, molecular PCR testing might be swamped again until it can be relieved by greater capacity.

Dr. Godbey, the CAP president, is the laboratory director for Southeastern Pathology Associates and Southeast Georgia Health System, in Brunswick, along the Georgia coast. He said PCR testing remains the most reliable form of testing.

But for every test his lab processes, he said he has to send two samples to national reference labs like Quest or LabCorp because there still aren’t enough reagents for local labs to process tests.

Local testing is best because it cuts down on turnaround time when test centers don’t have to ship samples to other states to process. Furthermore, a recent CAP survey found three-quarters of its members provide COVID-19 testing, and 70% have capacity to do more.

But nearly two-thirds of lab directors in the June survey said have had trouble acquiring enough reagents, and the majority say they’ve had trouble obtaining swabs and transport solutions for samples.

Georgia Gov. Brian Kemp is reflected in a mirror as he speaks during a stop on his fly-around tour to encourage Georgians to stop the spread of COVID-19 in Augusta, Ga., Friday, Sept. 4, 2020. [Michael Holahan/The Augusta Chronicle via AP)

The U.S. initially stumbled out of the gate with testing. A CDC-derived test failed, and the nation was quickly swamped with cases and not enough tests.

In Georgia and many states, testing for the coronavirus was rationed initially for first responders, health workers, the very sick and most vulnerable people who live in congregant settings.

In April, Georgia began to test anyone who sought a test. As the state reopened over the late spring and summer, demand surged as cases climbed.

Now that new cases have declined from their July peak, the state has faced a new challenge — falling demand. Georgia reported more than 201,000 tests the first week of August, its peak week of testing, but only about 148,000 the week of Aug. 30, a decline of more than 25%.

On Thursday, Gov. Brian Kemp and Dr. Toomey urged Georgians to get tested, particularly if they attended large social gatherings over the Labor Day weekend.

Local and state public health officials also have had to contend with mixed messages. President Donald Trump has derided testing for making the nation look bad. The CDC quietly in August released new guidelines to exclude people who don’t have COVID-19 symptoms. People who have been exposed to someone with COVID-19, the CDC’s updated guidance said, also don’t necessarily need to get tested, with exceptions for vulnerable people.

The move triggered a firestorm among public health experts, who said such guidance could make the epidemic worse. Georgia continues to test asymptomatic people.

The lack of a coordinated strategy and confusing information has hampered U.S. testing from the start, said Brian Castrucci, president and CEO of the deBeaumont Foundation, a Maryland-based nonprofit that supports public health agencies.

“We’re talking about testing like it’s a strategy. But it’s a tactic,” he said. “We are seven months in, and we have no national strategy.”

Much of the decision-making and sourcing has been left to states when the federal government and its vast resources and buying power should have taken the lead role, he said.