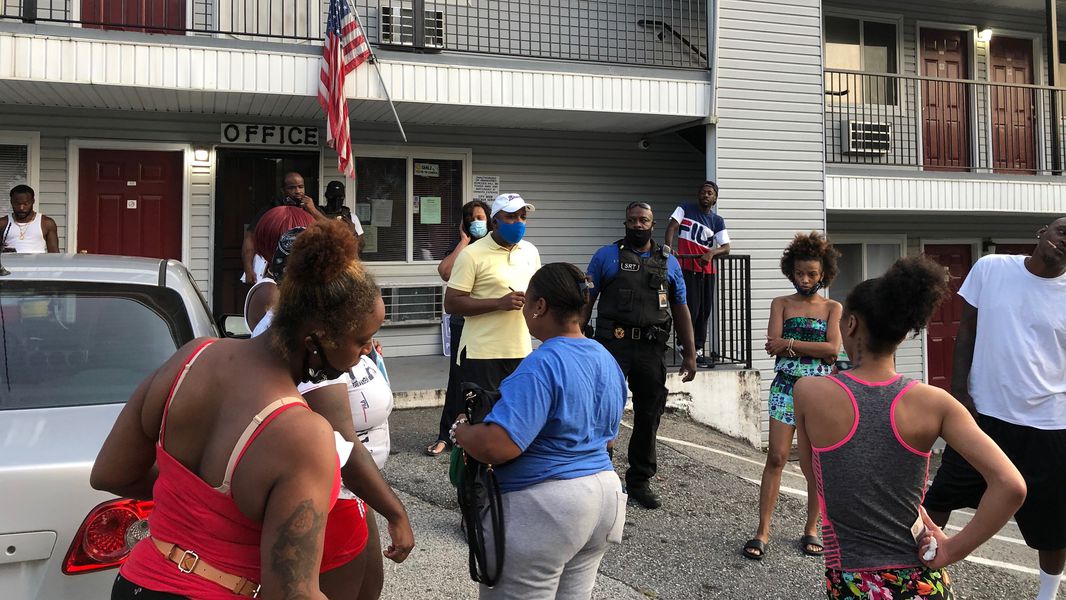 Residents stand outside the Efficiency Lodge in south DeKalb County on Tuesday.

‘It was the worst feeling ever, not knowing where you’re going to go,’ one resident said.

Fredericca Smith has already been through a lot in her life. At just 29 years old, she has overcome homelessness, working to get back on her feet with a job at a local warehouse. When the coronavirus pandemic hit, she again fell on hard times when she lost that job.

But this Tuesday was the worst day of her life.

Smith was told she immediately had to move out of the extended stay motel she’s called home for six months — in the middle of a pandemic — along with 10 to 15 other families who were behind on weekly rent payments, she said.

Some housing advocates and lawyers say the evictions of Smith and others at the Efficiency Lodge in south DeKalb County were unlawful. Because the residents have lived there for several months, they have the same rights as tenants in apartments or houses and therefore cannot be kicked out of their homes without a formal court eviction process, according to the Atlanta Legal Aid Society and the Housing Justice League.

“It was the worst feeling ever, not knowing where you’re going to go, out in the hot sun,” Smith said. “You’re not just supposed to kick us out.”

Low-income families who live in cramped hotel rooms across metro Atlanta often are on the brink of homelessness. Social agencies said more longtime hotel residents are being threatened with immediate eviction since coronavirus arrived. Though it is not explicitly spelled out in the law, lawyers have made the case that they cannot and should not be immediately removed from their rooms — especially during a pandemic when their health can depend on having a place to shelter.

“This was the first time that I’ve seen a mass eviction of this many people from one complex,” said Lindsey Siegel, a lawyer with Atlanta Legal Aid.

A woman who answered Efficiency Lodge’s corporate phone number Thursday said, “We have no comment” when contacted by an Atlanta Journal-Constitution reporter. 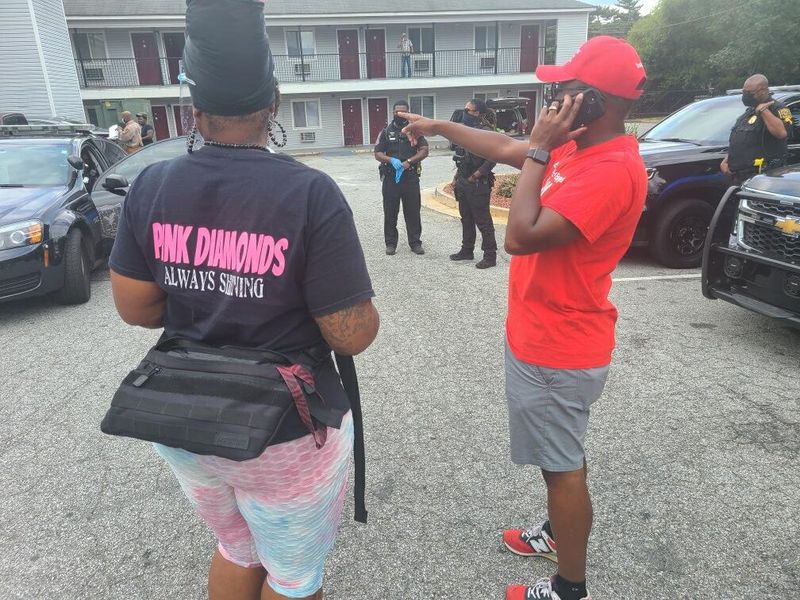 DeKalb Commissioner Larry Johnson (right) was at the motel as residents were told to leave their rooms.

The sudden removal of the residents from the Efficiency Lodge on Flat Shoals Road brought housing activists, police and a DeKalb County commissioner to the parking lot of the motel as the sun was setting Tuesday. Residents said the motel used armed security to tell people who were behind on rent payments that they had to leave, and locked some people out of their rooms while they were away at work.

“I sat there and argued and told them that they can’t do this,” Smith said. She has been out of work for several months and fell behind on rent payments while waiting for unemployment benefits to come through. They have still not arrived, she said, but she recently got hired working in a cafeteria at Georgia Tech.

DeKalb Commissioner Larry Johnson, who represents the area where the motel is located, said he saw some young children standing around the parking lot with their families Tuesday after they were told to move out. Many had lived there for several months.

“I understand they need their money, but you don’t need to be heartless,” Johnson said, referencing the motel’s management. “It really hurt me, to be in that situation and see those families.”

New Life Church, which is located around the corner from the Efficiency Lodge in Panthersville, ended up working with Johnson’s office to provide funding for 10 of the families to stay for five nights at another nearby hotel. The county is now working to connect them with more permanent housing and financial resources, Johnson said.

“We are getting some kind of help,” Smith said. “They said they have a plan for us for when we get out the hotel for the long term.”

Siegel said Legal Aid has met with some of the families and is looking into the issue, though it is too early to say if any legal action could follow.

Legal Aid and other tenant organizers say people who have lived in a motel for over three months have the same rights as renters in apartments, because the law eliminates the occupancy tax after 90 consecutive days. Once the motel is not paying that tax, those people are no longer guests, they are tenants, Siegel said. That would mean the motel must go to court to file a formal eviction notice.

No state judge has issued a ruling on this specific issue, Siegel said, adding that similar cases have been resolved before they reached court.

But the Georgia Department of Law’s Consumer Protection Division seems to support Legal Aid’s thinking. In an article posted on its website in April, the agency said that if a long-term tenant is evicted before a judge rules on the case, “the hotel may be potentially in violation of Georgia landlord-tenant law if it is later determined by a court that the hotel guest had the rights of a tenant.”

Last week, the federal government issued a moratorium on evictions for low-income renters who meet certain criteria. However, that order states it does not apply to people in hotels or motels.

Across metro Atlanta, up to 30,000 working families live in hotels, social agencies and local officials have said.

The pandemic put many of them out of work, he said, adding, “Every single person, this is kind of their last stop on their very tortured and tragic housing journey.”