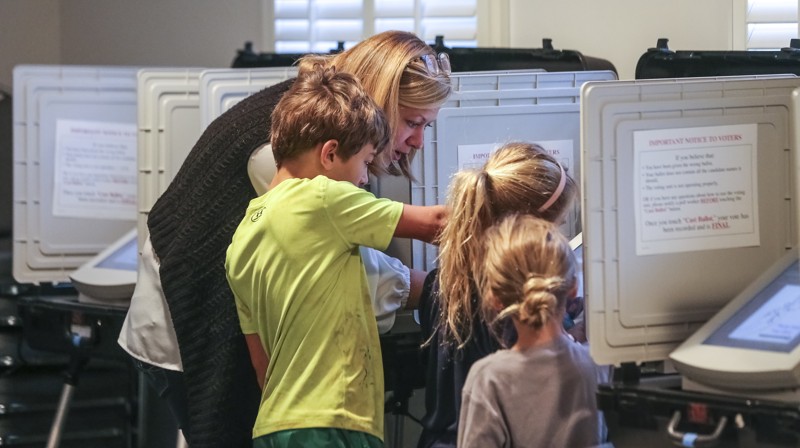 Sarah Jones votes with her children at The Gathering at the Church at Decatur Heights polling place on Tuesday, Nov. 5, 2019. Photo: John Spink/jspink@ajc.com

By Tia Mitchell and J.D. Capelouto

DeKalb voters rejected a slate of revisions to the county’s ethics laws, siding with critics who said the changes would have weakened ethics oversight.

With the referendum voted down, DeKalb’s ethics board will effectively remain dormant, while state lawmakers are expected to take up the issue again in the 2020 legislative session.

Critics say that is a better outcome than if voters had approved changes like removing the position of ethics officer and replacing it with a person who was more clerical in nature. The changes also would have required county employees to turn to the human resources department first if they had an ethics complaint.

The DeKalb Citizens Advisory Council issued a press release late Tuesday night praising voters for rejecting a proposal the organization described as “flawed” and “over-reaching.” The group spent the past three months campaigning against the changes.

“We have proven that it is important to be informed about what is on your ballot,” Chairman Mary Hinkel said in the release. “That words matter. That every vote counts. And, that citizen engagement is fundamental to our democracy.”

Members of the General Assembly representing DeKalb County will now have to go back to the drawing board. Last year’s Georgia Supreme Court ruling requires them to change the law to ensure only elected officials appoint members to the ethics board.

Sen. Emanuel Jones, D-Decatur, introduced a bill during the 2019 session that did just that. But his Senate Bill 7 went through a drastic revision that ultimately divided DeKalb delegation members.

Some agreed with the changes, and others said they didn’t like everything they read but felt it was best to compromise so the ethics board can get back to work. But there was also a faction of DeKalb legislators who were vehemently opposed to the final version of Senate Bill 7 and encouraged constituents to reject it. They said it would roll back ethics reforms voters passed overwhelmingly in 2015.

State Rep. Matthew Wilson, D-Brookhaven, wrote in a tweet that the he hopes the legislative delegation representing DeKalb can pass a new ethics bill early in the 2020 session, in time for a referendum on the March presidential primary ballot. This time, Wilson said, lawmakers should only focus on changing the appointment process to the ethics board. 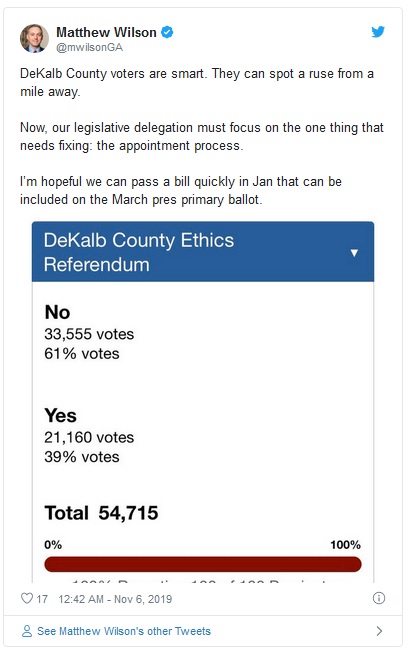 “DeKalb County voters are smart. They can spot a ruse from a mile away,” he wrote. Wilson was one of the lawmakers who urged his constituents to vote “no” on the referendum.

State Sen. Elena Parent, D-Decatur, said the delegation will get “back to work, but we need to continue to see the citizen engagement that led to the ballot measure’s defeat.” 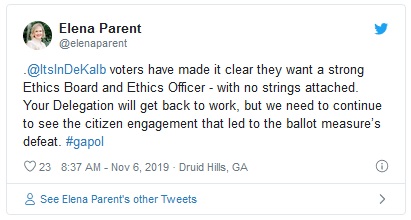 Jones cancelled town hall meetings in October after the first two of four he scheduled were packed with opponents of the ethics revisions. Some of his colleagues held the final two meetings without him.

“I am grateful to the voters for their thoughtful rejection of this bad ethics referendum,” she said Tuesday night. “They saw through the attempt to gut the strong ethics reforms they supported in 2015.”