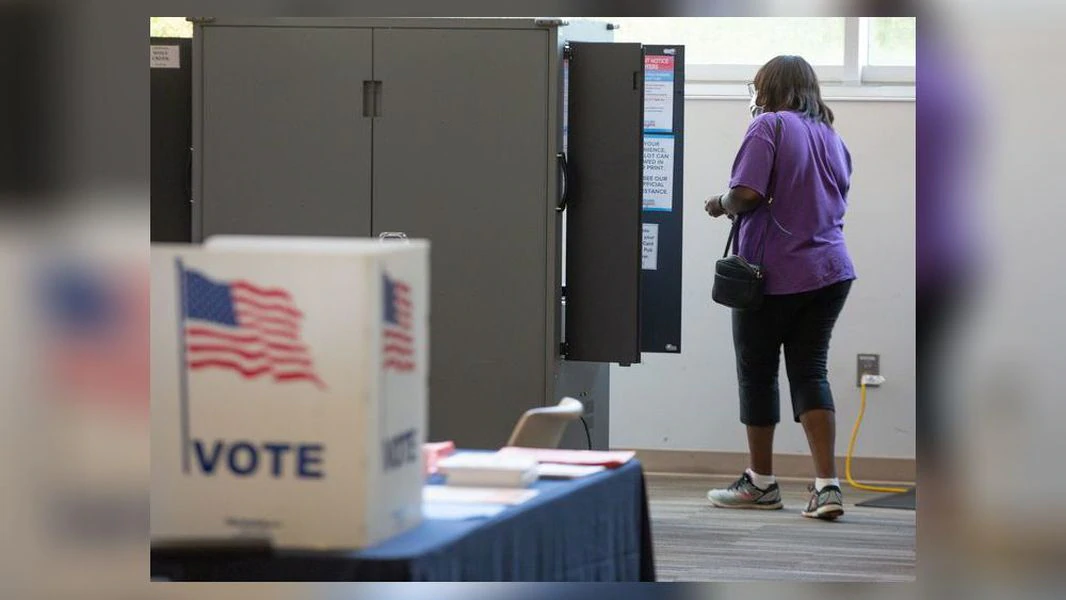 People vote at the Wolf Creek Library in South Fulton on Saturday, Aug. 1, 2020. STEVE SCHAEFER /SPECIAL TO THE AJC

Here is a look at some of the key contested races in metro Atlanta.

Residents should contact their local elections office if they have any questions about the complete ballot, or when, how and where to vote.

Visit ajc.com for the AJC’s comprehensive election coverage and results on election night.

In Atlanta, voters will decide a referendum that would create a new City of Atlanta homestead exemption that reduces by $30,000 the assessed value of homes located on land owned by a non-profit, known as a community land trust. The trusts have long-term (99+ year) leases with homeowners that require the homes to be sold at affordable prices. As with all other homestead exemptions, homeowners are required to apply for it.

Only one local issue: “Shall the Act be approved which provides a homestead exemption from City of Holly Springs ad valorem taxes for municipal purposes in the amount of up to $409,900.00 of the appraised value of the homestead for residents of that city who are 62 years of age or older?”

In heavily Democratic Clayton County, controversial Sheriff Victor Hill will face write in candidate Dwayne Fabian, a retired Georgia State Trooper. Hill is popular in Clayton County but has been criticized for his management of the sheriff’s office. Fabian says he would be a more transparent sheriff.

Sunday alcohol sales: “Shall the Clayton County Board of Commissioners be authorized to permit and regulate Sunday sales of distilled spirits or alcoholic beverages for beverage purposes by the drink from 11:00 A.M. to 1:00 P.M.”

Four-term Republican Sheriff Neil Warren is facing a challenge from Democrat Craig Owens, a major in the Cobb County Police Department. In the race for commission chairman, incumbent Republican Mike Boyce is seeking a second term against Democrat and District 4 Commissioner Lisa Cupid.

Board of Education Post 1: Republican Randy Scamihorn (i) vs. Democrat Vickie H.W. Benson

SPLOST: Voters will be asked whether to continue the 1% Special Purpose Local Option Sales Tax. If approved, the tax is expected to collect $750 million over a six-year period.

The most interesting local item may be the county’s second referendum on ethics legislation in as many years.

The new proposal eliminates ethics board appointments made by non-elected entities, which the Georgia Supreme Court deemed unconstitutional, and replaces them with appointments from DeKalb’s state House and Senate delegations. It also would maintain the county’s ethics officer position while adding a new administrative position, which supporters say would add balance when adjudicating complaints against county employees and officials.

Ethics question: “Shall the Act be approved which revises the Board of Ethics for DeKalb County?”

Democrats and Republicans continue their tug-of-war for control. Voters will settle two school board races and the contests for tax commissioner and clerk of Superior Court.

Also, on the ballot: “Shall the Act be approved that authorizes Douglas County to utilize tax allocation districts and redevelopment powers under the “Redevelopment Powers Law,” as it may be amended from time to time?”

Incumbents Barry Babb, the Republican sheriff, and Charles Oddo, the Republican District 3 commissioner, are hoping to keep their seats as they face Democratic challengers Chris Pigors and William Lightle respectively for the positions.

There are two contested county commission races in Fulton County.

In District 2 on the Northside, incumbent Republican Bob Ellis, elected in 2014, faces Democrat Justin Holsomback, who unsuccessfully ran to represent District 34 in the 2016 primary.

In District 4, which covers Fulton’s portion of the city of Atlanta, incumbent Democrat Natalie Hall, elected in 2014, is being challenged by Republican Barbara Gresham, a teacher who lives in Southwest Atlanta.

Gwinnett voters this fall will choose the majority of the board of commissioners, including a new chair. They will pick a new sheriff after Republican Butch Conway decided not to seek reelection, and will consider replacing the longtime District Attorney, Republican Danny Porter.

Hanging in the balance is the Republican-majority leadership, which has been in place for decades.

Transit expansion is again on the ballot, as is a sales tax renewal for schools.

The election could also bring major change to the Gwinnett County Board of Education, where Democrats are challenging two longtime Republican incumbents. The board could also become much more diverse; in each district up for a vote, there is a Black candidate on the ballot. Gwinnett’s first Black board member, Everton Blair, was elected just two years ago.

ESPLOST: The Gwinnett County Board of Education is seeking to extend a penny sales tax for education for five years. It would raise an estimated $985 million for land acquisition, technology and other infrastructure for schools. It would go into effect July 2022.

Gwinnett transit referendum: This penny sales tax would raise an estimated $12.2 billion over 30 years to pay for transit expansion in Gwinnett County. It would go into effect April 21.

Republicans are in charge here, and only one local election remains on the Nov. 3 ballot. Hall County voters pick two candidates to serve as supervisors for the Hall County Soil and Water Conservation District. Running are Todd Chapman, Michael Crow, and incumbent Mike Haynes.

Squaring off for the commission chairmanship are Republican incumbent Dave Carmichael and Democrat Taurus Madric-Morris.

Paulding voters are also being asked to decide on the proposed creation of a Paulding State Court.