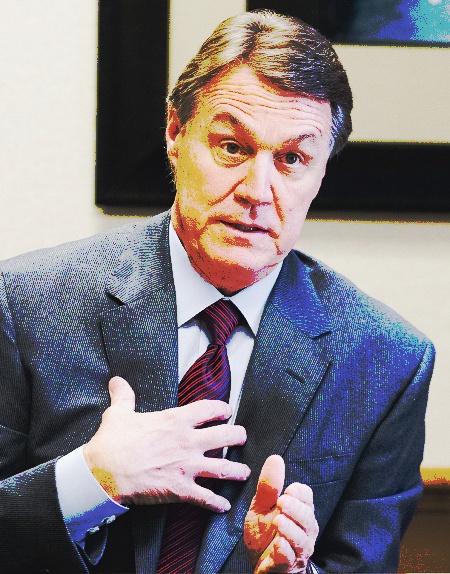 Georgia Sen. David Perdue is seeking reelection in a campaign that could determine control of the U.S. Senate. He’s doing so during a pandemic that has created hardship for ordinary workers, even as the wealthy have only become more so.

The Republican says that he can restore the economy to health and cites his record as a businessman who created jobs that “helped working families make it from payday to payday,” as his Senate website claims.

His longest-serving CEO gig, at Tennessee-based Dollar General, remains an integral part of his biographical arc. He tells crowds he added 2,600 stores in four years and over 20,000 jobs, as he did at a Cobb County Republican meeting in 2013.

Dollar General, which he ran between 2003 and 2007, rests on a business model of offering low-cost goods at rock-bottom prices while paying workers poorly. The stores, ubiquitous in low-income neighborhoods, are generally understaffed and have become magnets for crime, according to a recent investigation.

The corporate dictum that wages remain at 5% of gross sales “placed us at the bottom of a low-paying industry,” Cal Turner Jr., the son of Dollar General’s founder, told ProPublica.

Perdue presided over a more than 30-fold increase in the number of employee lawsuits filed against the company, according to a Capital & Main review of court filings. While he worked at the firm, 2,494 individual employment cases were filed charging the company with gender and racial discrimination, rampant wage theft, failure to provide medical leave and other workplace violations. In the four years leading up to Perdue taking the helm, 76 employment cases were filed in federal court.

That vast increase mostly appears due to more than 2,000 wage theft cases filed in 2006 by Dollar General managers who claimed they were classified as managers only so that the company could circumvent federal law, which required hourly employees to be paid overtime when working over 40 hours in a single week according to the employees’ complaints.

In an effort to keep their store’s payroll low, these “managers” were allegedly forced to work more than 70 hours a week, and sometimes up to 90 hours a week, without earning overtime, despite doing much the same work as hourly employees. The plaintiffs sought to be represented collectively in a lawsuit that claimed they were misclassified as managers, but the court eventually required that the cases be filed individually, according to Mark Petro, an Alabama-based attorney involved in the effort.

Taken together, the lawsuits filed during Perdue’s tenure paint a portrait of a chain that is alleged to have put extraordinary pressure on its workforce, and that is alleged to have operated in such a way to limit opportunity for Black and women employees. Meanwhile, Perdue prospered greatly, receiving tens of millions of dollars in compensation from the chain, even as profits declined under his management.

Perdue stepped in to run the family-owned business following a brief, unsuccessful attempt to revive Dallas-based textile company Pillowtex, in part by outsourcing that company’s manufacturing jobs. Perdue would later acknowledge one of his greatest areas of expertise at a deposition connected to the company’s bankruptcy filing: “Yeah, I spent most of my career doing that,” he said in response to a question about outsourcing, according to a transcript obtained by Politico.

The company’s demise led to the loss of 7,600 jobs. Asked later about that quote, Purdue had this to say: “Defend it? I’m proud of it,” he said at a 2014 press appearance. “This is a part of American business, part of any business. Outsourcing is the procurement of products and services to help your business run. People do that all day.”

Perdue also ramped up outsourcing at Dollar General, increasing imports from China, as the Intercept has reported. In addition, he pursued a strategy of aggressive expansion, increasing the number of Dollar General stores by almost 30% to 8,205 during his time there.

The immense pressure allegedly placed on managers to keep payrolls low may have impacted those they supervised. Hourly employees reported they were forced to work “off the clock” and had their pay records altered, according to a separate wage theft lawsuit filed in New York District Court in 2006.

The court denied the hourly employees’ request to be considered as a class in 2011 but settled the cases of 26 of the plaintiffs individually in 2013, according to court records. Attorneys who represented the thousands of Dollar General managers who say they suffered from wage theft would not comment on the resolution of those cases.

Dollar General and Perdue did not respond to repeated requests for comment on this story.

DeKalb County Commissioner Lorraine Cochran-Johnson has a problem with the way chains like Dollar General have proliferated in the poorer pockets of her county, which includes parts of Atlanta. She’s spoken to family grocery store owners who refuse to locate near Dollar General stores because they are unable to compete with their low prices, and she has seen firsthand how thinly staffed dollar stores contribute to theft. She was surprised when Sen. Perdue began touting his leadership at Dollar General in his campaign for Senate.

“You go into a community that already has challenges, and you are committed to paying the lowest wage possible, hiring the least amount of people,” she says. “But is that something to be proud of?” Cochran-Johnson has spearheaded a temporary countywide ban on “small-box discount stores” like Dollar General and Family Dollar.

While allegations of wage theft, low pay and gender discrimination during Perdue’s tenure as CEO of Dollar General have previously been reported, Capital & Main has uncovered new evidence of allegedly discriminatory practices at the company while Perdue was at the helm, including those that singled out pregnant women and African Americans. Dollar General was sued by the federal Equal Employment Opportunity Commission for discriminating against Black applicants — legal action that resulted in a $6 million settlement.

Rachel Armington, a cashier at a Florida Dollar General store, was suffering from a difficult pregnancy. She said her requests to sit in a chair went unheeded, according to a 2007 lawsuit filed in U.S. District Court in Jacksonville.

Armington alleged she was derided as “fat” by a manager and was asked to clean up rat droppings and urine from store merchandise. What she claims led to her firing was a request to take time off following the birth of a baby with a life threatening medical condition. The case, one of eight pregnancy discrimination cases filed during Perdue’s tenure, was settled.

But accusations levelled at Dollar General by women employees during Perdue’s tenure do not stop there. A gender discrimination case filed in 2006 became a campaign issue when he ran for the Senate in 2014. More than 2,000 female store managers sued Dollar General, claiming they were paid less than men with the same job title.

Several years after Perdue left Dollar General, the company paid employees a settlement of almost $19 million. Perdue denied wrongdoing on the part of the company in a debate with his then rival for the Senate seat, Michelle Nunn, saying that the lawsuit was “settled five years after I left.” He also downplayed the number of women involved in the suit. “It was less than 2,000 people. We had upwards of 70,000 people at that company.”

What has received less attention is a civil rights case alleging racially discriminatory hiring practices that stemmed from a charge filed in 2004, when Perdue was at the helm of the company. The Equal Employment Opportunity Commission charged Dollar General with conditioning job offers on criminal background checks in a way that disproportionately screened out Black applicants in violation of federal law.

The applicant who filed the initial charge told Dollar General she had a six-year-old drug conviction before starting work at an Illinois store. But her job was allegedly revoked because the chain regarded her conviction as a disqualifying factor for 10 years.

Last year, Dollar General paid $6 million to settle the case. Now the company is under a consent decree to ensure “a fair process” for hiring and one that is not based on “unproven myths and biases about people with criminal backgrounds,” according to a statement by Gregory Gochanour, regional attorney for the EEOC’s Chicago District.

But African Americans employed by the company during Perdue’s tenure have also alleged mistreatment, as well as pay discrimination. Catricea Davis, an African American store manager, allegedly faced harassment from four white employees she supervised, including being called a racist epithet, according to a 2007 suit filed in Federal District Court for the Northern District of Illinois Eastern Division. Her calls to a corporate hotline and a district manager failed to remedy the situation, she claimed.

Davis “was forced to endure the racial harassment because she was unable to find sufficient replacement employees due to the low wage offered by” Dollar General, according to the lawsuit. Because the employees refused to work under her supervision, she found herself working 50 hour weeks, she alleged.

The case was one of at least 15 racial discrimination cases filed during Perdue’s tenure. The parties reached an agreement and the case was dismissed.

Perdue’s growth plans led to a turbulent tenure at Dollar General, and the company saw its profits decline. He embarked on a restructuring plan in 2006 that would involve the closing of 400 stores and the opening of 300 others, according to press reports at the time.

Between his first and last year at the helm of the company, profits declined from $299 million to $137.9 million. In 2007, Perdue left Dollar General after arranging for its sale to a private equity firm, KKR, for $7.3 billion. The company was forced to shell out more than $40 million to fend off shareholder lawsuits that alleged Perdue and other board members had undervalued the company in the deal.

Nevertheless, Perdue profited from his time there. Dollar General paid him $42 million in 2007 and 2008, according to the Atlanta Journal Constitution. “It worked for everybody,” Perdue has said of the buyout. “We saved thousands of jobs with that deal, and I feel like we did it responsibly.”

Today, Dollar General employees still struggle with low pay. The company recently appeared high on a list compiled by the Government Accountability Office of large firms whose employees earn so little they are forced to rely on Medicaid and food stamps. In Georgia alone, almost 1,400 of Dollar General’s workers rely on Supplemental Nutrition Assistance Programs or SNAP.

“Dollar General stores aren’t simply a symptom of economic distress, they are actually driving economic distress,” says Stacy Mitchell, co-director of the Institute for Local Self-Reliance, an advocacy organization tracking the growth of dollar stores. In 2017, Georgia had the second-most Dollar General stores in the country, according to Mitchell.

Years after leaving Dollar General, Perdue would use his time there as a launching pad for his political career, and to connect with women voters.

“I see some of you ladies in the audience got a little twinkle in your eye. We have a few in the state, I think,” he said.

He was warming up a room of Cobb County Republicans with a mention of the discount chain during his first run for Senate. (A video of the 2013 event is posted online.) He wanted them to know that as CEO, he’d created thousands of jobs: “Real jobs,” he said. “Not part time jobs.”

Read the original story on LAProgressive.com.