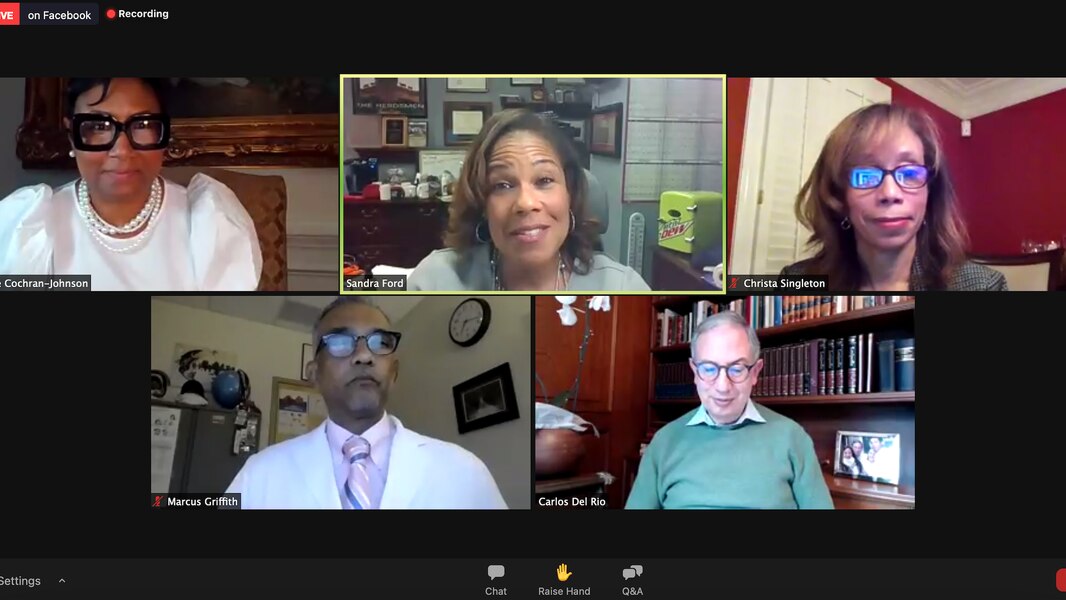 The county has been overwhelmed with seniors attempting to receive their first vaccination shot, which led to the DeKalb Board of Health’s website crashing last Friday. Within hours, the county stopped accepting registrations because they already had more than 20,000 — more than doubling the roughly 8,000 vaccine doses the county had been allocated at the time.

“Our staff can do about 1,000 immunizations a day, so it made no sense to keep the site open because you would be putting in appointments through March, April or May at that point,” she said, adding that 15,000 people’s appointments still need to be scheduled.

Ford was joined by three other doctors to preach vaccine safety to hesitant and skeptical DeKalb residents at the 90-minute town hall, which was moderated by DeKalb Commissioner Lorraine Cochran-Johnson on Zoom. While many residents want the vaccine, the doctors emphasized the lengthy road ahead before there’s a return to semi-normalcy.

“We need people to be patient, but we also need to remind people that we have a way to prevent COVID now. It’s call wear your mask and socially distance,” Dr. Carlos C. Del Rio, interim executive associate dean for Emory School of Medicine and Grady Health System, said. “So please continue to do all of those things and then get your vaccine.”

Ford received lots of questions about vaccine availability in DeKalb from residents fighting for the county’s limited supply of doses.

The county received its first 2,500 doses on Dec. 31, which were administered to frontline healthcare workers and residents and staff at long-term care facilities. Soon after, Gov. Brian Kemp announced the Georgia Department of Public Health’s plan to expand vaccine eligibility to first responders and adults 65 and older, along with their caregivers. Family members and spouses of those groups are not eligible to receive the vaccine at this time. Like most counties, DeKalb is following the state’s vaccine rollout plan.

Ford expressed her frustration about the lack of public providers who have agreed to administer vaccinations. While 77 private practices have agreed to provide the vaccine to their doctors and patients, only two public providers have signed on in DeKalb. That includes a pediatric practice, which Ford said is a moot at the moment because neither vaccine has been FDA approved for children.

“We have been trying to manage this process, but the expectation when the vaccine became available was that this was going to be a community-wide effort,” she said. “It is unreasonable to expect that the entire county was going to be immunized solely by the board of health in 72 hours.”

Ford said she didn’t expect the board of health to become the primary public vaccine provider. She urged residents in the medical field to volunteer to help administer vaccines. She said the high demand for nurses across the country has prevented the board of health from expanding its staff.

Georgia is among the states experiencing a rapid increase in COVID-19 cases, hospitalizations and deaths. As of Monday, there were nearly 40,000 confirmed COVID-19 cases and more than 500 deaths in DeKalb.

“We’re asking for community-wide support, because this is a community-wide issue, Ford said. “If you want to see less hospitalizations, we need to see more people out here assisting with passing the vaccine out.”

Safety and side effects

Cochran-Johnson said she’s heard many African Americans in DeKalb do not trust vaccines, which prompted her to host the town hall. She cited the Tuskegee Experiment — a 40-year medical study that unethically observed the effects of syphilis on Black men — as a reason why many don’t plan to get vaccinated for COVID-19.

Del Rio attempted to quell those fears by bringing up Kizzmekia “Kizzy” Corbett, a Black immunologist at the National Institute of Health who has been credited with crucial COVID-19 vaccine research.

Dr. Marcus C. Griffith, a child, adolescent and adult psychiatrist at Kaiser Permanente, added that vaccines are primarily responsible for the large increase in life expectancy over the past century. In 1900, the U.S. life expectancy was less than 50 years, but it’s currently about 80.

The difference is vaccinations,” he said, citing the near eradication of diseases like tuberculosis and polio.

Roughly 75 questions were submitted before the town hall, and many of them focused on vaccine safety and side effects. The doctors dispelled many common myths, including whether vaccines cause infertility, alter patients’ DNA or have the potential to be lethal. They encouraged residents to speak to their primary care physician if they have any further concerns or specific worries before getting vaccinated.

“It’s like the difference between Coca Cola and Pepsi,” he said. They’re both soft drinks. They’re almost identical, and I can tell you — I’m a Moderna investigator, but I got the Pfizer vaccine. So I tell people that although I work with Coke, I got Pepsi.”

While his example may be sacrilegious to some in Coca Cola’s hometown, his point was that both vaccines are quite similar, and both are roughly 95% effective at preventing COVID-19 sickness. It’s unclear at this point whether a vaccinated person can spread the virus to those who have not been vaccinated.

Ford added that some residents have attempted to bypass the registration process in hopes of getting vaccinated more quickly, which further burdens distribution. She provided a few examples of things to avoid when trying to register.

When someone fills out a registration form on the board of health’s website, they’ll be sent a link to schedule an appointment. That link can only be used by the person who filled out the registration form.

“If you share that link with other people and they make appointments that we don’t have a registration for … when they show up at the site, they have to register now, which takes time,” Ford said, adding that the county has turned people away as a result.

Board of Health spokesman Eric Nickens expanded on that point, adding that people who attempt to schedule an appointment after registration was closed last weekend will have their appointments canceled. He said the county will not tolerate people “jumping in line.” Ford also discouraged people from showing up for their appointment early, which messes up later scheduled appointments.

Healthcare workers and long-term care residents and staff who received their first vaccine dose at the beginning of 2021 will be contacted by the board of health about scheduling their second vaccine dose, Ford said. She added that the county will likely need a dedicated site at some point only for second doses.

When more vaccination slots open, registration will be available at http://ow.ly/xImd50D3AAv or by calling 404-294-3700.

There are other vaccination options in DeKalb. Anyone who has seen an Emory doctor in the last three years can request COVID-19 immunization, Del Rio said. Registration is available at emoryhealthcare.org/covid/index.html. Griffith said Kaiser Permanente is also accepting vaccine registrations at 404-365-0966. Only individuals who meet the state’s vaccine eligibility criteria can register.