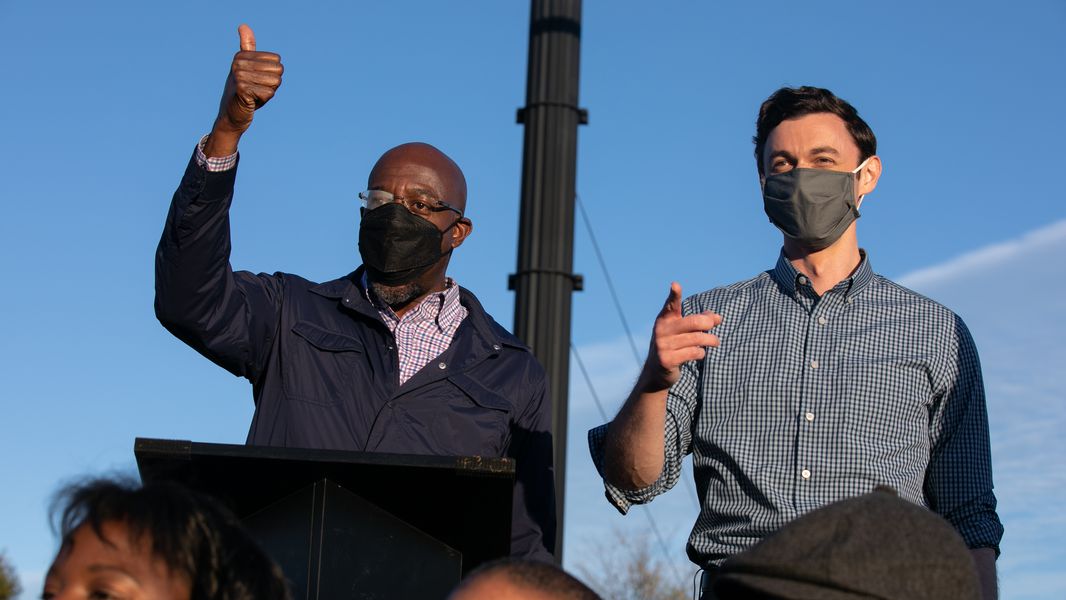 Each made history with the improbable victories. Warnock will become the first Black senator in state history, while Ossoff will be the first Jewish senator and, at 33, the youngest member of the chamber.

The wins were aided by President Donald Trump’s angry – and false – insistence that his defeat in November was the result of a “rigged” election. Trump railed against leading GOP figures throughout the campaign, sending conflicting messages to Republicans about whether they should trust the vote and shifting attention from the consequential races.

The twin victories were the crowning achievement of Georgia Democrats who narrowly flipped the state in November, when a diverse coalition of African American voters and white liberals helped Biden become the first Democratic presidential nominee to win the state since 1992.

And they amounted to devastating blows for Republicans, who had swept every statewide office in Georgia since 2006 and strategically tied themselves to Trump as they pummeled the two Democrats with ominous attacks depicting them as radical extremists.

Warnock, the pastor of Atlanta’s historic Ebenezer Baptist Church, and Ossoff, an investigative journalist, are the first Georgia Democrats to win a U.S. Senate race since 2000. Their stunning victories were fueled by epic turnout from Black voters and dominant performance across metro Atlanta’s suburbs.

They both tied themselves directly to Biden as they promised to help him pursue an agenda that includes $2,000 stimulus checks, sweeping new voting rights legislation, expanded health care access and more public funding to contain the pandemic. 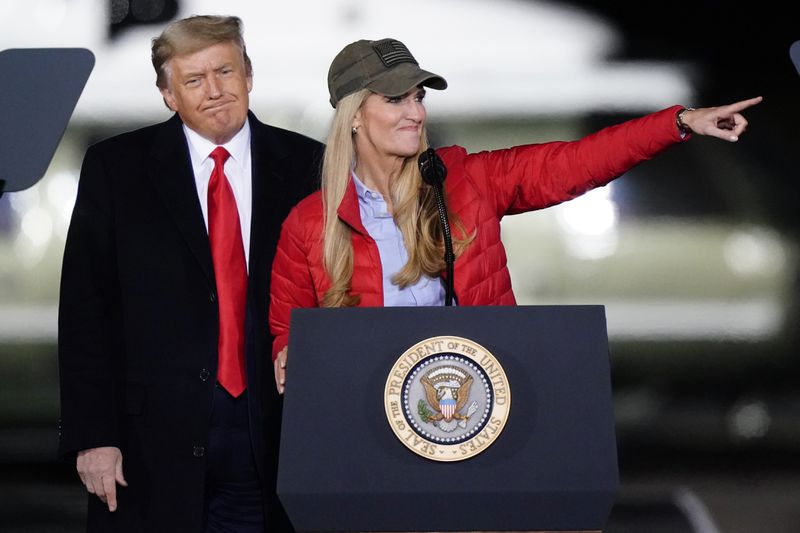 In his victory speech early Wednesday, Warnock spoke of his unlikely path to the Senate and noted that his mother used to “pick somebody else’s cotton” during her childhood in rural Waycross.

“We were told that we couldn’t win this election. But tonight we proved that with hope, hard work and the people by our side, anything is possible,” Warnock said. “May my story be an inspiration to some young person who is trying to grasp and grab hold to the American dream.”

Republicans signaled they would not soon concede the high-stakes races. Perdue’s campaign said it would “mobilize every available resource and exhaust every legal recourse.” And Loeffler told a cheering crowd shortly after midnight that she still had a “path to victory.”

“This is a game of inches,” she said. “We are going to win this election.”

Ossoff’s campaign expressed confidence he would win as the final votes were tallied. And he posted a video shortly after dawn broke thanking voters for electing him – and urging unity to “beat this virus and rush economic relief to the people of our state and to the American people.”

“I am honored – honored – by your support, by your confidence, by your trust,” he said. “And I will look forward to serving you in the United States Senate with integrity, with humility, with honor and getting things done for the people of Georgia.”

The races ended the way they started, with a concerted appeal to each party’s most loyal supporters. On Monday, Biden visited Atlanta to promise Democratic victories would restore “hope and decency and honor” to Washington, while President Donald Trump called on supporters at an evening rally in Dalton to “swamp” the polls.

The stakes were huge: Control of the Senate, where Republicans had a 50-48 edge before the runoffs. Democrats need to sweep both the elections to gain control of the chamber, with Kamala Harris as the tie-breaking vote once she becomes vice president. Republicans needed only win one seat to maintain their party’s grip on the Senate.

The showdowns were set when none of the four candidates in Tuesday’s election received the necessary majority of the vote in November to avoid a second round of voting.

The race was rocked over the weekend by Trump’s demand to Secretary of State Brad Raffensperger to “find” enough votes to reverse his November election defeat in Georgia. Democrats framed the recording as a brazen attempt to undermine democracy, while the GOP campaigns sought to minimize it.

Though the recording was an unexpected bombshell, Trump’s influence shaped the race from the outset. The two Republicans have aggressively appealed to the president’s die-hard devotees, backing his push for $2,000 stimulus checks and echoing his debunked claims of widespread voting fraud. 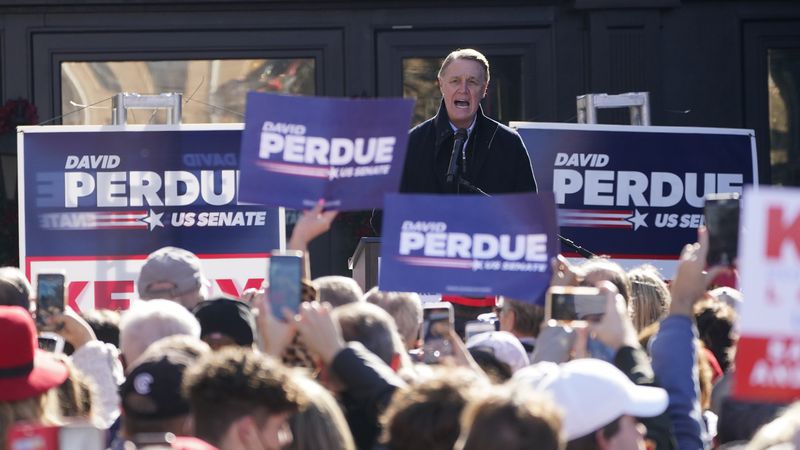 And on the eve of the election, both Republicans announced they supported the doomed effort by some Senate Republicans to challenge the Electoral College results in Congress on Wednesday. Loeffler was greeted with cheers — and chants of “fight for Trump” — when she announced the decision at the Dalton rally with the president.

Even after defeat, Loeffler said she plans to return to Washington on Wednesday in a futile effort to contest Biden’s victory in Congress.

“We are going to keep fighting for you,” Loeffler told the crowd at her election watch party.

Ossoff and Warnock framed their campaign around an image of a post-Trump America where Democrats can push measures promising to boost funding to fight the pandemic, expand health care access and adopt new voting rights legislation.

They were bombarded by attacks from the two Republican incumbents and their allies, who aimed their appeals at the party’s most conservative factions by describing the Democrats as “radical liberals” and warning that only GOP control of the Senate could “save America” from socialism.

The Republicans also had to face down tough attacks, including numerous ads accusing the incumbents of profiting from the coronavirus pandemic through stock transactions made on their behalf. Both say that federal investigators reviewed their stock deals and cleared them of any wrongdoing.

Loeffler’s defeat is a blow to Gov. Brian Kemp, who picked her to fill the seat over the objections of Trump. She survived a tough challenge from the president’s preferred pick, U.S. Rep. Doug Collins, emerging as the leading Republican in a special election of 21 candidates to gain a spot in the runoff.

Warnock had an easier path to November, having consolidated support from state and national Democrats before he entered the race. The first-time candidate, whose church is the spiritual home of the Rev. Martin Luther King Jr., cast himself as a moral voice for a Congress in conflict.

The other contest featured Perdue, a former Fortune 500 chief executive who emerged from a crowded field in 2014 to win his first term. He was one of the earliest supporters of Trump, and depicted Ossoff as an inexperienced waif unprepared for the rigors of the Senate.

Ossoff relentlessly painted the Republican as a crooked member of the Washington establishment, and the Democrat leaned on his experience running an investigative journalism firm to frame himself as a crusader against corruption.

The GOP incumbents were hobbled by a president who has engaged in unrelenting open warfare with state GOP leaders who defied his calls to overturn the state’s election. At Monday’s rally, he promised to return next year to wage campaigns against both Kemp and Raffensperger, two of his favorite punching bags in Georgia.

Democrats faced their own challenges. The biggest was whether they could draw back to the polls the coalition of African American voters and Atlanta suburbanites who helped fuel Biden’s slim victory in Georgia, this time without a presidential contest on the ballot.

And all four candidates had to overcome exhaustion from voters bombarded by an onslaught of ads, teams of canvassers, text messages, digital messaging and other appeals to vote. Celebrities cajoled them to vote, and big-name politicos have fanned out across the state to hold rallies.

More than $830 million has been spent on the races, an astonishing total that will only rise as the final spending comes into clearer view. And more than 4.4 million Georgians cast their ballots, surpassing the number of votes cast in Georgia during the 2016 race for the White House. 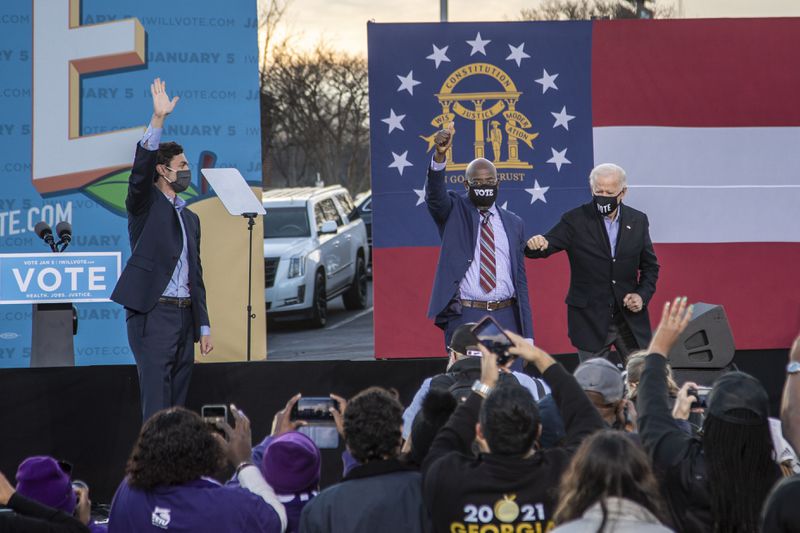 DeKalb will offer COVID-19 vaccine to the public next week, reduce locations for testing