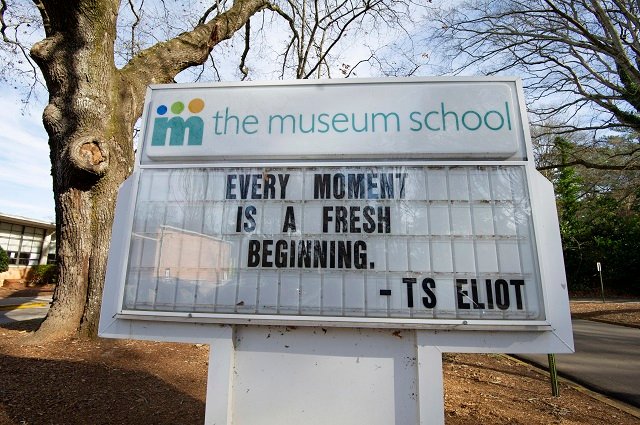 The Museum School of Avondale Estates. Photo by Dean Hesse.

The future is once again murky for The Museum School of Avondale Estates following a legal threat from DeKalb County Schools over the Georgia Board of Education’s decision to deny the school’s charter.

But the state BOE on June 9 voted 7-7 twice on the issue, once to reconsider its earlier denial of The Museum School’s charter with DeKalb County Schools and once to deny the charter petition a second time. The state BOE will need to soon meet again to discuss the matter, with a July 1 deadline quickly approaching. That’s when the school’s current charter with DeKalb County Schools will expire and its charter with the state of Georgia is expected to begin.

The threat of a lawsuit has silenced the parties involved in the dispute over the school’s future. Representatives at The Museum School weren’t immediately able to comment. Ditto for the State Charter School Commission and state BOE members. DeKalb County Schools has repeatedly declined to respond to messages seeking comment about the situation.

The state BOE in April denied the school’s charter renewal petition in an 8-6 vote. The state’s denial followed the DeKalb County School Board’s decision to give the school a three-year conditional renewal. The Museum School urged the state BOE to deny the renewal petition to pursue becoming a state charter. Since 2013, when the current State Charter School Commission was developed, the Georgia BOE has never denied a renewal petition approved by a local board, state BOE Chair Jason Downey said.

That April denial cleared the way for The Museum School to become a state charter and to remain in its current location at the old Forrest Hills Elementary building located on Forrest Boulevard in greater Decatur. Charter schools operate independently of school districts through agreements called charters. In exchange for autonomy, the schools agree to meet higher academic standards. Local charters are created by a three-party agreement between the school, the local school board and the Georgia Board of Education. The Museum School’s agreement with DeKalb County Schools expires on June 30, 2022.

But by denying the charter renewal with DeKalb County, The Museum School became eligible to become a state charter school.

The state BOE’s denial was followed by an approval by the State Charter Schools Commission in May.

And that seemed to settle the matter, until the state BOE unexpectedly called a special meeting on June 9, which was recessed and concluded on June 10. Much of the June 9 meeting was spent in a closed-door executive session. On June 10, the board voted 7-7 twice, leaving the matter unresolved.

The June 9 meeting began at 2 p.m. A records request by Decaturish reveals that at 12:39 p.m. on June 9, Michael Deariso, an attorney for the DeKalb County School District, told the state BOE it needed to reconsider its vote.

“On behalf of the DeKalb County Board of Education (DCBOE) and the DeKalb County School District (DCSD), I write to request that the State Board of Education (SBOE) reconsider its vote of April 11, 2022, regarding the charter renewal of The Museum School of Avondale Estates (Museum),” he wrote. “Specifically, it is requested that the SBOE accept the renewal that was granted by the DCBOE.”

“In closing, it is again requested that the SBOE reconsider its vote that was taken on April 11, 2022,” Deariso said. “The DCBOE and the DCSD reserve their rights to pursue this matter in court, depending on the SBOE’s decision at today’s specially called meeting. I also request that you share this email with the full SBOE.”

The deadlock on the state BOE is the latest twist in a saga that could have implications for charter schools around the state of Georgia.

The shotgun marriage between DeKalb County Schools and The Museum School began in 2011, and the school moved into its current home in 2012.

It has an enrollment of almost 600 students, and uses the “museum model.” The school partners with local museums as part of its curriculum, holding “Exhibit Night” four times a year. During Exhibit Night, students play docents, taking visitors on a tour and answering their questions about what they’re learning.

The SCSC made the rule change for budgetary reasons. State charter schools get extra money from the state because they don’t get any local funding.

The rule change complicated things for The Museum School.

Experts Decaturish spoke to say The Museum School’s dilemma is unprecedented in the brief history of charter schools in Georgia.

“This has not been tested, so there is no precedent,” Lewis said.

Complicating matters is the ownership of the building. The Museum School in its renewal application asked DeKalb County Schools to turn over the deed for the building.

The county wants to change the terms of the school’s lease, so the school community won’t be reimbursed for the cost of building improvements they’ve paid for.

The Museum School is considering a lawsuit to resolve this dispute. Attorney Micah Barry is an instructor at the University of North Georgia who specializes in educational employment law. He has dealt with charter schools in his practice. He questions why the ownership of the building is at issue here.

He said it’s his understanding that conditional charter renewals aren’t allowed in Georgia. School districts can’t change the renewal petition. They can make suggestions. But a district’s school board may only approve or reject a petition, Barry said.

“The way the law is designed, if anything is going to be changed, it can only be changed by agreement because it is basically a contract,” Barry said.

Lewis, the charter schools expert, said while he is not certain whether the county schools could legally approve a conditional renewal, it’s not a good look for the school district. It gives credence to DeKalb County Schools’ bad reputation within the Georgia’s charter school community, he said.

“While my gut says I don’t think it’s illegal, it is certainly a horrible authorizer practice,” Lewis said. “It is basically putting a gun to the charter’s head and saying, ‘Take it or leave it.’”

To read our previous story with more details about the legal complexities of this situation, click here.